Former Secretary of Defense James Mattis: "I had no choice but to leave" Trump administration 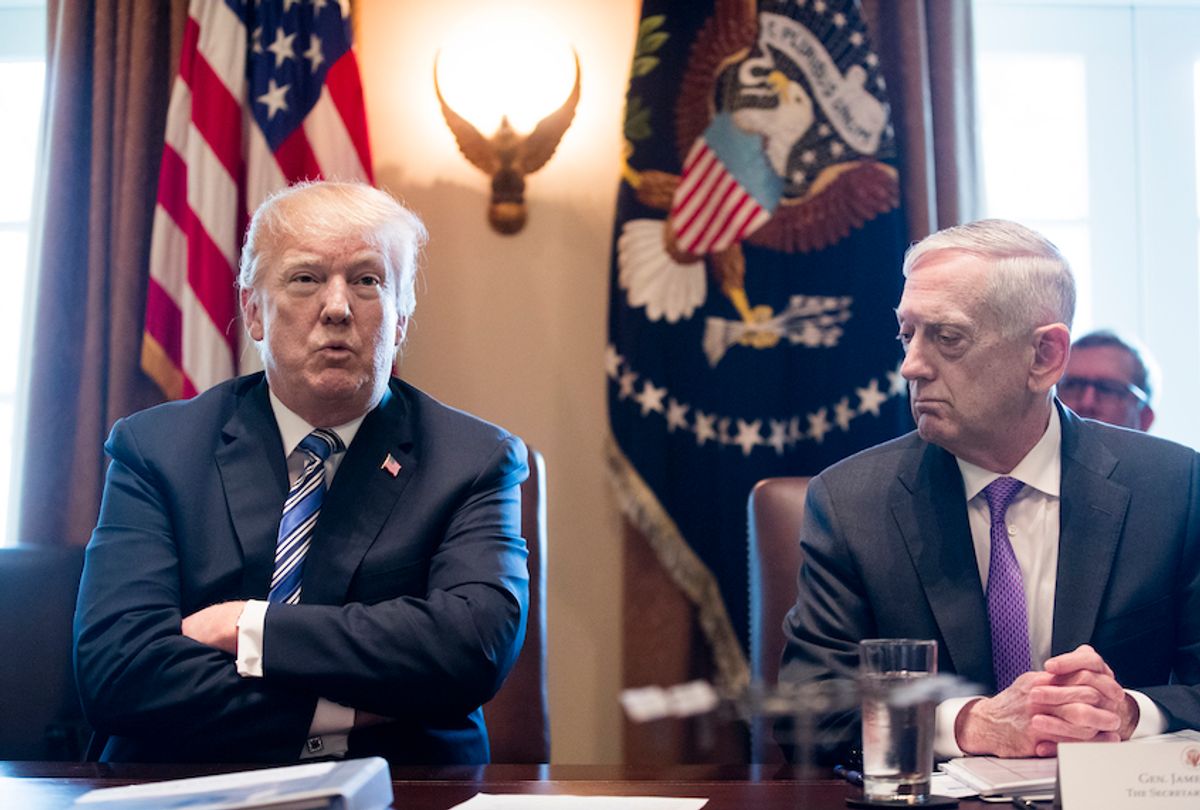 U.S. President Donald J. Trump (L) speaks beside US Secretary of Defense Jim Mattis (R) during a meeting with members of his Cabinet, in the Cabinet Room of the White House March 8, 2018 in Washington, DC. (Michael Reynolds-Pool/Getty Images)
--

James Mattis, the former defense secretary to President Donald Trump, says he had "no choice but to leave" the administration.

In a rare interview, Mattis, a former Marine Corps general who has sought to keep a low profile, explained why he left Trump's Cabinet after two years in his post. While he appeared reluctant to offer details about his unceremonious departure, he pointed to his resignation letter, which was included in his upcoming book, "Call Sign Chaos: Learning to Lead," to highlight his reasoning.

"I had no choice but to leave," Mattis told the Atlantic's Jeffrey Goldberg, breaking his eight-month retreat from the public eye. "That's why the letter is in the book. I want people to understand why I couldn't stay. I've been informed by four decades of experience, and I just couldn't connect the dots anymore."

Mattis reportedly demurred when asked about Trump, noting he does not believe it is appropriate for him to speak out publicly about any disagreements he may have had with the president. He explained that while he "may not like a commander in chief one fricking bit," attacking the president could weaken the country "when we're up against real threats. I mean, we could be at war on the Korean peninsula, every time they start launching something."

"They still have the responsibility of protecting this great big experiment of ours," he continued. "I know the malevolence some people feel for this country, and we have to give the people who are protecting us some time to carry out their duties without me adding my criticism to the cacophony that is right now so poisonous."

Mattis stepped down from the Trump administration in December 2018. His resignation letter pointed to stark differences with the Trump on a range of foreign policy issues — from the president's hasty decision to withdraw from Syria and Afghanistan to his approach to North Korea. Mattis refused to endorse Trump's decision to pull out of Syria and Afghanistan and resigned after his pleas were rejected. He stepped down in January, two months before his departure date, after Trump had grown frustrated by the idea that he was being publicly rebuked by a member of his administration.

"Because you have the right to have a secretary of Defense whose views are better aligned with yours on these and other subjects, I believe it is right for me to step down from my position," Mattis wrote in his resignation letter.

In an except from his forthcoming book, adapted into an essay for the Wall Street Journal, Mattis wrote, "I did as well as I could for as long as I could. When my concrete solutions and strategic advice, especially keeping faith with our allies, no longer resonated, it was time to resign."

Although the general's criticisms are deeply veiled, he told the Atlantic he may one day speak freely about his experience working in the Trump administration.

"There is a period in which I owe my silence," he said. "It's not eternal. It's not going to be forever."