After initial denials, Alabama's Republican governor admits she wore blackface for a 1967 sorority skit at Auburn 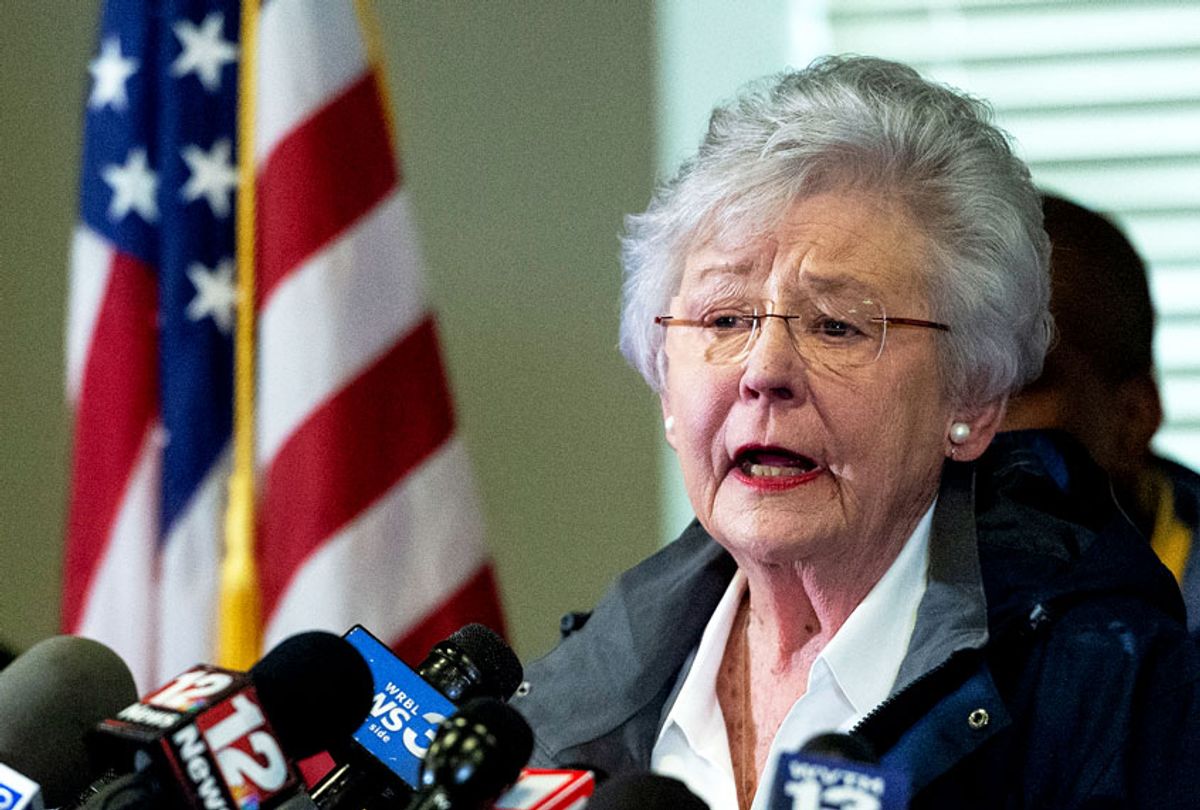 Alabama Gov. Kay Ivey admitted that she wore blackface in a racist skit while attending Auburn University in the 1960s, after her office had initially denied the report.

After first denying that she participated in the sketch, Ivey said she could not remember the incident but admitted it must have taken place after a recording surfaced of her ex-husband discussing the skit. Ivey apologized but said she would not resign.

“I fully acknowledge — with genuine remorse — my participation in a skit like that back when I was a senior in college,” the Republican said Thursday. “I offer my heartfelt apologies for the pain and embarrassment this causes, and I will do all I can — going forward — to help show the nation that the Alabama of today is a far cry from the Alabama of the 1960s. We have come a long way, for sure, but we still have a long way to go.”

In February, university newspaper The Auburn Plainsman published a report including racist photos found in old college yearbooks. The photos included Ivey’s sorority, Alpha Gamma Delta, performing a sketch in 1967 while wearing blackface with exaggerated caricatures of black people on their shirt pockets. The caption described the group as “minstrels,” a term frequently used for white actors who wore blackface.

"After that time, she remained a member, but she took no further roles in the sorority because her focus shifted during her freshman year to SGA activities," her spokesperson told the Plainsman. “Other than that, we know nothing about (the photo).”

Earlier this week, rumors began to circulate that Ivey had contacted state lawmakers to apologize for her role in a racist college skit, AL.com reported.

On Thursday, an audio recording of a 1967 radio interview surfaced in which Ivey and her then-fiancé, Ben LaRavia, describe a skit at a Baptist Student Union party at which Ivey wore blackface.

"We were acting out this skit called 'Cigar Butts,'" LaRavia said in the interview, adding that Ivey wore overalls with “black paint all over her face.”

"I could not go into a lengthy explanation, but to say the least, I think this skit, it did not require a lot of talent, as far as verbal talent. But it did require a lot of physical acting, such as crawling on the floor looking for cigar butts and things like this,” he recalled.

It’s not clear whether LaRavia was describing the same skit as the one pictured in the yearbook, or some other occasion. The yearbook photo did not include any students wearing overalls.

An Ivey spokeswoman told the Montgomery Advertiser that the governor heard the recording for the first time on Tuesday and began to contact state lawmakers. The recording was discovered during a university project to digitize old media.

Ivey posted a video apology on Thursday, but said she still could not recall the incident.

“I have now been made aware of a taped interview that my then-fiancé, Ben LaRavia, and I gave to the Auburn student radio station back when I was SGA Vice President,” she said. “Even after listening to the tape, I sincerely do not recall either the skit, which evidently occurred at a Baptist Student Union party, or the interview itself, both which occurred 52 years ago. Even though Ben is the one on tape remembering the skit — and I still don’t recall ever dressing up in overalls or in blackface — I will not deny what is the obvious.”

“While some may attempt to excuse this as acceptable behavior for a college student during the mid-1960s, that is not who I am today, and it is not what my Administration represents all these years later,” she added.

Some Democratic lawmakers have called for Ivey to resign in light of the news.

“If she did that she is insensitive. She needs to step down. She needs to be governor of all people,” state Rep. John Rogers told AL.com. “It is not acceptable any time or place. Do us a favor and step down.”

Alabama NAACP President Benard Simelton said in a statement that the decades-old skit “apparently still shapes who she is today.”

“She refused to meet with the NAACP two years ago to discuss race relations in Alabama,” he said. “She has not taken steps to expand Medicaid in Alabama, she gladly signed bills to protect one of the most racist American symbols, the Confederate flag and monuments."

The Alabama Republican Party issued a statement defending Ivey, praising her for "taking ownership of and responsibility for this 50 plus year old incident."

Ivey’s office said she has no plans to resign.

“The governor’s commitment to serve the state is unchanged and unwavering,” a spokesperson told AL.com.

Ivey’s case comes months after Virginia Gov. Ralph Northam, a Democrat, came under fire after he admitted to wearing blackface in college. Despite calls for him to resign from both parties, Northam remains in office.

In the resurfaced interview, Ivey and LaRavia were heard discussing how they might view the skit when they look back on it in the future.

“Should each of us ever reach a position that we could not remember back to our college days,” LaRavia said, “all we’d need to do is come back to the Auburn BSU and look at some of those pictures they took that night and I understand we would be quite humbled at this.”