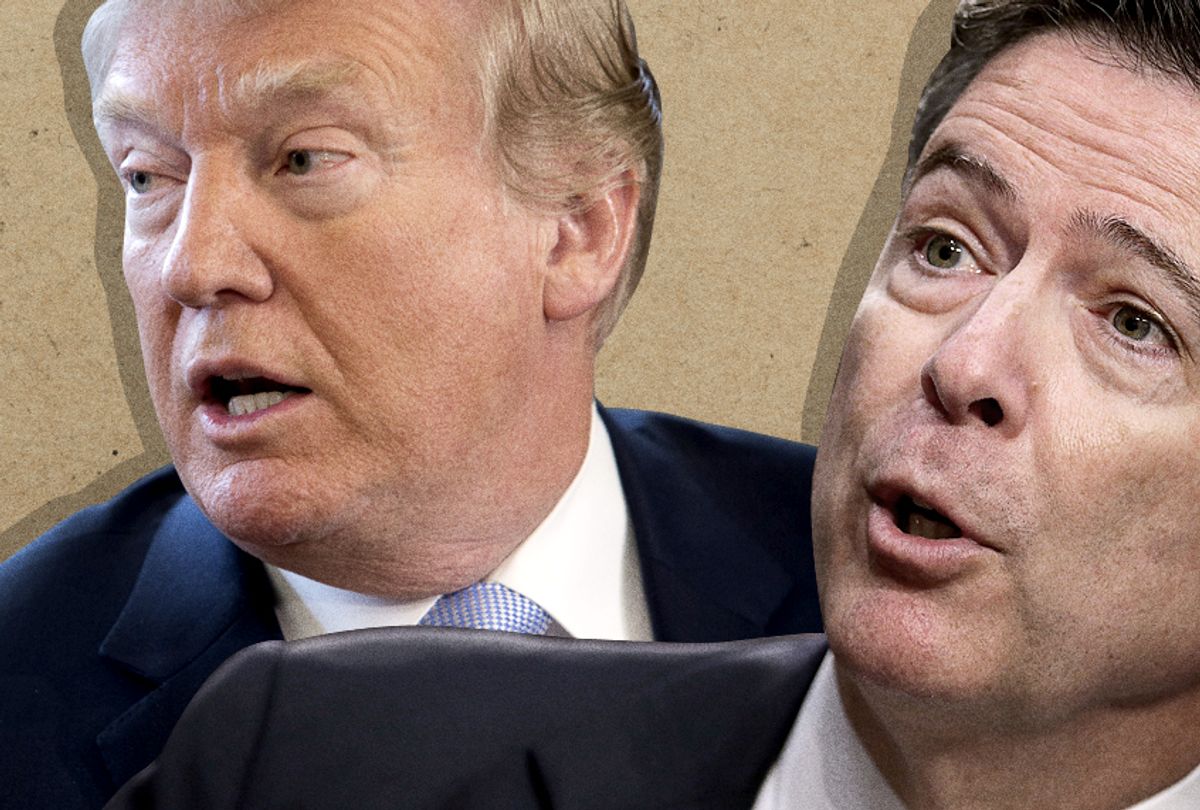 The highly anticipated Justice Department inspector general's report on whether former FBI Director James Comey broke any laws when he shared some of his memoranda with the media was released yesterday. The report did not find that Comey had broken the law or released any classified information, which was certainly a terrible disappointment to the right-wing fever swamp which had hoped to see Comey hauled off in leg irons. It did, however, find that he had defied FBI policy after he had been fired by the president and was highly critical of the former director's judgment, leading to much delight and excitement among his critics.

Virtually all of the facts about this have been known since Comey famously testified before Congress in the summer of 2017. He made it clear at that time that his motivation was to trigger a special counsel to investigate election interference and he told the inspector general's investigators that he didn't pass his decision up the line at Justice because he didn't want to make officials there involve themselves in what he believed to be a whistleblowing situation.

While the IG did not find that Comey had released classified information, the report reveals that some of the other players in this drama, such as former deputy director Andrew McCabe and special agent Peter Strzok, went over Comey's memos after the fact and found that some of the information was classified at the lowest level of "confidential," for which Comey was not held responsible.

The irony in all of this is thick. After all, it was Comey's defiance of DOJ policy in the summer and fall of 2016 that arguably led to Donald Trump's election victory. First Comey went to the press to ostensibly clear Hillary Clinton of wrongdoing in the email case, while criticizing her for being reckless and irresponsible. Then he made the even more dubious decision to reopen the case in October, just days before the presidential election.

Clinton must have poured out a couple of stiff shots of Jameson when she read that report. As David A. Graham pointed out in The Atlantic:

Few of us can imagine how it felt for Clinton to be simultaneously cleared of criminal wrongdoing and also publicly savaged, but today, Comey probably has a pretty good sense of precisely how that feels.

It's hard to refrain from saying "What goes around comes around," but that would trivialize what is actually a very serious situation. Comey's ill-conceived statements in 2016, which arguably tipped the election to Trump, are what one might term his original sin. The results have been catastrophic. That error in judgment then led directly to Comey's firing, after he failed to show Trump the blind fealty the president demands of everyone in government.

Comey's further refusal to help Trump cover up the series of questionable interactions between the Trump campaign and agents or proxies for the Russian government has now led to a very confusing policy by the Department of Justice. Benjamin Wittes at Lawfare puts it this way:

The Inspector General of the Justice Department has determined that it is misconduct for a law enforcement officer to publicly disclose an effort to shut down his investigation.

I would add that the effort, in this case, was by a person who was implicated in that investigation — and who also happens to be the most powerful person on earth — which adds up to obstruction of justice. Those facts were laid out clearly in the Mueller report. Essentially, this policy adds yet another layer of impunity to the presidency.

One might have assumed that the Republicans would be happy to let all these dangling pieces of the seemingly dying Russia investigation go, but they seem to be determined to keep it alive.  As far as we know, Attorney General Bill Barr's internal investigation of the Intelligence agencies continues apace.  And  the case of Andrew McCabe remains open as well, with reporting suggesting that the government plans to indict him for giving the press negative background information on Hillary Clinton and then lying to the FBI about it.

By all accounts, McCabe plans to fight this all the way and will produce all the tweets and comments by the president demanding his prosecution as evidence that his firing and the indictment were political. Since this is the sort of infraction that is normally handled by reprimand or firing — both of which have already happened — a prosecution indictment would certainly appear to be unusual. It looks as though the attorney general and his fellow Trumpists want a show trial.

They aren't the only ones. Among the excited Republicans, no one is more aroused than the chairman of the Senate Judiciary Committee, South Carolina's Lindsey Graham. He appeared on Sean Hannity's Fox News program on Wednesday night to announce that he expects to start his own "investigation into the investigation" any day now. Graham has quite the list of witnesses he expects to call, including McCabe, Former CIA Director John Brennan and former Director of National Intelligence James Clapper. But he believes the single most important question about the Russia investigation is what the president knew and when he knew it — the president in question being Barack Obama.

Graham told Hannity,  “I can't imagine an investigation of the Republican nominee for president — a counterintelligence investigation of his campaign — was not approved at the highest level. I cannot imagine it happening without somebody in the White House knowing about it." Hannity asked if that would mean putting former president Obama under oath. Graham replied, "Absolutely."

This week alone, Trump treated the G7 summit in France as an infomercial for his private Florida golf club and was reported to offer pardons to anyone who will illegally seize land on the border to build his wall — which he insists must be painted black and have spikes on the top. If that level of medieval fantasy, blatant corruption and abuse of power doesn't merit an impeachment charge then literally nothing does. Yet the Republicans have the chutzpah to rend their garments and call for the smelling salts over James Comey's DOJ policy infractions, and to launch a campaign to investigate Barack Obama.

Many people out there were hoping for riveting public hearings on the Russia investigation, but I don't think that was what they had in mind. Right now it appears a Republican show trial may be all we get. The Democrats' continued failure to understand the scope of the GOP's shameless pursuit of power is stunning.