This ingredient is a solo home cook's secret weapon 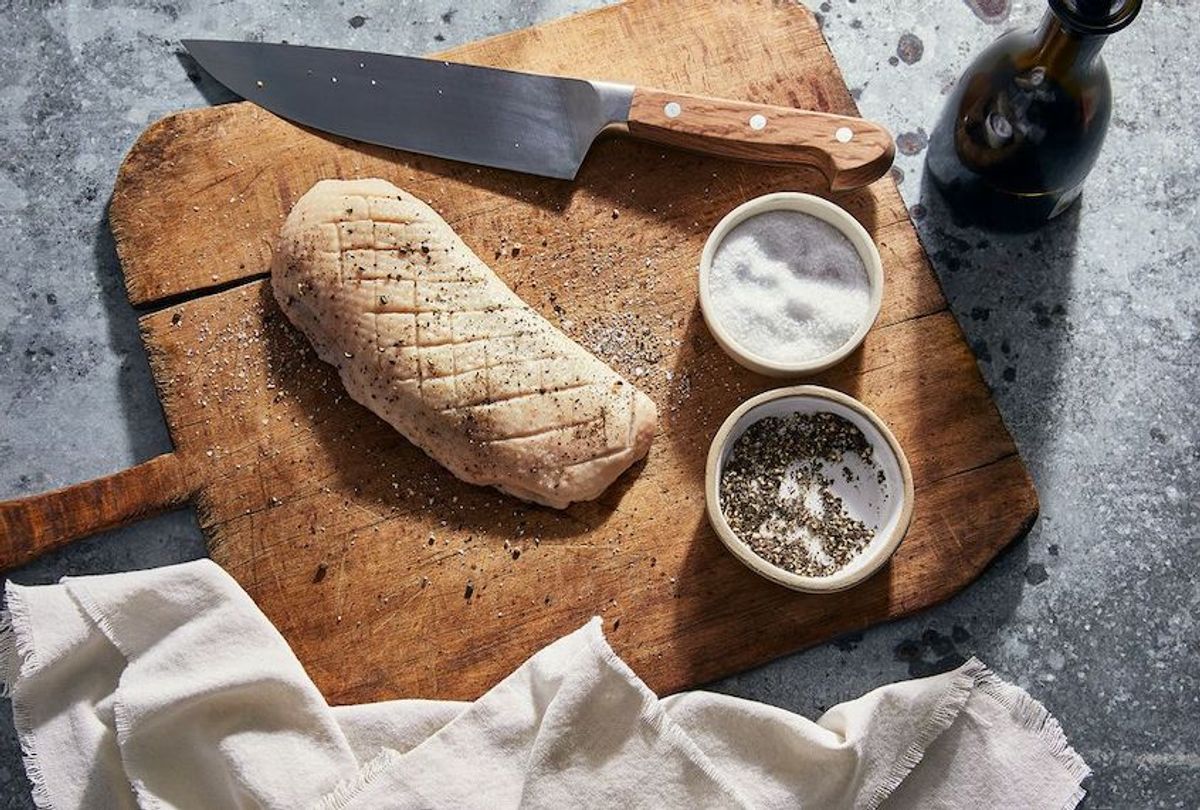 Anyone who says there's no such thing as bad pizza has never burned the roof of their mouth on bad pizza. I'd much rather forgo pizza altogether than eat bad pizza, in the same way that I'd much rather stay home alone than waste my time on a bad date. I once canceled on a date because I had been so burned by a couple bad dates before that, I didn't want to risk another wasted night.

Avoidance is often the best antidote to failure.

It had been a long week (and nights to myself rare). So instead, I decided to have dinner alone at my favorite Italian restaurant by my apartment, ordered a caprese, fettuccine Alfredo, and a carafe of house red, and finished the whole thing by myself. I went home and took a bath, then fell asleep cuddling with my dog.

As far as I'm concerned, I was a great date.

I feel much the same way about my dinners as I do my dates. Each meal is an opportunity for success, but also for failure. The latter is, of course, the point of life and learning, especially in the kitchen. How will you discover your next favorite recipe if you don't take a chance and try something new?

Take, for instance, duck breast. Perfectly cooked, it can be one of the most delicious things in the world. But so many are daunted by it because a) they've never cooked it before and b) they've never even had it.

Contrary to popular belief, a boneless, skin-on duck breast really isn’t very hard to cook at all. In fact, I find that it has the highest success rate compared to more common proteins like chicken breast, steak, and even seafood, not least because it's nearly impossible to overcook. There’s so much insurance from the fatty skin that no matter what you do, the meat will taste crispy on the outside and juicy on the inside. A duck breast almost asks of you your negligence: The fat needs time to render in the pan, untouched, left to do what it does best.

The more difficult part about cooking duck at home is finding it at your local grocery store in the first place. There's always Whole Foods and Costco; they're likely to stock duck breasts. You can also order them online, if that's your thing, or get them at your local butcher. Even I'll admit that I only ever buy duck at Dickson's, a small-farm meat stand in Chelsea Market — but this is because they're one of the few purveyors in my city who sell individual breasts.

All this to say, duck isn't as ubiquitous as other proteins, for sure, but if you can find a supplier, your life will be forever changed. It's a staple in my weekly line-up not because it's fancy, but because it's actually quite affordable for a single breast.

That’s the thing about cooking for yourself: When it’s just you, the net value of your grocery bill will be significantly cheaper than when you're cooking for six to eight, especially with pricier proteins like filet mignon, shrimp, and scallops that can add up when scaled up. But when it's just you, a single portion of said steak, or seafood, or duck breast can be the equivalent of, say, a box of Cheez-Its. Or a half-gallon tub of ice cream. Or a happy-hour beer. 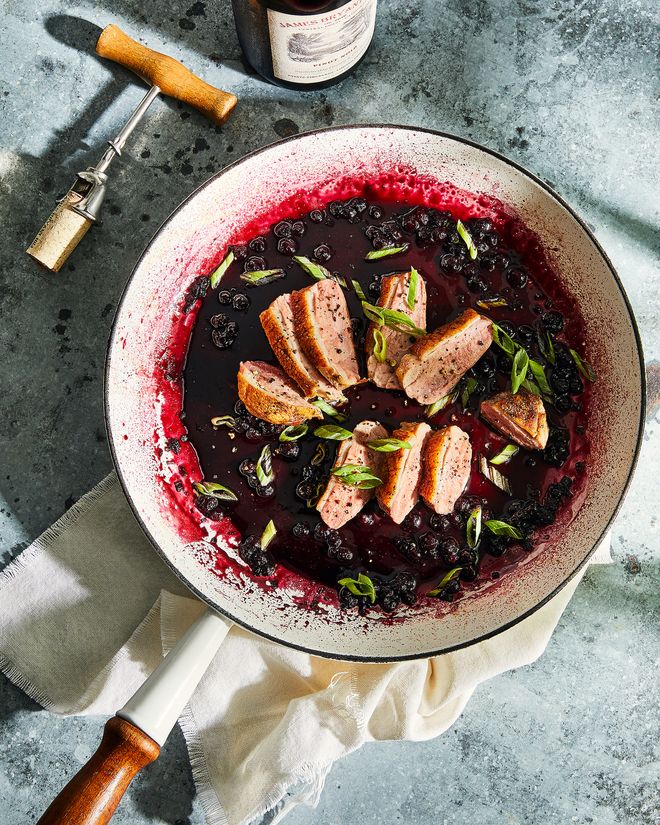 The key to a crispy duck breast is scoring the skin and starting from a cold pan. Photo by Bobbi Lin. Food stylist: Olivia Mack McCool. Prop stylist: Amanda Widis

How to cook a duck breast

Score a crosshatch pattern across the duck’s skin, making sure not to cut through the flesh. Salt both sides generously, then place skin-side down into a cold skillet. (I like to use nonstick here because I'm greedy for the duck fat that renders out and don't want to lose any of it—the promise of future roasted potatoes is too great — but cast iron would work well, too.)

Turn the heat on to about medium-low. The duck breast cooks almost entirely on its skin side, for a good 10 to 15 minutes, after which you can flip it to finish cooking on the flesh side for just 2 minutes — though, as ever, you should go by the meat's internal temperature (about 135°F for a nice medium-rare and closer to 140°F for medium), not least because the thickness of the breast will determine its total cook time. Anyway, the duck will continue to cook in its own residual heat as it sits on your cutting board, waiting to be carved. Meanwhile, you can prepare the pan sauce.

The beauty of a pan sauce is that you've already started building up plenty of flavor cooking the protein. So in this same deliciously dirty skillet, add an allium (any allium you've got). Shallots are great mini-onions for when you're cooking for one, as are scallions. For this recipe, I went with the white parts of a single scallion (so I could garnish later with the green parts). But the half-onion sitting in the back of your crisper drawer, slowly drying up like a raisin, will taste great here too.

Next, something sweet. I’m obsessed with those smaller, deeper-flavored wild Maine blueberries and love cooking with them any chance I get. Obviously they can be harder to come by if you don't live in the Northeast, which is why I often buy them frozen. (Go for regular blueberries if you can't find Maine.)

In with the blueberries goes a little ruby Port, a sweet, deep-red fortified wine from Portugal. Fortified wines are great for solo cooking because you can use a smidgen and just put it back on the shelf (whereas a bottle of wine should be finished immediately).

Speaking of which, I've tried making this with red wine multiples times and never loved the flavor; keep in mind that, should you decide to go that route due to resources, you may need to add some sugar to turn it into a glaze (think maple syrup, honey, or even plain old granulated). If you don’t have Port or don't want to buy a new bottle just for this, I’d go with another fortified wine like sherry or sweet red vermouth. Whatever you use, let it bubble away with the berries and reduce until very sticky.

Together, the Port and blueberries are already quite sweet — though complex in flavor — which is why I add fish sauce for savory funk and vinegar for tang. A pat of butter gets stirred in at the end to finish the silky pan sauce.

I like to carve the crispy duck breast thinly and lay over the finished sauce, then have this with roasted potatoes or a crunchy, bitter salad, such as frisée or radicchio. But more often than not (if I'm being truthful), I just eat the duck straight out of the pan with my fingers, dragging each juicy sliver through the sweet, glossy sauce.

Directions
1. Score the duck’s skin with a cross-hatch pattern, making sure not to pierce the actual flesh underneath. Season both sides with salt and place, skin-side down, in a cold skillet. Turn on the heat to medium-low and let cook on the skin side 10 to 15 minutes, until much of the fat has rendered out. Flip and sear the other side 2 minutes, or until internal temperature of the meat is 135°F, medium-rare. Set aside to rest while you make the pan sauce.

2. Pour the duck fat out into a glass or ceramic container (save that for potatoes another day), leaving about 1 teaspoon behind. Sauté the white parts of the scallion 1 minute, seasoning with salt. Splash in the Port and frozen blueberries and let reduce until very syrupy, about 10 minutes. Add the vinegar and fish sauce and let warm through for a few seconds. Take off the heat and add the pat of butter, moving it around constantly until fully melted and sauce is glossy.

3. Transfer sauce to a plate. Carve the duck breast into thin slices and lay over the sauce. Garnish with the green parts of the scallion and freshly ground black pepper. Eat with roasted potatoes or a side salad, like frisée or radicchio.