Sexy vampires had a good run, but "hunky blue aliens falling in love with Earth women" are having a moment now 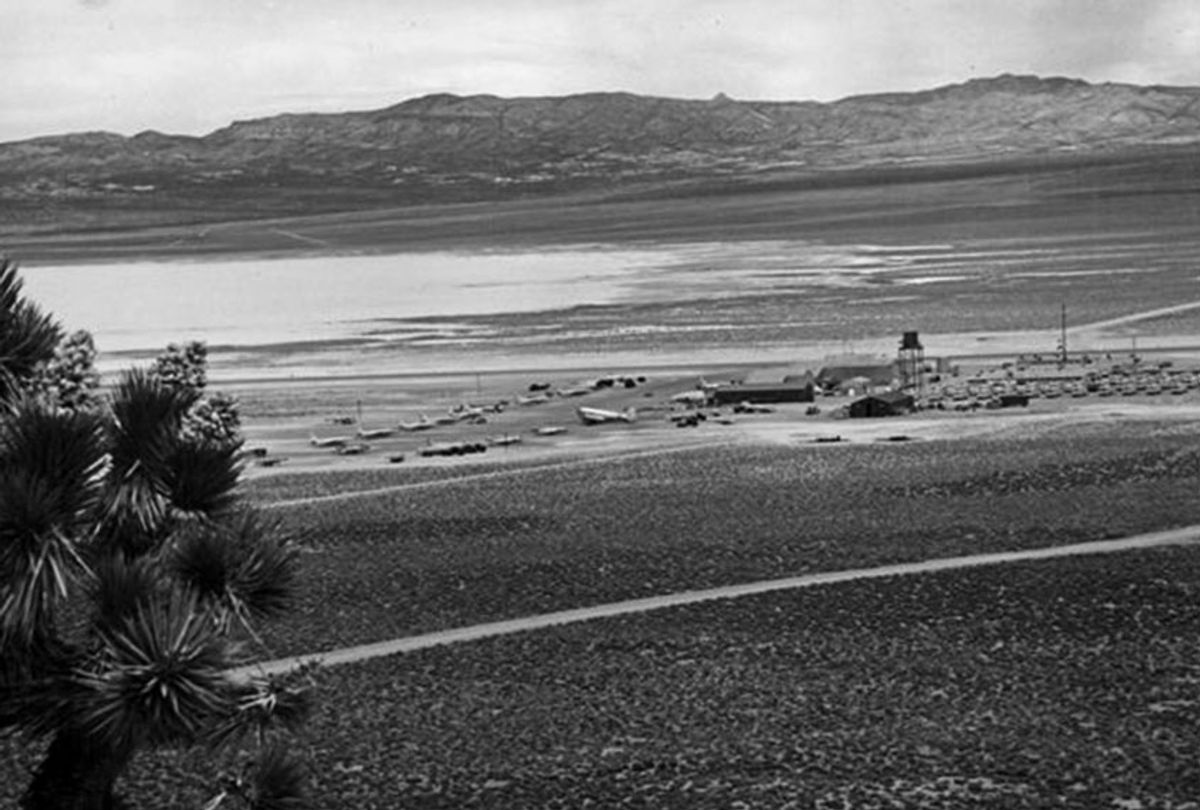 At first glance,“Obsidian,” the first book in Jennifer L. Armentrout’s New York Times bestselling “Lux” series, looks like a pretty typical romance novel. There’s a woman with her arms draped around the neck of a handsome man, his green eyes piercing through the cover. He’s absurdly good-looking, almost otherworldly.

Flip to the description: The book’s protagonist Katy has recently moved to West Virginia and resigned herself to a life of “dodgy internet access and a whole lot of boring” until she spotted her hot but arrogant neighbor Daemon. They don’t get along.

“But when a stranger attacks me and Daemon literally freezes time with a wave of his hand, well, something … unexpected happens,” the description reads. “The hot alien living next door marks me.”

It continues: “You heard me. Alien. Turns out Daemon and his sister have a galaxy of enemies wanting to steal their abilities, and Daemon’s touch has me lit up like the Vegas Strip.”

Over the next several books, an intergalactic romance develops as the two ward off both alien enemies and the Department of Defense. According to Armentrout, that last bit has been particularly interesting to her readers this summer as interest in Area 51 and its purported secret history of alien life form containment has heated up.

“My ‘Lux’ readers have been all over the whole Area 51 [craze],” she told Salon. “They're having a field day with it, especially since Area 51 is in the ‘Lux’ Series, namely ‘Origin.’ So there's been a lot of comments about finding the Luxen there, and quite a bit of threads.”

In July, an event page called “Storm Area 51 — They Can’t Stop All of Us” was created on Facebook. As of today, 2 million people have indicated they are going, while an additional 1.5 million are “interested.” The group description reads: “We will all meet up in Rural Nevada and coordinate our parties. If we naruto run, we can move faster than their bullets. Lets see them aliens.”

Located in Nevada, “Area 51,” a high-security military facility, has fascinated alien hunters for decades; many believe it houses the bodies of extraterrestrials or wreckage from the infamous "Roswell incident" in 1947. The area surrounding the Nellis Air Force Base Complex — which houses the land on which Area 51 is located — has become a popular supernatural destination, packed with alien-themed restaurants, motels and attractions.

While the group ostensibly started as a joke, and most of the posts within the event page are satirical in nature, enough people expressed genuine interest in visiting the area that the “Storm Area 51” creator has started advertising a real-life, three-day festival called Alien Stock. It will begin on September 20, the day the “raid” was set to take place.

Eventually, the U.S. military had to issue a statement discouraging potential visitors from attempting to raid the base. Laura McAndrews is a spokesperson for the Air Force; she spoke with the Washington Post in July.

“[Area 51] is an open training range for the U.S. Air Force, and we would discourage anyone from trying to come into the area where we train American armed forces,” McAndrews said. “The U.S. Air Force always stands ready to protect America and its assets.”

In the midst of all this, media companies and retailers have attempted to capitalize on alien mania. Hulu has a new tab of recommended shows titled “Aliens!" and "Saturday Night Live" re-circulated their “Close Encounter” sketch on Twitter. Teen Vogue published a story titled “Peep These Alien-Inspired Celebrity Looks.”

According to Chris Jackson, a communications representative from the website, seeing an instant spike in search terms related to popular culture is pretty common.

“Breaking news and trends are often reflected in site searches” Jackson wrote in an email to Salon. “These don’t have to be limited to pop culture events. We also notice search fluctuations whenever there is any breaking news and/or trends relating to celebrities, politics, world events, sports, etc.”

Due to the website’s extensive library (4.79 million new videos were uploaded in 2018 alone) and the ability for the internet to reflect the collective consciousness with relative immediacy, it’s only a matter of time before users flock to another hot topic.

But for writers like Armentrout, the interest in Area 51 — and the apparent interest in aliens as potential romantic interests or sexual partners — has helped re-engage readers in their work and introduce new readers to "science fiction romance” or SFR.

SFR writer S.E. Smith said that until a few years ago, many publishers weren’t quite sure how to classify and market books like hers, which feature hot humanoid aliens and abduction subplots. Readers seemed unsure about the genre, too.

“Women expect SFR to be filled with technical terms, dry, boring, and well — just plain unsexy,” Smith told Salon. “Men expect SFR to be filled with just romance and sex; the classic romance that their moms used to read. Publishers don’t think of SFR as romance and don’t want to put the stories in with science fiction. Because they don’t know what to do with it, they tend to ignore it as being a genre to be taken serious.”

(This despite the massive popularity of romantic book series with paranormal themes, like “Twilight” and “True Blood” and their successful film and TV adaptations. Sexy vampires make sense to publishers; aliens, less so, at least for now.)

“In reality, it is none of these things,” Smith said. “Women who have started reading SFR are shocked to find strong heroines who don’t need to be rescued, but often either do the rescuing or are partners in solving the issues that arise.”

Men are surprised to find that the genre is filled with action and suspense, according to Smith, as well some of the markers that make cultural touchstones like “Star Wars” and “Star Trek” so popular — spaceships, otherworldly beings, immersive world-building.

“I’ve seen a substantial increase in the authors writing SFR in the past few years,” Smith said. “I think one of the biggest surprises I received was when I made the New York Times and USA TODAY bestseller lists and another SFR author wrote to congratulate me on breaking the glass ceiling on a genre that traditional publishers were not recognizing.”

Like in the case of romance as a collective genre, the readership of SFR skews mostly female. And not surprisingly, the aliens described in many of these series are humanoid in nature. Sometimes there is something about their appearance that is overtly “alien” (one cover I saw featured what essentially amounted to a blue-skinned Fabio), but often, like in the case of Daemon from Jennifer L. Armentrout's “Lux” series, the distinction between alien and human is more subtle; he was described as exceptionally tall and had eerie green eyes.

Of course clichés abound across all genres of writing, and stories that hew closely to tight genre forms can be particularly susceptible. But in a relatively unsaturated genre like SFR, writers can find room to originate.

“I think it's hard to say that aliens make a strong romantic lead mainly because you don't see a lot of books featuring aliens as romantic leads,” Armentrout said. “More like they make an interesting lead — something different. Readers aren't quite sure what to expect from them like they would vampires or shifters, fae or angels-slash-demons. So I think there's definitely a unique angle which can make for a great story.”

But some members of the paranormal community think that there’s something deeper stirring a collective surge in alien interest.

“I noticed the other day that one of the cable channels that is mostly ‘reality’ shows has ordered several new ‘metaphysical’ based shows, about ghosts, aliens, and the like,” Kyle Kadel, the founder of the International Paranormal Museum in Somerset, KY, told Salon. “They mentioned the increased interest comes at a time where ‘people want to be spiritual without being religious.’ I think there’s a lot of truth to that.”

Kadel said he feels like we live in a world where information overload is common; we’re constantly bombarded with experts, both legitimate and self-proclaimed, talking at us about the realities of the universe.

“So I think people are reaching for what we don’t know,” he said. “Where everything we see is so documented — the news cycles, the social media stories — I think people want to still reach out for what can’t be, or hasn’t been, documented.”

“It’s the search for something intangible, which has always been part of the human experience,” he added.

“I feel like the market for aliens  —and paranormal things in general — has been up in the last few years because people are hungry for an escape from reality,” she said. “So if it involves hunky blue aliens falling in love with Earth women, so be it.”