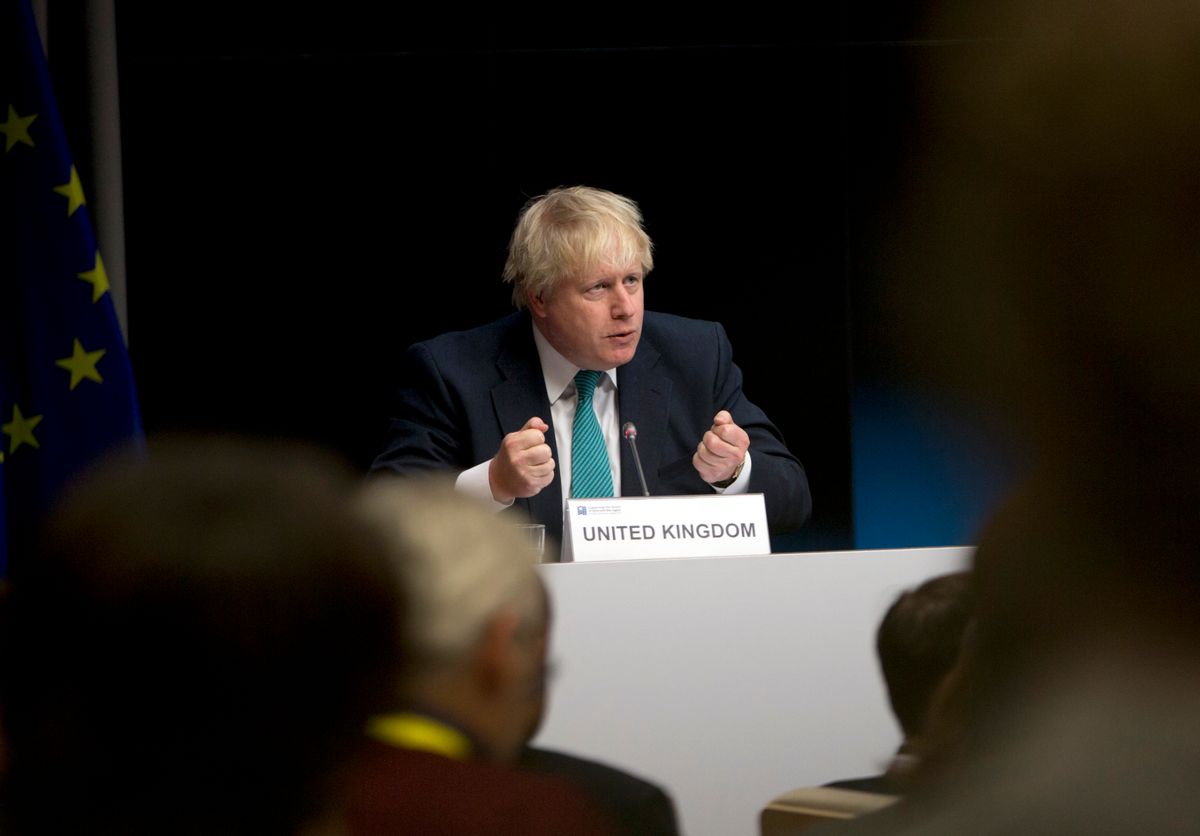 British Foreign Secretary Boris Johnson speaks during a media conference at an EU Syria conference at the Europa building in Brussels on Wednesday, April 5, 2017. The EU and other nations met Wednesday to discuss what will be needed to rebuild war-ravaged Syria. (AP Photo/Virginia Mayo) (AP)
--

MP Phillip Lee dramatically switched parties while Johnson spoke to Parliament on Tuesday, walking from the section of the room where Conservatives sit to those where Liberal Democrats sit, according to the Washington Post. Johnson threatened members of Parliament with a potential election Tuesday if they move to pass a bill forcing his government to ask European Union leaders for an extension if he is unable to strike a Brexit deal. Last week, Queen Elizabeth II granted a request from Johnson to lengthen Parliament's suspension in order to force its hand on Brexit.

In a statement explaining his decision to switch sides, Lee wrote that "the Brexit process has transformed this once great party into something more akin to a narrow faction, where an individual's 'conservatism' is measured by how recklessly one wishes to leave the European Union. Perhaps most disappointingly, it has increasingly become infected with the twin diseases of populism and English nationalism."

He added, "This is not personal — there are very many good people in the party and on the government benches. However, each of us must stand and be counted and ultimately do what we think is in our country's and constituency's best interests."

Lee described the Liberal Democrats as being the "best placed to build the unifying and inspiring political force needed to heal our divisions, unleash our talents, equip us to take the opportunities and overcome the challenges that we face as a society — and leave our country and our world in a better place for the next generations."

Former editor-in-chief of Human Events and Breitbart News London Raheem Kassam told Salon by email that "the defection of Lee and possible defections of others have been an entirely foreseeable eventuality of Johnson’s firmer stance on Brexit than his predecessor Theresa May’s. Johnson thinks, not unreasonably, that he could win a general election without the assistance of the Conservative Party’s anti-Brexit elements. This would represent a major overdue realignment within British politics, putting the historical 'wets' where they’ve always belonged: in the socialist Liberal Democrat Party."

In a statement on Tuesday, Johnson said that "as we come to that Brexit deadline, I am encouraged by the progress we are making. In the last few weeks, the chances of a deal have been rising, I believe, for three reasons: They can see that we want a deal, they can see that we have a clear vision for our future relationship with the EU (something that has not always perhaps been the case) and they can see that we are utterly determined to strengthen our position by getting ready to come out regardless, come what may. But if there is one that can hold us back in these talks, it is the sense in Brussels that MPs may find some way to cancel the referendum or that tomorrow MPs will vote with Jeremy Corbyn for yet another pointless delay."