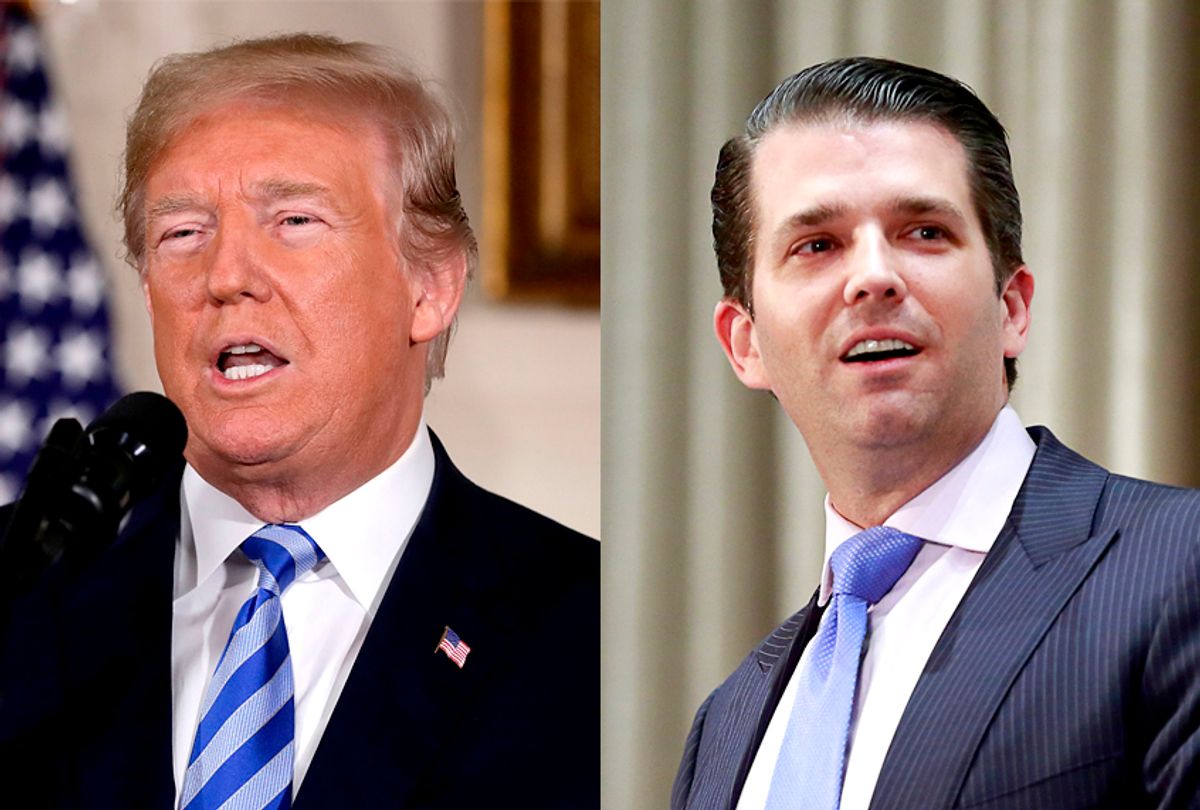 A group of President Trump’s allies led by Donald Trump Jr.’s “fixer” are trying to raise at millions of dollars to investigate journalists who cover the administration, in an apparent effort to discredit them.

As Trump spends his days attacking media outlets that publish reports he does not like as “fake news” on Twitter, a group of his allies are trying to raise at least $2 million in an attempt to target and smear reporters from The New York Times, Washington Post, CNN, MSNBC, BuzzFeed News and HuffPost ahead of the 2020 election cycle, Axios reports.

The group believes that their findings will be picked up and distributed by “friendly media outlets” like Breitbart, according to the report.

The group has sent out a pitch to prospective donors, arguing that the media outlets “routinely incorporate bias and disinformation in to their coverage.”

“We will also track the reports and editors of these organizations,” the prospectus says.

The New York Times previously reported that a “loose network” of conservatives had been compiling “dossiers” on journalists that included years-old tweets and public statements.

Though the report did not identify others involved with the effort, The Times found that a “central player” in the organization is Arthur Schwartz, whom The Daily Beast has described as Donald Trump Jr.’s “fixer.” He previously served in a similar role to former Trump strategist Steve Bannon.

Schwartz revealed his ties to the group when decade-old anti-Semitic tweets written by New York Times politics editor Tom Wright-Piersanti while he was in college were unearthed and covered by Breitbart last month.

Schwartz tweeted a link that was then reshared by Trump Jr., who posted about two dozen tweets about the story. The tweets were also amplified by Trump campaign adviser Katrina Pierson and Sen. Ted Cruz, R-Texas.

After Wright-Piersanti issued an apology, Schwartz issued a threat on Twitter.

“If the @nytimes thinks this settles the matter we can expose a few of their other bigots,” Schwartz wrote. “Lots more where this came from.”

Schwartz also highlighted years-old tweets from a CNN reporter that included an anti-gay slur after Trump sparred with the network during a news conference and a nearly decade-old tweet by a Washington Post reporter who had repeated a slur while ambiguously quoting a politician. In another instance, Schwartz tweeted a Breitbart article about a Business Insider reporter whose Instagram account contained anti-Trump comments and a photo of the reporter at an anti-Trump protest.

In July, after CNN published a report about a Trump appointee’s posts suggesting that former President Obama was a Muslim, Schwartz resurfaced anti-Semitic tweets posted by a CNN photo editor in 2011 when he was 16 years old and living in Egypt.

The editor, Mohammed Elshamy, said he was targeted by hundreds of tweets and death threats even after he apologized and resigned from the network.

“It felt like a coordinated attack,” he told The Times. “It was overwhelming.”

The Trump campaign denied any involvement with the effort.

“We know nothing about this, but it’s clear that the media has a lot of work to do to clean up its own house,” campaign spokesman Tim Murtaugh told the Times.

But Sam Nunberg, a close ally of Bannon who served as an adviser on Trump’s 2016 campaign, told the Times that the effort is a coordinated revenge campaign for coverage depicting Trump supporters as racist.

“The media has long targeted Republicans with deep dives into their social media, looking to caricature all conservatives and Trump voters as racists,” he said, adding, “two can play that game.”

“They are seeking to harass and embarrass anyone affiliated with the leading news organizations that are asking tough questions and bringing uncomfortable truths to light,” Sulzberger said. “The goal of this campaign is clearly to intimidate journalists from doing their job, which includes serving as a check on power and exposing wrongdoing when it occurs. The Times will not be intimidated or silenced.”

A CNN spokesman warned that when the government and “those working on their behalf, threaten and retaliate against reporters as a means of suppression, it’s a clear abandonment of democracy for something very dangerous.”