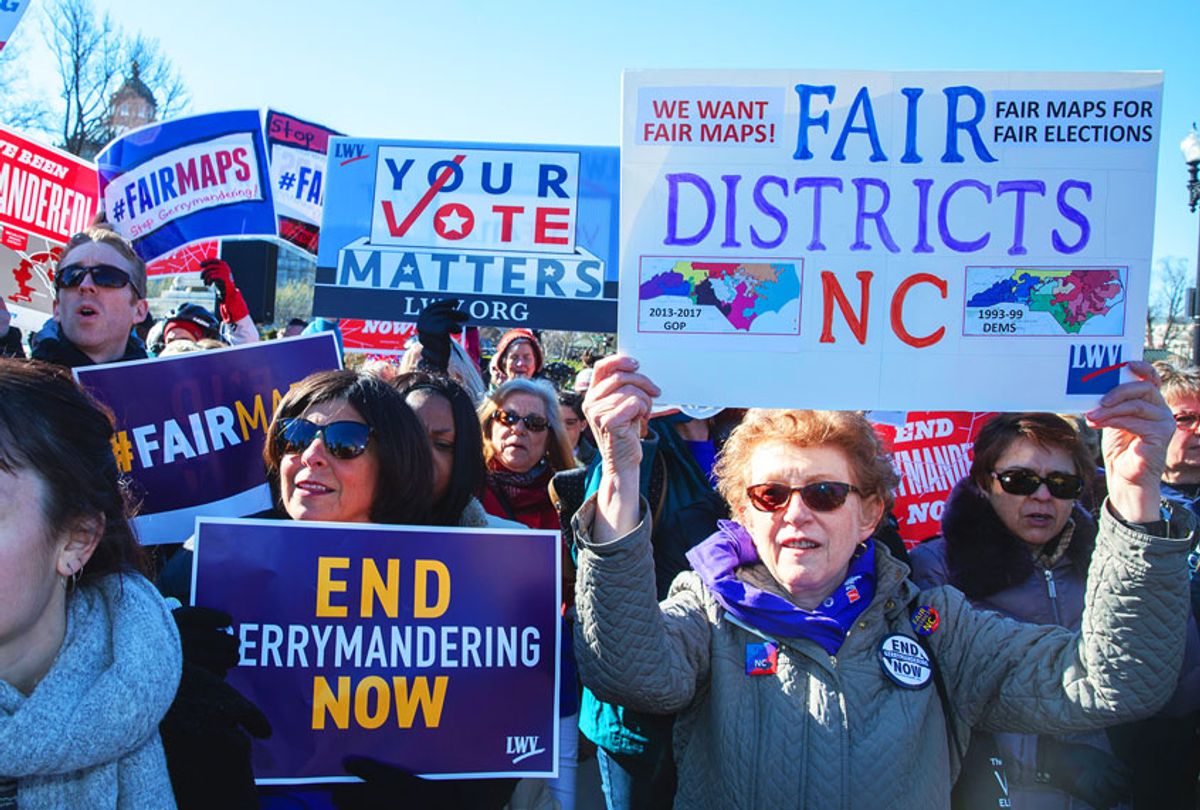 Protesters attend a rally for "Fair Maps" in Washington, DC. The rally was part of the Supreme Court hearings in landmark redistricting cases out of North Carolina and Maryland. (Getty/ Tasos Katopodis)
--

A panel of judges in North Carolina lambasted the southern state's 2017 legislative map on Tuesday as they tossed it out due to excessively partisan gerrymandering.

In their decision, Superior Court Judges Joseph N. Crosswhite, Alma L. Hinton and Paul C. Ridgeway arrived at "the inescapable conclusion that the 2017 enacted maps, as drawn, do not permit voters to freely choose their representative, but rather representatives are choosing voters based upon sophisticated partisan sorting. It is not the free will of the people that is fairly ascertained through extreme partisan gerrymandering. Rather, it is the carefully crafted will of the map drawer that predominates."

They added, "This court further concludes that the 2017 enacted maps are tainted by an unconstitutional deprivation of all citizens’ rights to equal protection of law, freedom of speech and freedom of assembly."

The judges also disputed the Republican Party's claim that the maps were not drawn with partisan considerations in mind, citing a wealth of evidence indicating that party affiliation and demographic information, which can indicate party voting choices, such as race, were crucial in determining how legislative districts were drawn in the state.

In their decision, the judges' dismissed the Republican Party's argument that it had deliberately avoided using racial data when drawing up its districts.

"Legislative defendants have claimed in this case that, even though they did not use racial data in drawing the districts, they purportedly checked the racial demographics of the districts on the 'back end' to ensure that 'the VRA was satisfied,'" the judges wrote. "Legislative defendants presented no testimony at trial to substantiate this assertion, and the court finds the assertion not credible for multiple reasons."

The judges further ordered that the maps be redrawn by no later than Sept. 18, 2019, two weeks from the date of the order being given. To prevent further partisan chicanery, they also laid out strict provisions detailing how the new redrawing process would be made transparent to the public.

"The court will require legislative defendants and their agents to conduct the entire remedial process in full public view," the judges wrote. "At a minimum, that would require all map drawing to occur at public hearings, with any relevant computer screen visible to legislators and public observers. Given what transpired in 2017, the court will prohibit legislative defendants and their agents from undertaking any steps to draw or revise the new districts outside of public view."

Salon's Igor Derysh reported on the North Carolina Republican Party's dishonesty in how it presented its legislative redrawing initiative back in June.

"[Advocacy group Common Cause] said that files found on longtime GOP gerrymandering architect Thomas Hofeller’s hard drive after his death last year show that the North Carolina Republican Party misled a federal court into extending the deadline for revising the state's legislative districts, which had been ruled an unconstitutional racial gerrymander," Derysh wrote. "Hofeller, who was paid millions by the Republican National Committee, left behind a trove of hard drives and flash drives detailing his work for the party. His estranged daughter discovered the files and turned them over to advocacy groups challenging the Republican policies in court."