"Fox & Friends" host Brian Kilmeade: Trump "never should have said" Mexico would "pay for the wall"

Kilmeade's remarks came a day after the Pentagon said it would divert $3.6 billion in funds to pay for Trump's wall 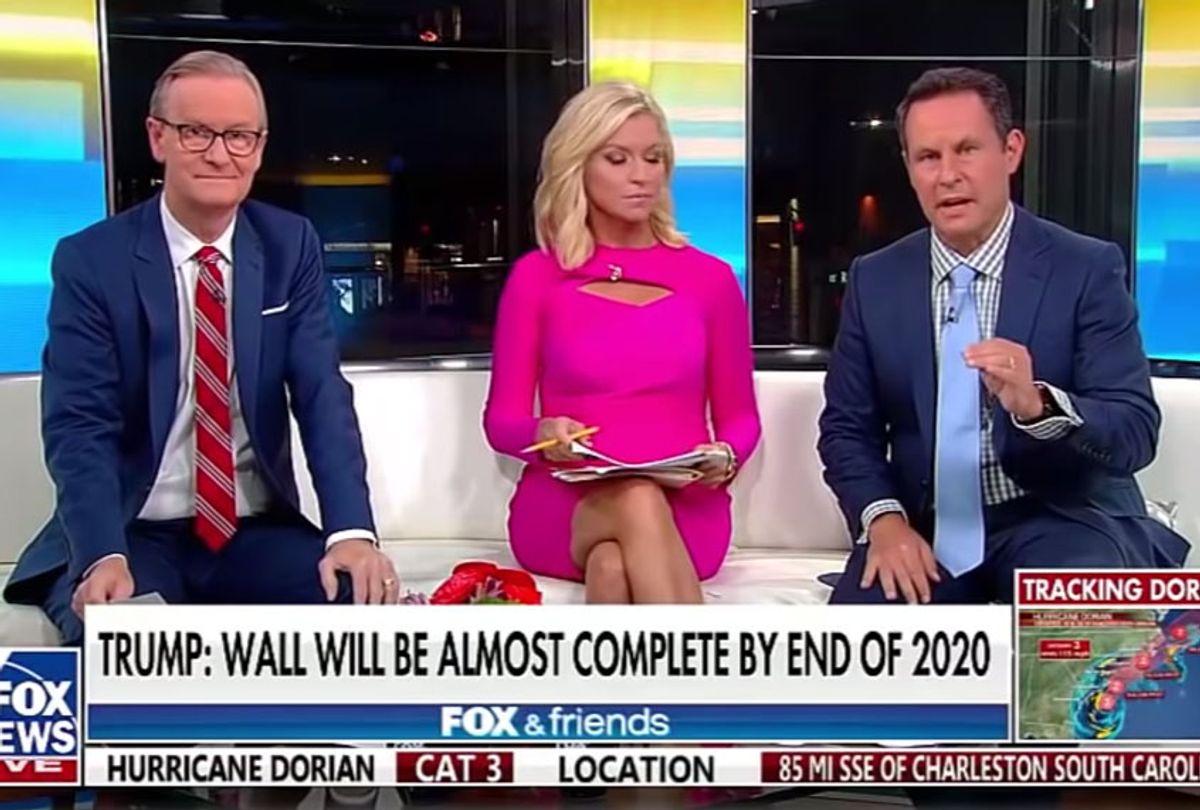 Brian Kilmeade, one of the three co-hosts of "Fox & Friends," declared Thursday that President Donald Trump was wrong to promise his supporters that Mexico would pay for a wall along the nation's southern border.

"The president never should have said Mexico is going to pay for the wall, though he says he's going to get it in fees at border crossings," Kilmeade said, after displaying a headline from the Daily Beast that read: "Trump Raids Elementary Schools to Pay for the Wall: Mexico Off Hook."

Kilmeade's remarks came one day after the Department of Defense announced it would divert $3.6 billion in military construction funds to foot the bill for Trump's wall, a tab which he vowed Mexico would pick up. In total, 127 domestic and overseas projects will be put on hold. The impacted projects include: an elementary school in Germany; a cyberoperations center in Virginia; and a list of installations in Puerto Rico, which is still reeling from the wreckage brought by Hurricane Maria in 2017.

Senate Minority Leader Chuck Schumer, D-N.Y., decried the move as a "slap in the face" of the U.S. armed forces.

"It's amazing — the people that could not care less as President Obama's administration starved the military year after year and watched it rot away," Kilmeade said on "Fox & Friends" Thursday morning. "So the president for the last three years, as General Mattis said, he got 80 percent of his requests approved. They will be rebuilding."

"They're taking a small percentage in reprogramming and delaying projects — not canceling them," the Fox News host continued. "But it didn't stop the sensationalist headlines. Most certainly people are concerned about military projects."

Kilmeade then displayed the headline from the Daily Beast alongside others from NBC News and the Washington Post, before stating: "The president never should have said Mexico is going to pay for the wall."

Offering his own two cents, co-host Steve Doocy chimed in: "I think he did think initially that he would find a way for Mexico to pay for it but as we know, that did not work."

Kilmeade's remarks come as the once cozy and symbiotic relationship between Fox News and the Oval Office appears to be on shaky grounds, with the president recently escalating his attacks against the right-leaning channel

Last month, several Fox News contributors publicly rebuked the president in response to his public criticisms of their network. Their remarks came after Trump lashed out at Fox News anchor Sandra Smith for bringing on the Democratic National Committee's communications director Xochitl Hinojosa on air to discuss next month's third Democratic primary debate.

"Just watched @FoxNews heavily promoting the Democrats through their DNC Communications Director, spewing out whatever she wanted with zero pushback by anchor, @SandraSmithFox," Trump tweeted at the time. "Terrible considering that Fox couldn't even land a debate, the Dems give them NOTHING! @CNN & @MSNBC are all in for the Open Border Socialists (or beyond)."

In addition to blasting the "America Newsroom" co-anchor, Trump assailed several other Fox News stars for refusing to promote his agenda on air.

"Fox hires 'give Hillary the questions' @donnabrazile, Juan Williams and low ratings Shep Smith. HOPELESS & CLUELESS! They should go all the way LEFT and I will still find a way to Win - That's what I do, Win," he wrote. "Too Bad!"

The president wrapped up his social media outburst by complaining that Fox News was "letting millions of GREAT people down" and that he needs to "start looking for a new News Outlet," since Fox News "isn't working for us anymore!"

It appears the president still approves of Kilmeade, however. During an appearance last week on Kilmeade's radio show, Trump heaped praise on the Fox News host, saying he was "getting much better."