Trump wants you to pay more for light bulbs and power — but at least you'll own the libs!

Trump rolled back a regulation that would make light bulbs cheaper and last longer. For liberal tears, basically 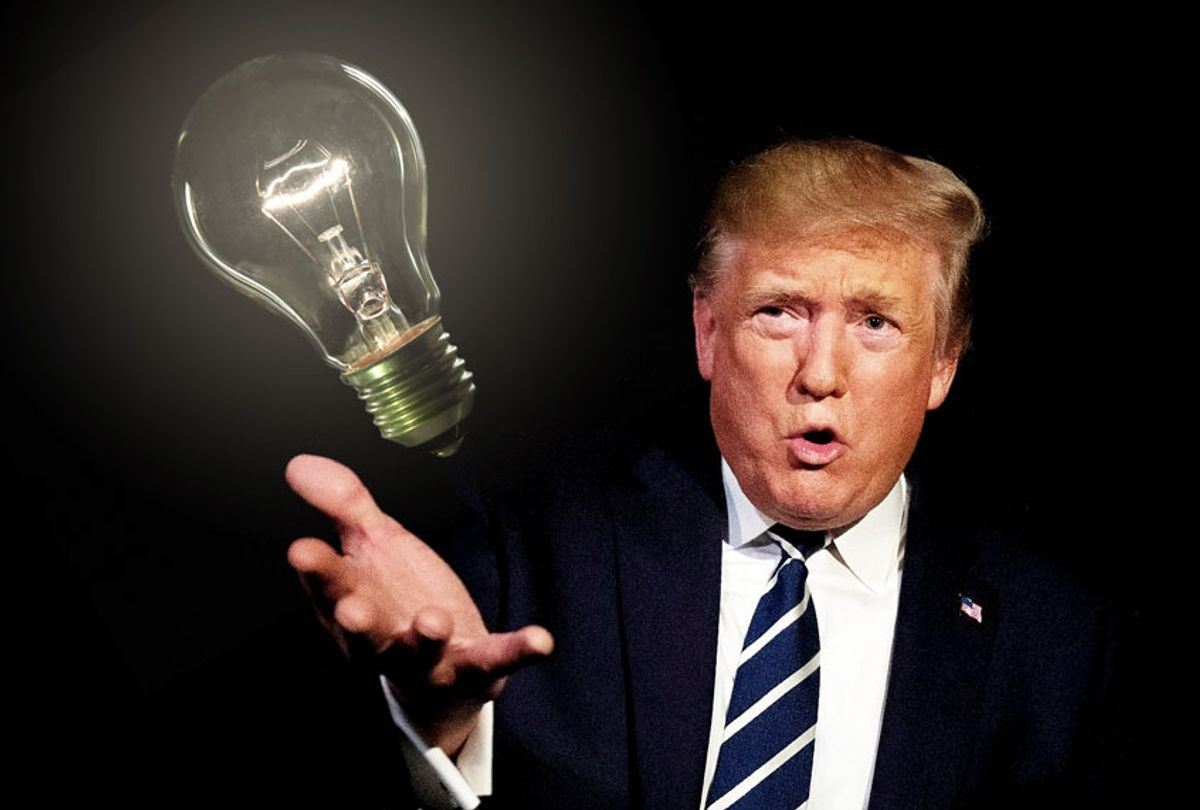 Rep. Steve King, the Iowa Republican who is easily the most racist member of Congress, admitted on Wednesday he had drunk toilet water. That marks a new low in conservative self-owning while trying to own the liberals. But in the annals of irrational liberal-hating on that day alone, it was far from the most consequential. No, that honor likely goes to the Trump administration's rollback of a regulation from the the George W. Bush era that requires light bulbs to meet energy efficiency standards.

What is remarkable about this move is how much Trump is screwing over his own voters — well, and all other American consumers — by doing this. As the New York Times reports, switching to energy-efficient light bulbs is flat-out better for consumers on every metric. The better bulbs cost less to run, saving consumers $50-$100 in electricity bills over the bulb's lifetime. They are also sturdier, meaning that people have to spend less of their lives teetering on ladders changing bulbs. Those savings add up to a national $12 billion a year for the country.

Indeed, there's only one class of people who benefit from not switching to energy-efficient light bulbs: Manufacturers, who want consumers to burn out their bulbs more often so they have to keep buying them.

There's no doubt that Trump secretly holds his own voters in contempt, and probably gets a kick out of screwing them over. But as asinine as this is, right-wing media has successfully convinced the conservative base that paying more money for crappier light bulbs is a good thing. Why? Because it's likely to upset liberals, and upsetting liberals is the main, and perhaps only, purpose of the modern-day conservative movement.

But the purpose of such campaigns is not to actually confuse right-wing audiences. It's because the real reason for hating energy-efficient light bulbs — resentment of liberal "elites" — is hard to defend outright. So outlets like Fox News provide glib and demonstrably false talking points about light-bulb aesthetics so their viewers can defend their dumb views without admitting their true motivations.

(Admittedly, providing transparently dumb talking points that Fox News viewers can use to slowly drive their children and grandchildren mad is a major function of the network.)

It's a little strange, of course, that conservative media has focused so much energy on training its audiences to hate a regulation written during the Bush administration, which was no ally to the environmental movement but was at least not actively hostile to letting consumers save a little money on light bulbs. Really, the fact that light bulbs became such a flashpoint appears to be mostly an accident of timing.

While the regulation was written under Bush, it was finalized and implemented during the Obama administration. Therefore, it became a useful propaganda weapon by right-wing media intent on framing everything about Obama as a radical threat to the American way of life.

The very mundanity of the light bulb issue is another reason why it got so much traction in the world of right wing grievance-mongering. Even the most devoted liberal-hater has a hard time getting worked up about whether your electricity comes from a coal-powered plant or a wind farm. But light bulbs are an everyday consumer product, which allowed those looking for reasons to hate the liberals to claiming that their sacred right of "freedom" — when it comes to what bulb they put in the kitchen fixture — was being stripped from them by that nefarious dictator, Barack Hussein Obama.

This, of course, is a very silly hill to die on. When most people thinking of consumer products that help them express their individuality, light bulbs tend not to rank very high. Indeed, light bulb choices are already limited, because most people just want light bulbs that fit into their existing sockets and appliances, and have no interest in spending hours making sure they have the right size and model. On the handful of metrics people do care about — light color, brightness — the energy-efficient models provide the same level of consumer choice.

But the idea that nefarious Democrats are taking your "choices" away is too exciting for mere reality to infringe upon it. Sure enough, this silly idea has managed to take hold among the more low-wattage members of the supposedly liberal media.

During Wednesday's multi-hour Democratic climate change forum, for instance, CNN inflicted Chris Cuomo on Sen. Elizabeth Warren D-Mass., and sure enough, he parroted this right-wing talking point in all its dippy glory: "So do you think that the government should be in the business of telling you what kind of light bulb you can have?"

Warren treated this question with the respect it  deserves, rolling her eyes at the crowd when she saw where he was going and exclaiming, "Oh come on, give me a break."

Warren went on to argue that the entire light bulb debate was ginned up by a fossil fuel industry that wants "to stir up a lot of controversy around your light bulbs, around your straws and around your cheeseburgers," instead of talking about how "70 percent of the pollution, of the carbon that we’re throwing into the air, comes from three industries."

All that is true, of course, but in a sense it doesn't go far enough in capturing the sleaziness of this strategy, or the reason right-wing media is all het up about BulbGate. Much of this is about using culture-war issues to train conservative voters into embracing an attitude of moral depravity towards younger generations, in other words to spread the belief that no convenience is too minor or inconsequential not to take priority over literally saving the planet.

"One of them is the candle-shaped ones, and those are a favorite for a lot of people," Cuomo said during his question. Baked into that barely comprehensible statement is the assumption that having exactly the light bulb shape one desires matters more than leaving one's kids a livable world.

Contempt and cruelty are habits of the mind  that require routine maintenance. Without it, they inevitably start to erode under the natural human impulse towards empathy. Practice hate and moral indifference on this light bulb issue, and the conservative mind can harden itself putting children in cages. Anything and everything can be justified, so long as it's about owning the liberals.