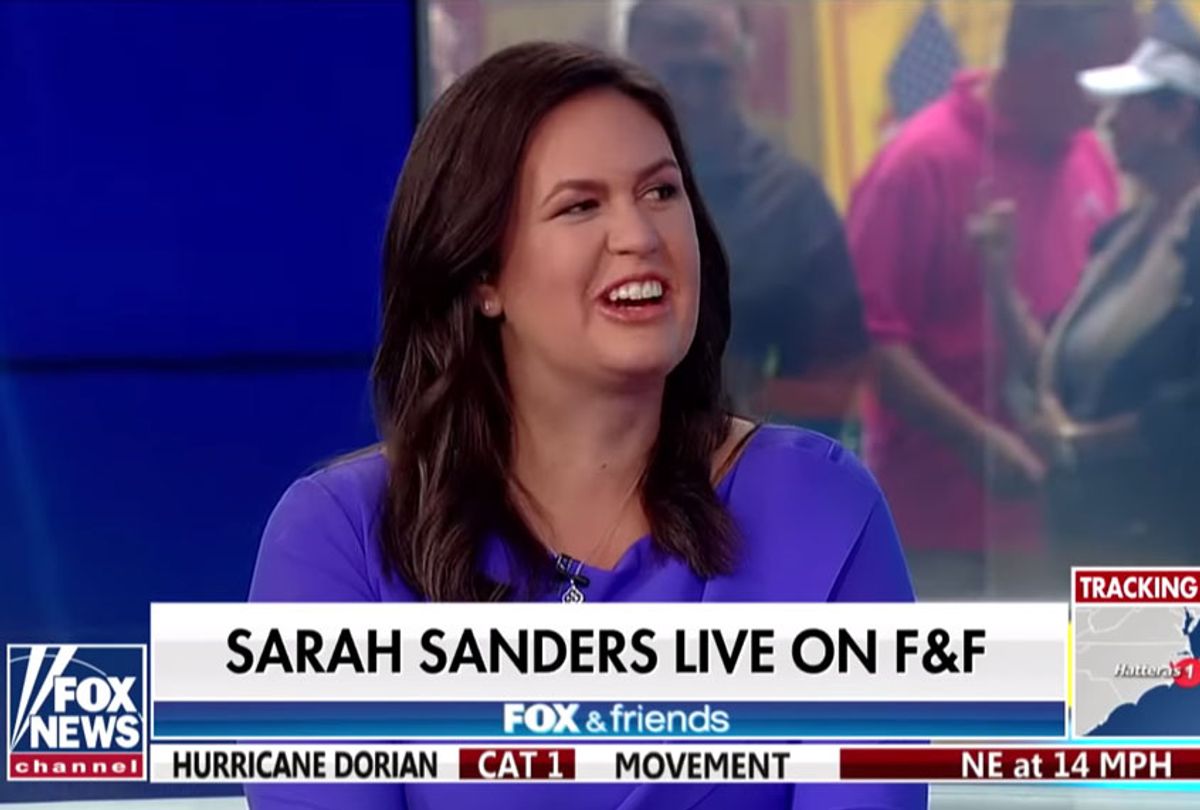 While she perhaps appeared to some to have stepped back into her former job as White House press secretary, Sarah Huckabee Sanders in fact made her debut Friday in her new role as a Fox News contributor.

During an interview on the network's morning show, "Fox & Friends," Sanders spoke warmly about the "tremendous experience" she had working at 1600 Pennsylvania Ave. — one which she would "honor and treasure forever."

Sanders made it clear from the start that she would continue to serve as a fierce and loyal defender of the president in her new role at his choice news network, first by attempting to spin a new jobs report that fell short of expectations as a sign that the president's agenda was working.

"I think — at the end of the day, there is no question that the president and his administration have turned the country around," she said. "We're doing better under this president than we have in the previous eight years."

After being asked about the policies outlined by some presidential hopefuls earlier this week at a CNN town hall on climate change, Sanders took aim at several Democrats vying to take on Trump in the upcoming 2020 election.

"The things that are coming out of Democrats' mouths these days — I can't even process it. They're so stupid," the former press secretary said. "Any American that is listening to the things that the Democrats are saying and still supports them — you have to ask them, 'Why?'"

"Fox & Friends" co-host Steve Doocy then asked Sanders if she continued to be subjected to public scrutiny over her role in the administration, recalling the time when a restaurant in Virginia infamously refused to serve her.

"It's a hit or miss," Sanders said, noting that it is often women who approach her in public to voice their disapproval with her support for the president.

"I am only the third woman and the first mom to ever be the White house press secretary, and yet women attack me relentlessly instead of being proud that we have more women doing those types of jobs," she said. "They still see me as somebody who is a very pro-Trump supporter. I'm not going to change my position."

"It would be very odd to go from doing what I was doing to all of a sudden doing something different," she continued. "I loved my experience. I loved working for the president. I think he has been able to do some tremendous things for the country, and I look forward to watching him do it for six more years."

Trump, who has spoken favorably of Sanders since her departure from his administration and even urged his former staffer to follow in her father's footsteps by mounting a gubernatorial campaign in Arkansas, promoted his former press secretary's Fox News appearance in a tweet late Thursday.

After the segment featuring Sanders ended, Trump applauded her performance by writing, "Great interview of Sarah Sanders by @foxandfriends. She is a terrific person with a great future!"

The former press secretary's unwavering support of Trump stands in sharp contrast with assessments made by other ex-administration officials, who have spoken out against the president since leaving the White House.

Anthony Scaramucci, the short-lived White House communications director who vaulted Sanders into her post in the administration, has come out swinging against his former boss in recent weeks. Scaramucci has alleged that Trump has gone "off the rails" and accused him of using "increasingly divisive rhetoric," which he claims has damaged the "fabric of our society."

Even former Defense Secretary James Mattis, the former Marine Corps general who said he did not find it appropriate to publicly voice his opinions about the president, has hinted at disagreements with Trump on foreign policy in recent interviews for his book tour.

But Sanders appears poised to remain one of Trump's most loyal mouthpieces. She launched a polished campaign-style personal website last month and also announced Thursday that she plans to pen a memoir about her time in the White House.

Unlike less flattering accounts written by former administration officials, including Omarosa Manigault Newman and Cliff Sims, Sanders previewed Friday that her book, slated for publication in the fall of 2020, would fondly recall her turn on the podium before her resignation as press secretary in June.

"My experience was extremely positive," she said. "My book will be positive."

You can watch Sanders full appearance on "Fox & Friends" here: