At a recent town hall, Ernst said Congress needs to "sit down behind closed doors" to "address Social Security" 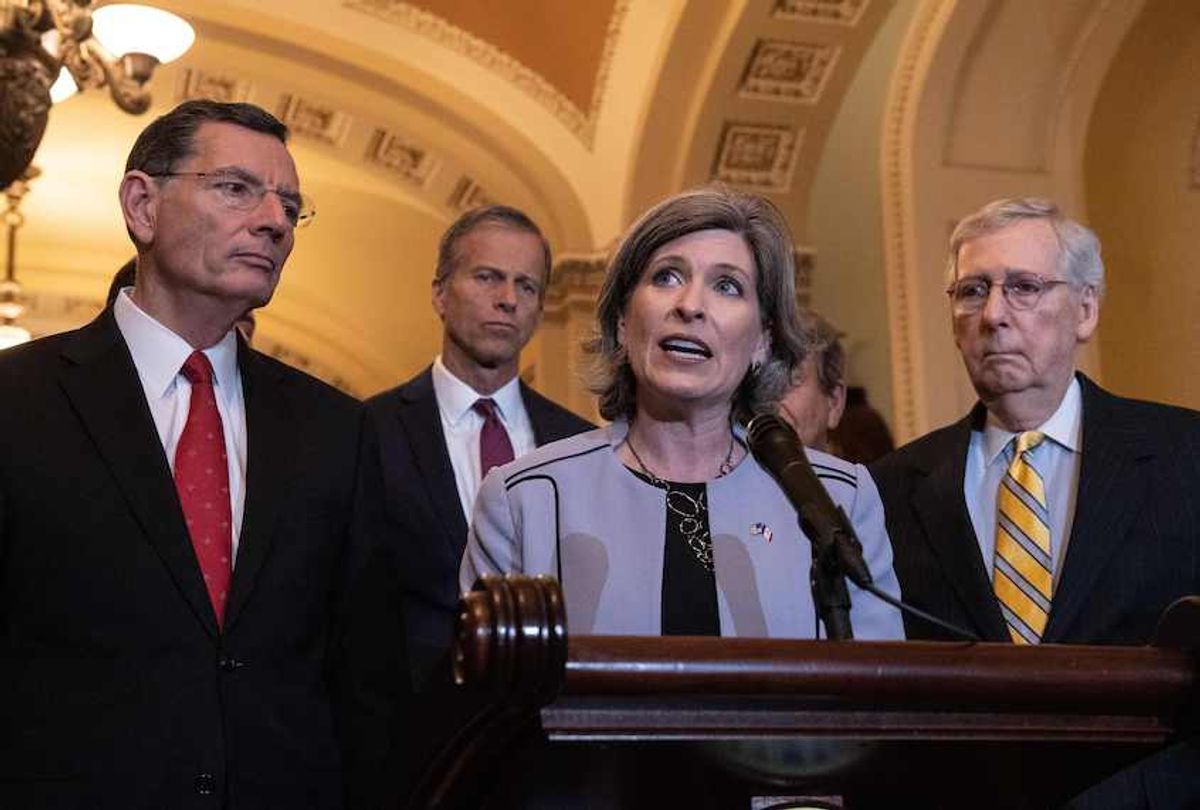 U.S. Republican Senator from Iowa Joni Ernst speaks to the press after the Republican weekly policy lunch at the Capitol in Washington, DC on May 14, 2019. (Nicholas Kamm/AFP/Getty Images)
--

Senator Joni Ernst (R-IA) just said out loud what Republican politicians usually only talk about in secret meetings with their billionaire donors: The GOP wants to cut our earned Social Security benefits — and they want to do it behind closed doors so that they don’t have to pay the political price.

At a recent town hall, Ernst stated that Congress needs to “sit down behind closed doors” to “address Social Security.” She vaguely asserted, “A lot of changes need to be made in this system going forward.” But, she complained, if these changes were proposed in public, she would be accused of pushing “granny over a cliff.” It is not hard to figure out what “changes” she has in mind.

There are many “changes” that should be made to strengthen Social Security and make it even better than it already is. But none of those have to be done secretly.

Congress should enact caregiver credits for those who perform essential but unpaid labor caring for their children, aged parents, and other family members. Those crucial caregivers should receive credit toward future Social Security benefits so they don’t retire into poverty.

In addition, Congress should update the way that Social Security’s benefits are adjusted so that they reflect the high health care and prescription drug costs that beneficiaries experience. The annual cost of living adjustment is intended to keep benefits from eroding, to allow beneficiaries to tread water. But without updating the measure of inflation, those benefits are losing value each year.

Those are just some of the improvements that Congress should make. But those are not the “changes” Ernst has in mind, because none of those changes need to be done behind closed doors. Numerous pieces of legislation proposing those changes have been introduced in Congress — though none by Senator Ernst or her Republican colleagues.

No action is the same as supporting cuts. As Representative John Larson (D-CT), chairman of the House’s Social Security Subcommittee and the author of the Social Security 2100 Act, has explained, “The hard truth of the matter is that Republicans want to cut Social Security, and doing nothing achieves their goal.”

The legislation has enough votes to pass the House of Representatives. But don’t expect Majority Leader Mitch McConnell (R-KY) to bring it to a vote in the Senate. And don’t expect Senator Ernst or her other Republican colleagues to urge him to do so.

With respect to Social Security, just as with the issue of legislating background checks and other overwhelmingly popular commonsense legislation to reduce the epidemic of gun violence, Republican politicians will not say what they are for. In the case of gun legislation, they block action. In the case of Social Security, they block action unless Democrats agree to go behind closed doors so the public doesn’t know who pushed the cuts.

We should not let Republican politicians get by with platitudes about “saving” and “fixing” Social Security. And we certainly shouldn’t let them hide behind closed doors and undermine our Social Security.

The only group that disagrees is Republican Party donors. As an ideological matter, they hate Social Security because it puts the lie to their assertions that government can’t work. They do not want to pay their fair share. Indeed, they would love to get their hands on the money now flowing to Social Security.

When President George W. Bush proposed destroying Social Security by privatizing it, the American people overwhelmingly rejected his plan. But Republican politicians learned the wrong lesson. As unpopular as Bush’s proposal was, he was at least willing to advocate for it publicly. Rather than recognize the proposal was the problem, Ernst and her fellow Republicans think the problem was being honest with the American people.

All of us who have a stake in Social Security — which is every one of us — should insist that those seeking our vote tell us if they support expanding or cutting Social Security. If they refuse to tell us, if they ramble on about their desire to “save” or “fix” or “strengthen” Social Security in secret, we should draw the obvious inference: They want to cut Social Security. We should use the election to ensure they do not have the power to do that — and certainly not behind closed doors.