The gun lobby's most pernicious myth: There is no "good guy with a gun"

The NRA's favorite fantasy is nothing short of a shameless lie: Guns will not save the day — they will kill us 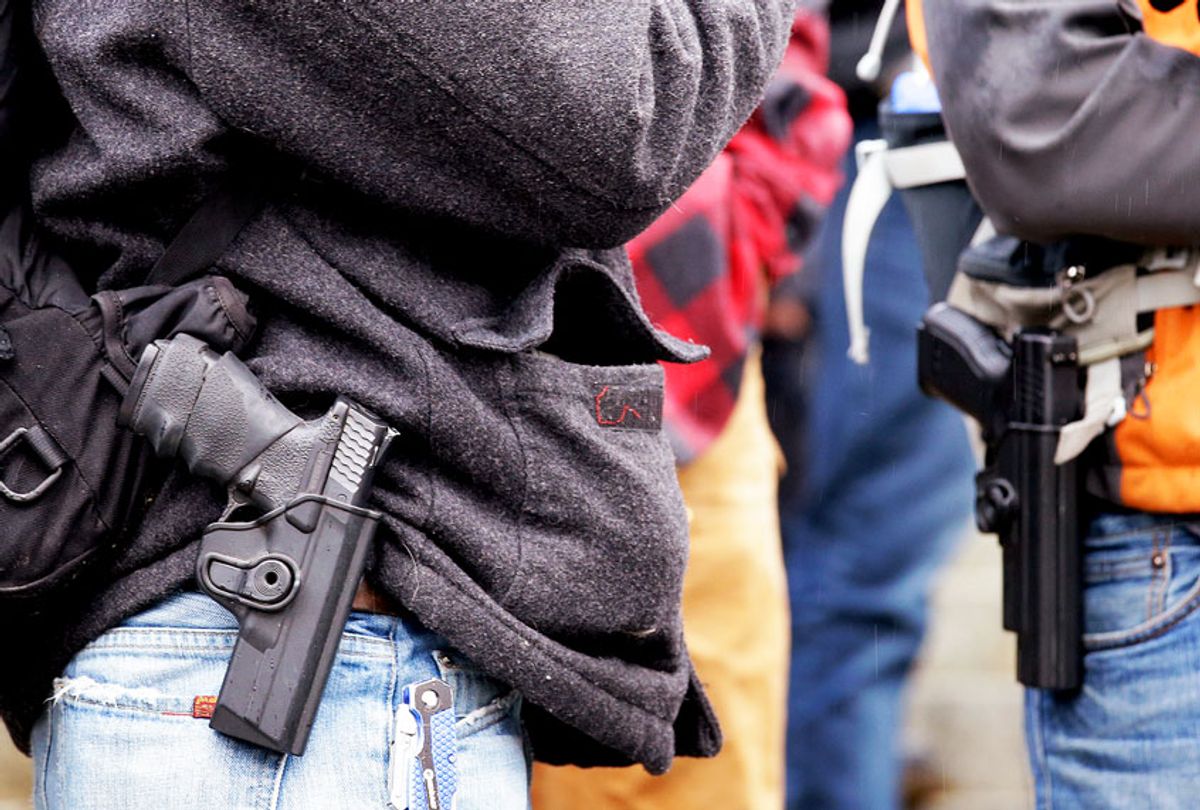 Men stand with pistols strapped at their sides at a gun rights rally on the steps of the Capitol Friday, Jan. 15, 2016, in Olympia, Wash. (AP Photo/Elaine Thompson)
--

What we do have is more guns than people.

A recent report published by the Small Arms Survey in Geneva, Switzerland, found that there are more than 393 million firearms owned by civilians in this country. We have a population of 326 million. That means there are 120.5 firearms for every 100 American citizens, according to the Washington Post. It’s a fact. If every single person in the United States possessed a gun, including babies, elderly people and the infirm — even including those hospitalized and on their deathbeds — there would still be 67 million guns left over. Sixty-seven million.

The number of guns owned by civilians is an outrage, a profanity, a sign that this country has lost its collective mind. But not to the National Rifle Association it isn’t. Not to the Gun Owners of America, another major gun lobby organization with over two million members, which is frequently critical of the NRA for being too soft on gun rights. These well-funded lobbies for gun manufacturers and gun owners have long taken the position that what we need is more guns, not less. They say that more guns equal less crime, despite FBI statistics that show conclusively that violent crime, and especially crimes involving firearms, is higher per capita in areas of the country with more guns.

You need guns to defend yourself and your property, these groups tell us. If more people had more guns, criminals would be less likely to commit crimes because they wouldn’t know who was armed and ready to defend themselves.

“The only way to stop a bad guy with a gun is with a good guy with a gun,” said NRA chief executive Wayne LaPierre after the Sandy Hook school massacre in Connecticut that killed 20 children and six school staff. He said the same thing again after the Parkland, Florida, school massacre, which left 17 students and faculty dead. It has become the NRA’s favorite myth.

The “good guy with a gun” theory is their rationale behind arming teachers. It’s the argument they have for all the so-called “open carry” laws that have been passed. At this point, 31 states allow people to openly carry firearms in public without a license. Another 15 allow open carry with some form of state-issued license. All 50 states allow people to carry concealed firearms with varying forms of restrictions and licensing. The idea is the more “good guys with a gun,” the better.

According to ABC News, “There have been at least 19 deadly mass shootings in the U.S. so far in 2019.” There were two mass shootings last month on a single day, Aug. 3. The first, in El Paso, Texas, was at a Walmart. Twenty-two people were killed and 24 were wounded. That night in Dayton, Ohio, 10 people were killed and another 17 were wounded in a shooting that happened in less than 30 seconds. On Aug. 31, a shooter in Odessa, Texas, killed seven people and wounded 25, including three police officers.

Not one of the 19 mass shootings this year was stopped by a “good guy with a gun,” an armed civilian. Police shot the “bad guys with a gun” in Dayton and Odessa. In Dayton, it took them 66 shots to bring down the killer. They fired 40 rounds of .45 caliber ammunition, 16 rounds of .233 caliber ammunition, and one shotgun round. The killer took only 40 rounds to kill seven and wound 17 with his AR-15 style weapon. The alleged shooter in El Paso somehow evaded dozens of responding police officers before surrendering.

Both Texas and Ohio allow open carry of firearms without a license, and yet in neither place was there a civilian “good guy with a gun” to stop the carnage in the midst of panic and chaos. An armed U.S. soldier with a concealed carry license in El Paso drew his weapon before deciding to shuttle fleeing children safely out of the shopping mall.

You have probably heard most of the arguments against these open carry laws. How will cops responding to an active-shooter incident know who the shooter is, and who is just a passerby carrying a gun? What’s going to happen in a crowded store like Walmart when there finally is a shootout between a killer and “good guys with guns?” Won’t a lot of innocent bystanders be killed? If well-trained, heavily armed police can’t kill an active shooter with less than 66 bullets, how can we expect an armed teacher in a grade school to do it?

It’s madness. Every mass shooting proves how mad it is. Can you imagine what it must have been like in the El Paso Walmart, or outside the bar in Dayton, or on the street in Odessa? Guns were going off. People all around you were hit, wounded, dying, bleeding. Even if you were carrying a handgun, what would you have done?

Hide. Get behind something. Run. That’s what I would do.  That’s what people did in El Paso, Dayton and Odessa.

These mass shootings are acts of terror. People are terrorized, scared to death. They’re trying to stay alive.

In a country with more guns than people, the “good guy with a gun” myth is an obscenity. It’s a lie. Guns don’t save us. They kill us.