Can’t find green bread? Here's how to transform your kid's lunch into a monster for Halloween

This bento is packed with a side of chicken nuggets, which are so yummy that your kids will soon be asking for more 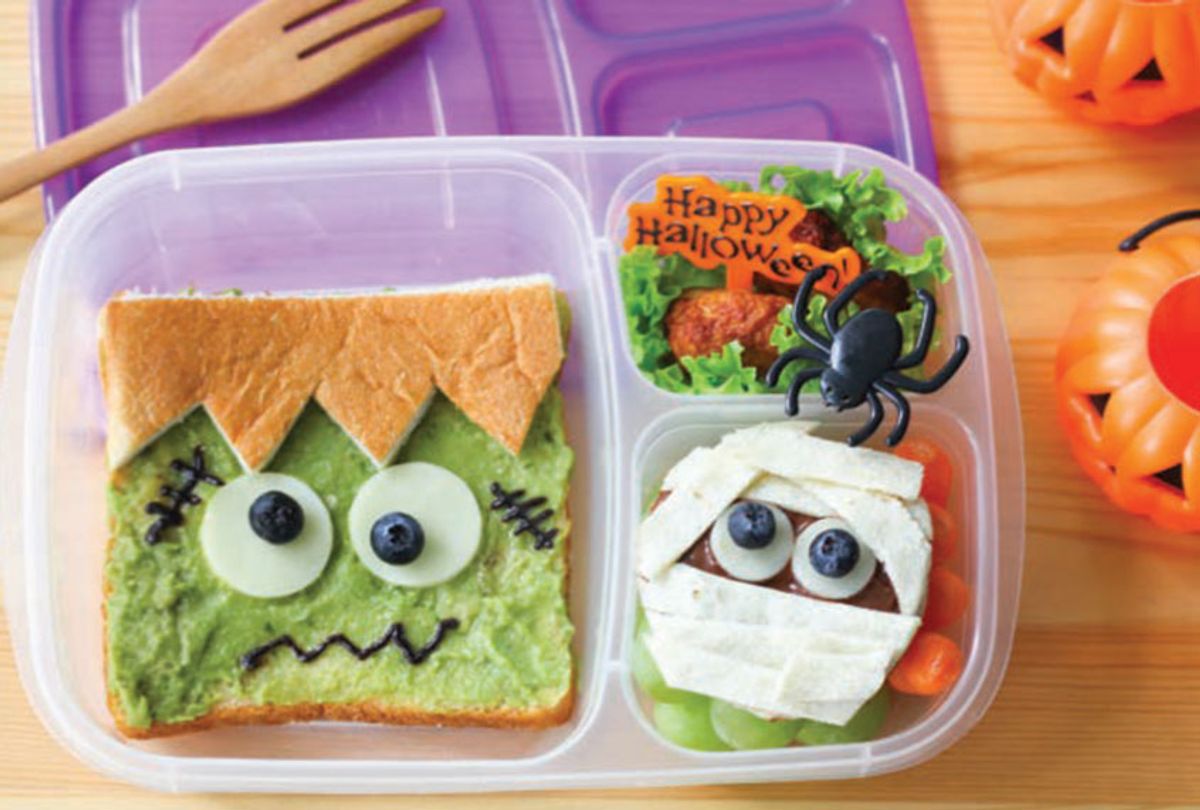 Excerpted with permission from Bento Blast!: More Than 150 Cute and Clever Bento Box Meals for Your Kids by Li Ming Lee. Copyright 2019 by Racehorse Publishing, an imprint of Skyhorse Publishing, Inc.

Li Ming Lee, a stay-at-home-mom, first began making charabens (character lunch boxes) when her firstborn had problems adjusting to elementary school. This eventually became her passion and she has since made over one thousand character boxes. Her creations have been featured in the New York Post and Huffington Post. She believes food art should taste as good as it looks, and she uses ingredients and recipes that are not only nutritious but yummy as well. She documents her creations on both her blog www.bentomonsters.com, as well as her Instagram (@bentomonsters). Here, in Bento Blast!, she shares with you more than 150 approachable and inviting recipes, complete with step-by-step pictures, so you can easily create your own food art at home.

Can’t get hold of green bread? No worries; just use a guacamole spread on your bread to turn it green and transform your sandwich into a monster that’s perfect for Halloween. Add a mummy sandwich to complete this spooky bento box. This bento is packed with a side dish of homemade chicken nuggets, which are so yummy that your kids will soon be asking for more.

1. Using a knife or a pair of scissors, cut out the monster’s jagged hair in a zigzag fashion from bread crust, or the heels of the bread in a loaf.

2. Spread guacamole on a slice of bread and place the bread crust cutout on top.

3. Cut circles from cheese using a round cutter. Add two blueberries and secure onto the sandwich using pasta sticks.

4. Fill a piping bag with Nutella or melted chocolate and use it to draw on the monster’s mouth and scar.

5. Make a round cutout in another slice of bread using a round cutter.

6. Spread on Nutella. Cut out circles from cheese using a round cutter.

7. Roll another slice of bread flat using a rolling pin.

8. Place cheese circles on the sandwich followed by two blueberries for the eyes. Secure using pasta sticks. Cut strips from the rolled out bread and place on the sandwich to make the mummy’s burial cloth. Trim off excess.