After failing to make the stage, billionaire Tom Steyer qualifies for Democratic debates in October 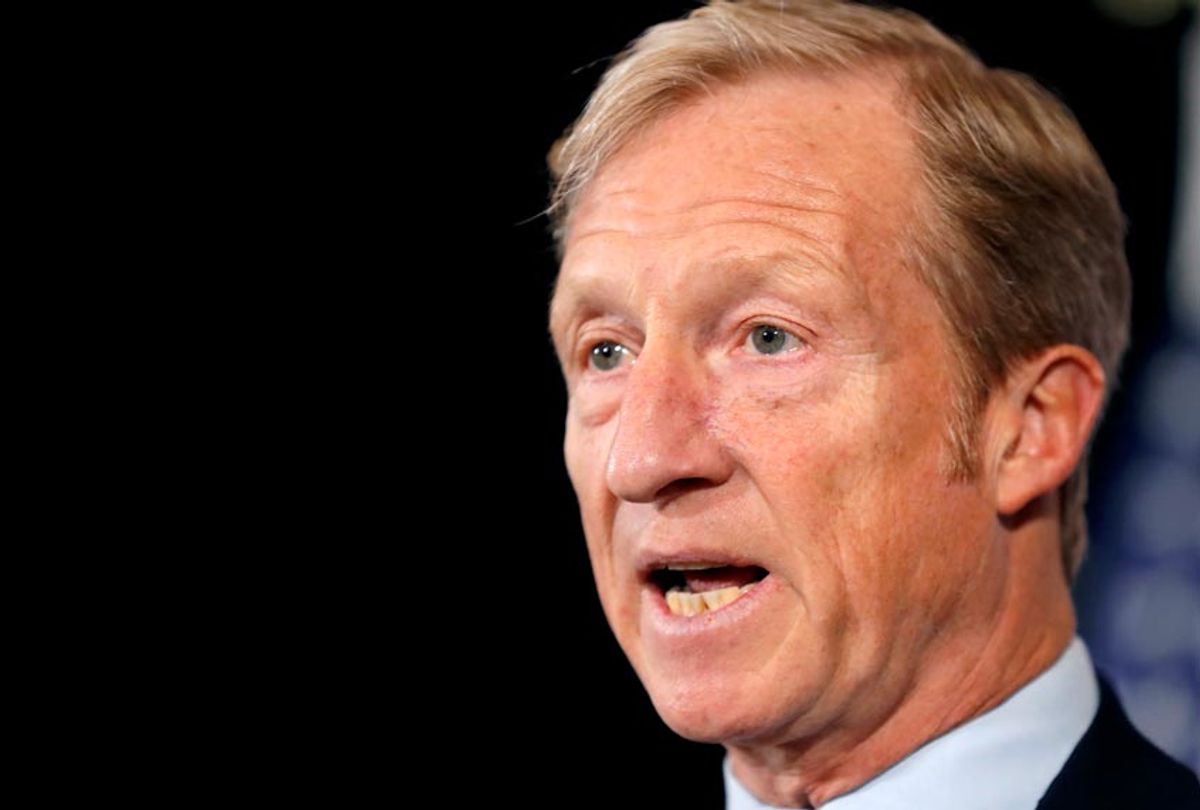 Tom Steyer, the billionaire impeachment activist and philanthropist, has qualified to participate in the upcoming Democratic presidential debates on Oct. 15.

In order to make it to the debate stage, candidates are required to earn a minimum of 2 percent support in four qualifying polls and receive financial contributions from at least 130,000 individual donors, according to the New York Times. Although Steyer fell one poll shy of qualifying for this week's debate, his ability to hit the 2 percent mark in a recent Nevada poll pushed him over the edge.

The only other candidate who will not be on stage in September but has a realistic chance of appearing in October is Rep. Tulsi Gabbard of Hawaii, who is two polls short of the threshold. If she does not make the cut, the October debates will include 11 candidates: Steyer, former Vice President Joe Biden, Sen. Elizabeth Warren of Massachusetts, Sen. Bernie Sanders of Vermont, Sen. Kamala Harris of California, Sen. Cory Booker of New Jersey, Sen. Amy Klobuchar of Minnesota, former Rep. Beto O'Rourke of Texas, South Bend Mayor Pete Buttigieg, former Secretary of Housing and Urban Development Julián Castro and entrepreneur Andrew Yang.

Salon spoke with Steyer in February, at a time when he was mobilizing supporters to impeach President Donald Trump. The billionaire explained why he felt the current president was notably worse than his Republican predecessors.

He later added, "If you allow a criminal, if you allow somebody who is lawless — who’s committed lawless acts as president, that everyone agrees has done that — and you decide that you will allow him to stay in office, you have made a decision as a country that the rules only apply to the people that you choose to apply them to, and when it’s convenient for you to apply them. That is a terrible thing for a country to decide, that in effect we no longer believe in the rule of law, the president is above the law. When it’s hard to accomplish, then we don’t do it, and in fact we don’t believe in equal justice for all. That is a terrible thing, for this society to publicly decide not to do what's right, and if you will notice, Matt, and very few people probably did notice it, two days ago, United States dropped out of the top 20 in terms of the least corrupt countries in the world. I hope you noticed that."