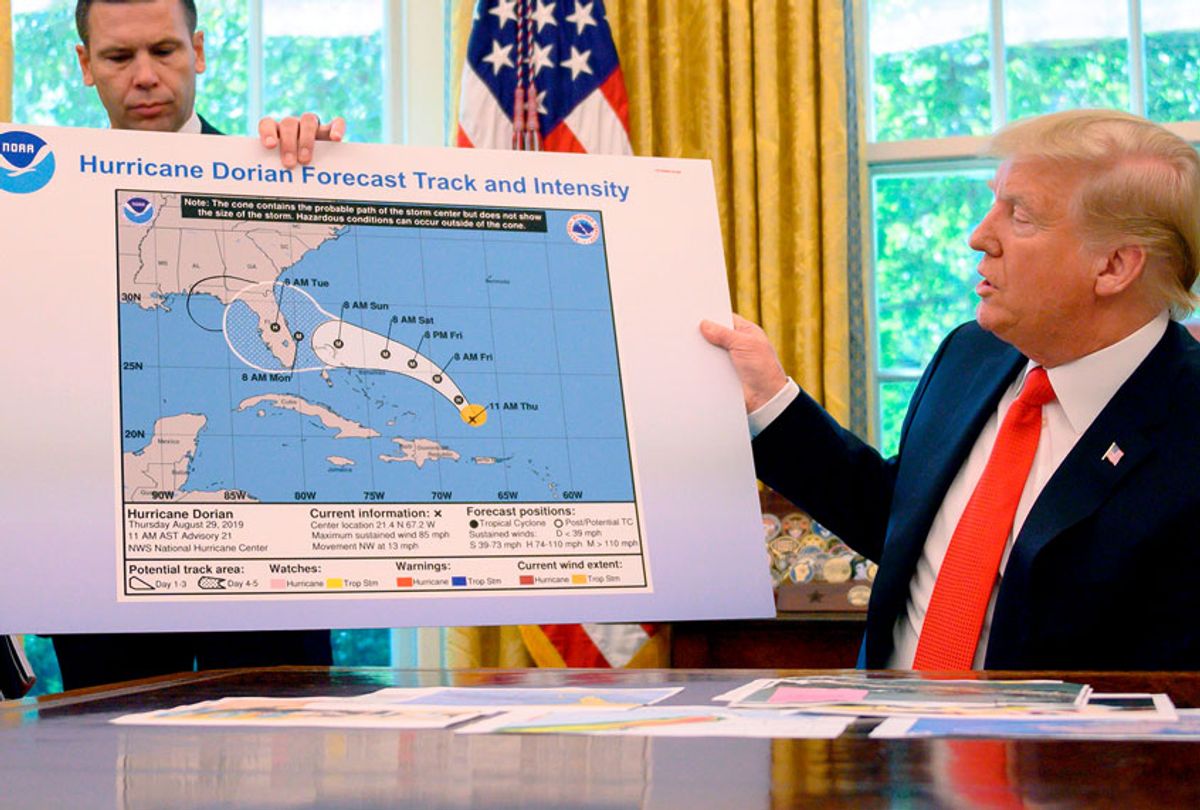 US President Donald Trump and Acting US Secretary of Homeland Security Kevin McAleenan update the media on Hurricane Dorian preparedness from the Oval Office at the White House in Washington, DC, September 4, 2019. (JIM WATSON/AFP/Getty Images)
--

The National Oceanic and Atmospheric Administration's acting chief scientist said in an email to colleagues Sunday that he was investigating whether the agency's response to President Donald Trump's inaccurate map of Hurricane Dorian's path violated NOAA's ethics and policies.

In an email to NOAA staff, obtained by the Washington Post, the agency’s acting chief scientist, Craig McLean, called its response "political" and a "danger to public health and safety."

McLean's statement comes after Trump faced mounting scrutiny for falsely claiming on Sept. 1 that Alabama "would most likely be hit (much) harder than anticipated" by Hurricane Dorian.

The president’s inaccurate claims prompted widespread confusion and outrage among the public — and within NOAA. At the time, the National Weather Service's forecast guidance showed only a very small risk — about 5 percent — to the state from tropical force winds.

Despite the backlash, Trump continued to defend his false claim throughout the week. At one point, he even displayed a map in the Oval Office, which appeared to be altered with black marker in order to show the storm's projected path extending to the southern edge of Alabama.

The NWS' Birmingham office attempted to correct the president on Sept. 1, stating that Alabama "would NOT see impacts" from the storm. However, NOAA issued an unsigned statement on Sept. 6 affirming Trump's claims and rebuking the NWS' Birmingham division for speaking in "absolute terms that were inconsistent with probabilities from the best forecast products available at the time."

That statement prompted widespread backlash from scientists, who assailed NOAA for conceding to Trump and undermining its experts during a weather emergency.

The American Meteorological Society issued a statement of support for the NWS, writing: "AMS believes the criticism of the Birmingham forecast office is unwarranted; rather they should have been commended for their quick action based on science in clearly communicating the lack of threat to the citizens of Alabama."

In his email Sunday, McLean criticized NOAA's statement, as well.

"The NWS Forecaster(s) corrected any public misunderstanding in an expert and timely way, as they should," McLean reportedly wrote. "There followed, last Friday, an unsigned news release from 'NOAA' that inappropriately and incorrectly contradicted the NWS forecaster. My understanding is that this intervention to contradict the forecaster was not based on science but on external factors including reputation and appearance, or simply put, political."

"The content of this news release is very concerning as it compromises the ability of NOAA to convey life-saving information necessary to avoid substantial and specific danger to public health and safety," he added. "If the public cannot trust our information or we debase our forecaster's warnings and products, that specific danger arises."

As a result, McLean told his staff, "I am pursuing the potential violations of our NOAA Administrative Order on Scientific Integrity."

On Monday, NWS Director Louis Uccellini reportedly received a standing ovation at a major weather industry conference in Huntsville, Ala., after he praised the forecasters who corrected Trump's inaccurate claims and upheld "the integrity of the forecasting process."

"They did what any office would do," Uccellini told the crowd of hundreds of meteorologists, the Post reported. "With an emphasis they deemed essential, they shut down what they thought were rumors. They quickly acted to reassure their partners, the media and the public — with strong language — that there was no threat."

"They did that with one thing in mind: public safety," Uccellini reportedly added. "And they responded not knowing where this information was coming from. Only later, [when] the retweets and the politically-based comments came into their office, did they learn the source of this information."

"Let me be clear: The Birmingham office did this to stop public panic," he said, and "to ensure public safety."