Not a single mile of wall has been built. And even Trump's allies are beginning to back away from the whole fiasco 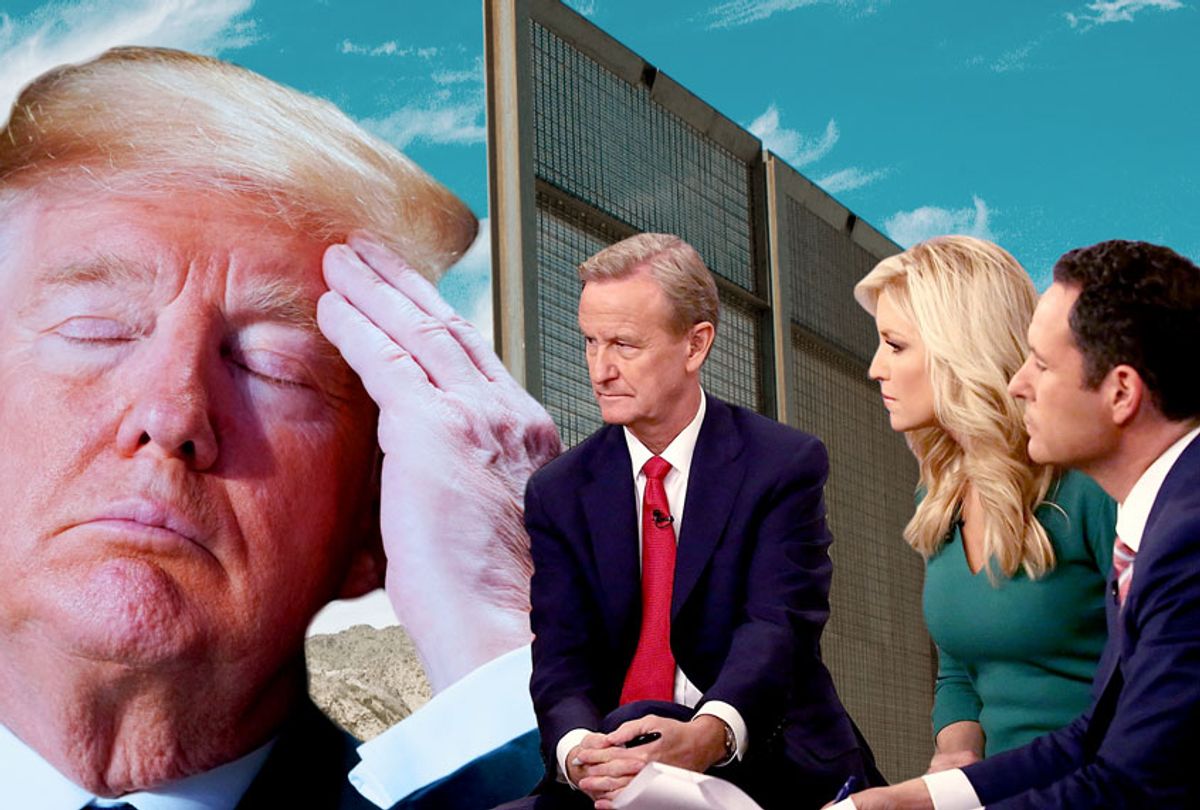 That was the ominous warning recently delivered to President Trump by Lou Dobbs, perhaps Trump’s loudest media sycophant. "His base is expecting a wall. They're expecting illegal immigration to be stopped," Dobbs explained on his Fox Business Network show. "But, my God, November 2020 is nearing at an alarming rate!"

Since his 2017 inauguration, not one new mile of Trump’s border wall has gone up.

Despite staking his entire presidential campaign on the promise that he would build a "big, beautiful wall" on the U.S.- Mexico border and would make Mexico pay for it, so far, all his administration has been able to accomplish is the replacement of about 60 miles of dilapidated, existing barriers with new fencing. While Trump’s war on immigration has seen a clampdown on legal immigration by war refugees, asylum-seekers and high-tech workers, his battle against illegal immigration has proven fruitless. His wall is officially a flop.

A solid majority of polled Americans still do not support the president’s effort to build a border wall, even as support for allowing refugees from Central America — a group Trump has repeatedly demonized as violent criminals — has ticked up among all voter groups, even Republicans and independents. Additionally, the number of people supporting more immigration has grown from 21% to a record-high of 30% since Trump took office. Again, this includes Republican voters, who have gone from 11% in favor of increasing immigration in 2016 to 16% in favor in 2019.

The widespread unpopularity of the wall, however, hasn’t deterred Trump’s quest to quench the thirst of his xenophobic base.

After the government partially shut down for 35 days due to Trump’s inability to strike a deal with Congress to fund his wall, he declared the need for his wall a national emergency in order to raid previously approved military construction projects. Democrats immediately filed suit in federal court, arguing that it’s illegal for the executive branch to spend money that Congress hasn’t appropriated. But the Supreme Court, with two new Trump-picked justices, allowed wall construction to begin while the judicial fight plays out. This week the Pentagon outlined exactly which military construction projects will be defunded so that Trump can finally begin construction on roughly 175 miles of wall, about 8% of the nearly 2,000-mile U.S.- Mexico border.

It appears that 127 military projects in 23 states, including potential 2020 battlegrounds like Arizona, Colorado, Florida, New Mexico, North Carolina, Texas and Wisconsin, have essentially been scrapped to pay for Trump’s pet project, to the tune of $3.6 billion. The defunded projects include schools for the children of military personnel and projects aimed at deterring Russian aggression in Europe. A senior defense official told CNN that of the $400 million in funding to be rerouted from Puerto Rico, “most of the projects ... were a result of Hurricane Maria.”

It’s a move that’s caused even Republicans to speak out against Trump.

“In April, Senator [Mike] Lee and I expressed our significant concerns to the Secretary of Defense regarding the potential diversion of funds for critical military construction projects in Utah,” Sen. Mitt Romney, R-Utah, said in a statement. “I’m disappointed that despite those concerns, two key military construction projects totaling $54 million will be delayed as a result of the February 2019 emergency declaration.” Both Romney and Lee voted against Trump’s border emergency in March and supported a resolution of disapproval.

“Congress has been ceding far too much powers to the executive branch for decades and it is far past time for Congress to restore the proper balance of power between the three branches,” Lee added in his own statement ,pushing for legislation that would make it harder for presidents to abuse their emergency powers in the future.

Other Republican senators have been put in the unenviable position of having to defend their votes to support Trump’s raid on military funding in the lead-up to their own tough re-election battles. Martha McSally of Arizona, Cory Gardner of Colorado and Thom Tillis of North Carolina — three of the most vulnerable GOP incumbents up for election next year — will have to explain their capitulation to the president while facing spirited and well-funded Democratic opponents.

In a statement issued on Wednesday, McSally defended Trump, saying that she “went to the mat to fight for Arizona projects” after Trump declared the emergency but that “we need to secure our border and protect our military; we can and should do both.” McSally's situation is already precarious; she was appointed to the open Senate seat left by John McCain's death after losing to Sen. Kyrsten Sinema, a Democrat, in 2018.

Senate Majority Leader Mitch McConnell said Friday he has talked to Secretary of Defense Mark Esper about protecting projects in Kentucky. But Trump looks to have already lost his base.

“The president never should have said Mexico is going to pay for the wall,” Trump sycophant Brian Kilmeade said Thursday on “Fox & Friends.” Co-host Steve Doocy chimed in, in chipper fashion: “I think he did think initially he would find a way for Mexico to pay for it, but as we know, that did not work.” No, it didn't. Nothing about this nonexistent, doomed wall is going to work for Trump or his followers.