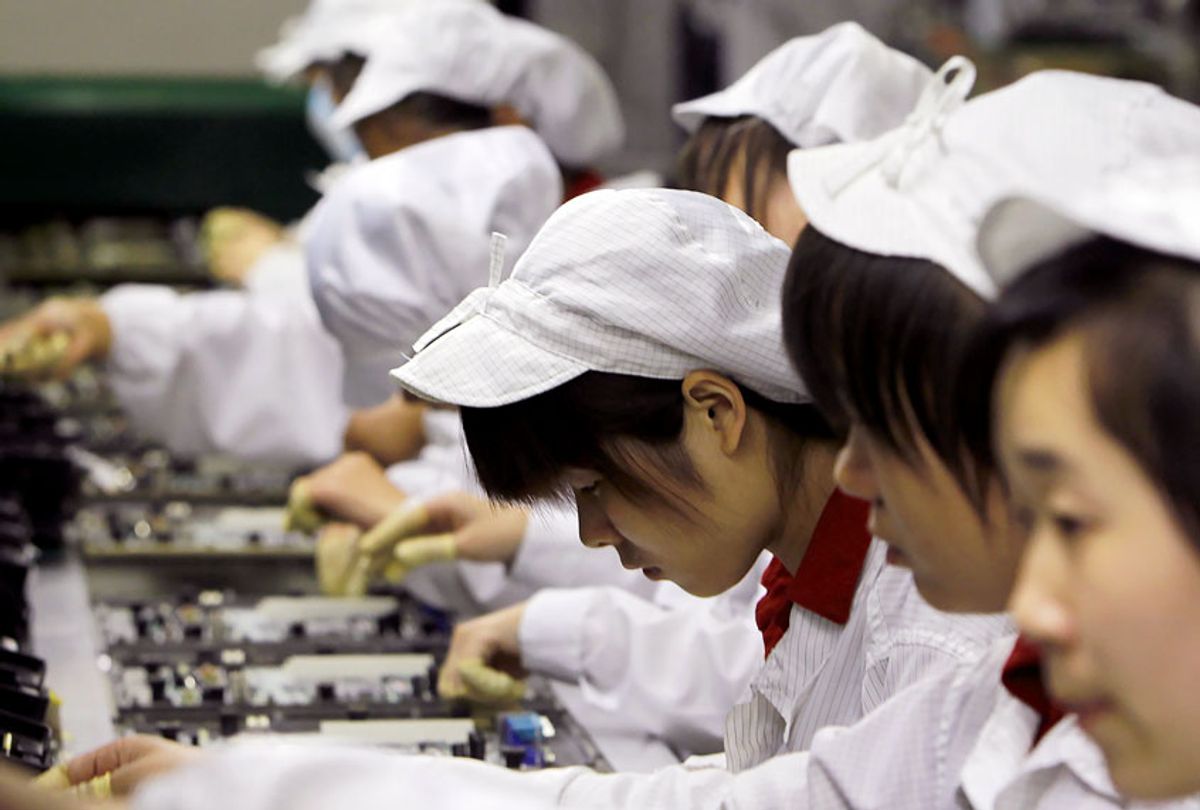 In this May 26, 2010 file photo, staff members work on the production line at the Foxconn complex in the southern Chinese city of Shenzhen, southern China. (AP Photo/Kin Cheung)
--

Apple CEO Tim Cook took the stage in Cupertino today to announce the newest entries in the company's smartphone lineup. Dubbed the iPhone 11, iPhone 11 Pro, and the iPhone 11 Pro Max, Cook called these phones the "most powerful” and “most advanced iPhones” ever built — a standard line for the annual unveiling. Yet while mainstream media outlets behaved as usual in the wake of an iPhone announcement, reporting on the new models' exciting features, a mini-scandal erupted over Apple's labor practices.

Yesterday, watchdog non-profit China Labor Watch (CLW) released a devastating report alleging that the latest iPhone 11 was "illegally produced in China” at a Foxconn factory. Foxconn, a Taiwanese electronics manufacturer with hundreds of thousands of employees, holds contracts with Apple as well as many other hardware giants, and produces much of Apple's hardware.

One broken law, according to the report, involved “dispatch workers,” temporary workers who do not not receive paid sick leave and social insurance for medical expenses. Chinese law requires that dispatch workers constitute a maximum of 10 percent of a company’s employee base; the Foxconn labor force was nearly 50 percent dispatch workers.

The report also accused the factory of paying base wages "insufficient to sustain [a] family.”

"When they are sick, they are still forced to work overtime; managers verbally abuse workers on a regular basis and sometimes punish workers by asking them to stand," CLW's report states. "Some female workers have even experienced sexual harassment while working on the production lines."

Li Qiang, executive director of China Labor Watch, said in a statement that Apple and Foxconn are aware that hiring dispatched workers is in violation of labor laws.

“Apple and Foxconn know that the issue with dispatch workers is in violation of labor laws, but because it is profitable to hire dispatch workers, they haven’t addressed the issue,” Qiang said. “They have allowed these violations to continue over the years.”

In a statement to USA Today, Apple said these workers are "being compensated appropriately,” and denied the watchdog’s claims.

"We looked into the claims by China Labor Watch, and most of the allegations are false," Apple told USA TODAY in an emailed statement. "We believe everyone in our supply chain should be treated with dignity and respect. When we find issues, we work with our suppliers to take immediate corrective action."

The report adds that there is a production quota each day. According to the report:

During the busiest time in peak season, the maximum number of phones that can be produced is 12,000. But on average, each workshop and each shift (day and night shift) produces 11,000 iPhones. In off-peak season, workers produce around 3,000 iPhones, and despite the production quota being much lower than in peak season, there are also fewer workers. As such, workers may have to work harder. If the production quota is not completed, workers will be reprimanded.

Indeed, Foxconn is notorious for overworking its employees in its Chinese factories, often forcing them to work long days in harsh work conditions — to the point where some committed suicide. According to various reports, factory workers were reported to be clocking in 12 hours a day, six days a week. In 2010, self-inflicted deaths became such a widespread problem that the workers were reportedly being asked to sign “pledges” promising not to harm themselves, and the factory installed suicide nets.

Despite the public nature of this report, it does not seem to be part of the media conversation around Apple's phones.