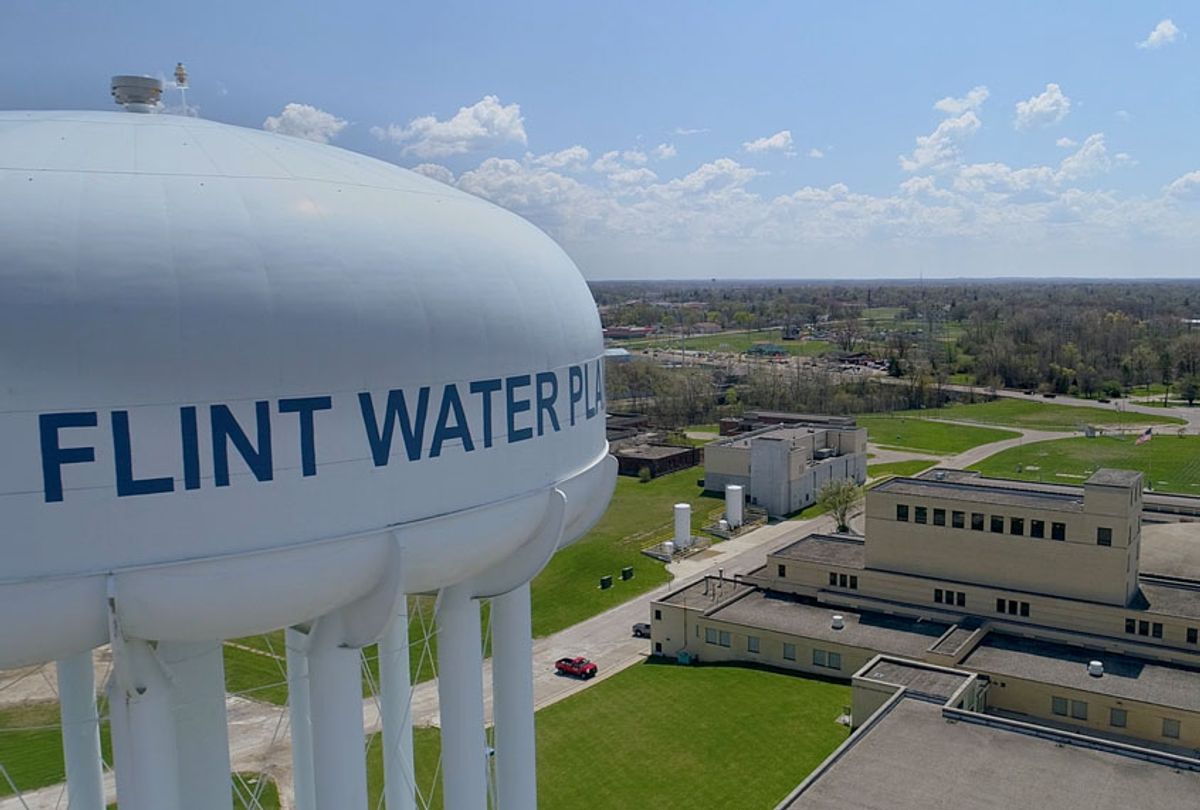 The two-year FRONTLINE investigation "Flint's Deadly Water" uncovers the extent of a deadly Legionnaires' disease outbreak during the Flint water crisis — and how officials failed to stop it. (PBS/ Frontline)
--

Watching Jassmine McBride struggle to breathe is vicariously excruciating, particularly in one scene during “Flint’s Deadly Water” showing her on a hospital gurney, writhing with discomfort. Her painful  is palpable on two levels, the physical aspect being more obvious. But this “Frontline” episode emphasizes the emotional agony of this moment by first showing McBride daring to hope for a treat most people take for granted: a simple birthday party.

The  camera captures her in the midst of a doctor’s appointment as tells her physician about her modest celebration plans. Nothing fancy, she says, simply time with family and friends to celebrate beating the odds. McBride says she was first diagnosed with Legionnaires' disease a few years prior and wasn’t expected to survive this long.

Soon after uttering those words, her inhalations grow shorter. “This is what I go through when I’m having trouble breathing,” she tells “Frontline." “I can barely talk. I can barely function. I can barely walk. It’s a scary feeling.”

She’s barely able to sit up, so they admit her to the hospital. As she lays on that gurney, all the glow of birthday dreams and wishes disappears. McBride is on the verge of turning 30.

“Frontline: Flint’s Deadly Water,” debuting Tuesday at 10 p.m. on PBS member stations and streaming online,  is the latest report on the ongoing water crisis in Flint, Michigan. The working-class city hasn’t had access to clean, safe water since 2014.

Most of the coverage of the contaminated water in Flint is related to the elevated levels of lead and other toxins sickening hundreds of residents. Meanwhile, the official count of Legionnaires' disease deaths remains at 12, with a reported 90 residents sickened by exposure to waterborne legionella bacteria during the year and a half that the city obtained its water from the Flint River.

But this devastating hour, based on two years of enterprise reporting by director Abby Ellis, reporters Kayla Ruble and Jacob Carah and senior editor Sarah Childress — all Michigan natives — posits that the death toll could be much higher.

And according to “Frontline” reports, people knew the water was contaminated before the city's supply was switched. One of the subjects featured in the hour, Tonja Petrella, tells producers that her brother Matt McFarland, a foreman at the water plant in Flint, Michigan in 2014, knew his outdated facility, which was being used to process that water, wasn’t ready to safely dispense the water.

“People are gonna die,” Petrella says McFarland, who died in 2016, told her. She adds, “I remember specifically, the day before they actually flipped the switch, he called me and he said, ‘Tonja, contact everyone that you know in Flint, anybody you care about, and tell them, do not drink the water.'"

Officially, the source of the Legionnaires' outbreak hasn’t been definitively proven, but a number of scientists have linked it to improperly treated water derived from the Flint River and used by the city in its drinking water supply.

For several months, the “Frontline” team analyzed every death record in the county during a seven-year period, searching for records of deceased residents whose recorded cause of death was pneumonia. According to scientists and medical professionals, sometimes cases of Legionnaires' can be misdiagnosed as that illness.

Carah says he began combing through every death certificate one by one. Then, when he reached the time frame of the municipal water supply’s switch, “I thought I was crazy when I was looking at it, because I kept finding more, not less.”

From May through October 2014, according to “Frontline”’s findings, 44 people died from pneumonia in Flint, up 57 percent from the 28 pneumonia deaths recorded during the same period in 2013, exceeding  the historical average by a stark amount.

Scenes like this show “Flint’s Deadly Water” to be rock-solid example of the caliber of thorough investigative journalism “Frontline” produces. In particularly the transparency displayed in scenes showing its reporting deserves attention for the way it soberly illuminates its fact-gathering methods as well as its findings. This is not a case of a documentary team patting itself on the back for doing their jobs. It’s an instance of independent, expert-verified data in a life-or-death situation that is still revealing the extent of its effects..

It's not an exaggeration to call this is our version of “Chernobyl,” an ongoing health crisis and environmental disaster whose impact will be felt by the community hardest hit for years to come.

Over the course of the hour, interviews with Dr. Shawn McElmurry, an engineering professor at Wayne State who served as the Principal Investigator on the scientific panel formed to investigate the Legionnaires’ outbreak, reveal claims of the state's efforts to stall research and shape findings to suit the political narrative painting officials in the best light.

In one of the more damning moments, McElmurry recalls the state health department formed the panel in 2016 but, four months after doing so, had not authorized it to begin working.

When the panel met with  Michigan’s state health director Nick Lyon to warn him that the warming weather in Flint would create the perfect environs for the legionella bacteria to breed, increased monitoring for Legionnaires’ outbreaks would be crucial in order to prevent more deaths.

Lyon’s answer, according to McElmurry, is shocking: “‘They’ll have to die of something,’” the professor alleges the state’s former health director said. ("Frontline" also says Lyon’s attorney denies that statement.)

“Flint’s Deadly Water” is filled with such outrage-inducing moments, a steady work building a case of mismanagement and political malfeasance, presented evenly and quietly. The human toll is an outrage.

And Flint simply cannot catch a break. In the latest development, reported by local journalist Ron Fonger (who is featured in the “Frontline” episode) on Sunday, August 18,  the city dumped an estimated 2 million gallons of untreated sewage into the Flint River, leading officials to warn residents to avoid contact with river water due to potentially high bacteria levels related to the spill.

In October 2015, several officials were charged with felonies, including involuntary manslaughter for the Legionnaires' disease outbreak, including Lyon. Last year, a Michigan district court determined in two rulings that the cases against both officials should proceed to a jury trial. If you’ve been following this story, it may not surprise you to learn that subsequent developments hint at justice being further delayed.

And the wait for a solution and justice is killing people, as McBride’s intimate tragedy shows us. “This is not where I wanted to be,” she says in that hospital, the camera lingering on the lesions on her skin that aren’t healing as she gasps for air. Hopefully in the near future, Flint will have drinkable water again. But McBride's story is captured forever in this hour, ensuring that local and state officials will not so easily wash their hands of their negligence any time soon.