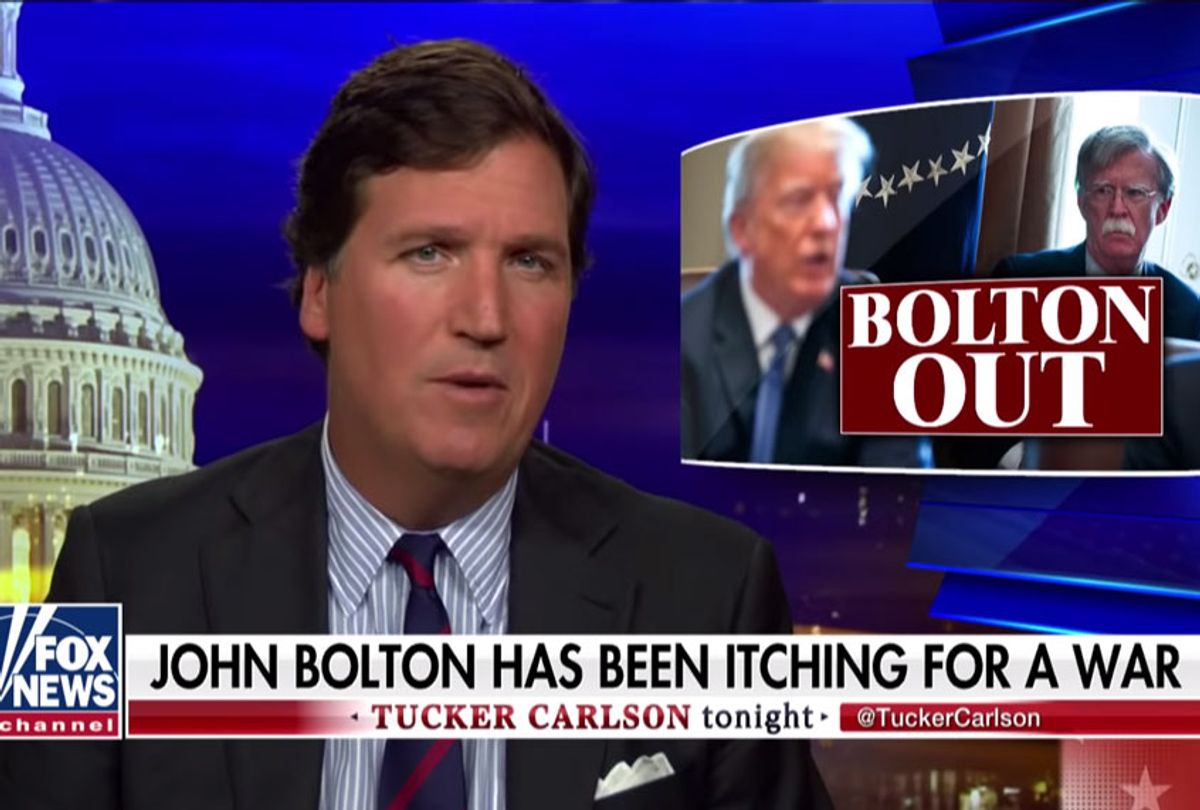 Fox News host Tucker Carlson opened his show Tuesday night by applauding the ouster of national security adviser John Bolton as he claimed that the hawkish neo-conservative was actually a "man of the left" and a "progressive."

Carlson, who had reportedly been lobbying President Donald Trump to fire Bolton and ignore his hawkish stance on Iran, called Bolton's exit "great news for America."

"Especially for the large number of young people who would have been killed in pointless wars if Bolton had stayed on the job," the Fox News host added. "They may not be celebrating tonight but they should be."

After noting several Democrats and Republicans who criticized the president's decision to fire Bolton, Carlson went on to recall the time he interviewed the former national security adviser. The Fox News host claimed that Bolton underwent "selective amnesia" during the conversation before he argued that the interview revealed the now-former national security advisor's political views were ultra-left.

"Rather than justify or even explain his own record, Bolton brags that he spent a lot of time on the job," Carlson declared. "If you are wondering why so many progressives are mourning Bolton's firing tonight, it's because Bolton himself, fundamentally, was a man of the left."

"There was not a human problem John Bolton wasn't totally convinced could be solved with the elite force of government," the Fox News host continued. "That's an assumption of the left — not the right. Don't let the mustache fool you: John Bolton was one of the most progressive people in the Trump administration."

As Carlson attempted to connect Bolton with the far-left, he notably did not mention that Bolton had spent more than a decade as a Fox News contributor before being tapped by Trump to serve as his third official national security adviser. In fact, Politico reported Tuesday that Trump became a fan of Bolton "while watching his frequent television appearances on Fox."

Additionally, over the summer, Trump allowed Carlson to tag along on his meeting with North Korean leader Kim Jong Un, while sending Bolton to Mongolia.

Trump did not name a successor but said he would appoint someone "next week." Deputy national security adviser Charles Kupperman is set to fill Bolton's position on an interim basis.

In the wake of reports that he was fired, Bolton took to Twitter to state that he had, in fact, offered to resign Monday night but that the president said in response that they would "talk about it tomorrow."

Deputy press secretary Hogan Gidley told Fox News he did not want to get into the "back and forth" over how Bolton exited, but said the president did ask for his resignation.

"The fact is the president makes these decisions," he said. "We all serve at his pleasure, and we’re moving forward."

Gidley later told reporters at the White House that there was not a single disagreement that prompted Bolton's ouster.

"There is no one issue here," he said. "John Bolton's priorities and policies just don't line up with the president's."

And the relationship between the president and his national security adviser appeared to be on shaky grounds in recent months.

Most recently, the two clashed over Trump's desire to host leaders of the Taliban at Camp David to discuss peace efforts in Afghanistan in the days leading up to the anniversary of the 9/11 terrorist attacks. The idea was strongly opposed by Bolton, while officials at the State Department argued it could move the parties closer to an agreement.

Earlier this week, Trump said discussions with the Taliban were "dead," but he was reportedly irritated by Bolton, who had been skeptical of negotiating with the insurgent group and had been feuding with top administration officials, including Secretary of State Mike Pompeo.

It has also been reported that Bolton had urged Trump to take a tougher stance on Iran, arguing in favor of striking the Middle Eastern nation to help foment a regime change. Trump, on the other hand, said he would be open to meeting with President Hassan Rouhani of Iran, and he would even consider extending short-term loans to Tehran, though that offer has so far been rebuffed.

In discussing escalating tensions between the U.S. and Iran, Trump characterized Bolton as a "hawk" who would "take on the whole world at one time," while also suggesting that he appreciated having a national security adviser whose opinion differed from his own.

"I have some hawks," the president told NBC's "Meet the Press" in June. "Yeah, John Bolton is absolutely a hawk. If it was up to him he'd take on the whole world at one time, OK? But that doesn't matter, because I want both sides."

Bolton is the third national security adviser that Trump has fired. His first, Michael Flynn, was in court for a status hearing on Tuesday ahead of his sentencing for lying to the FBI about his contacts with Russia's ambassador to the U.S.