"America's homeless epidemic is getting worse by the day," Carlson said on Fox News in April 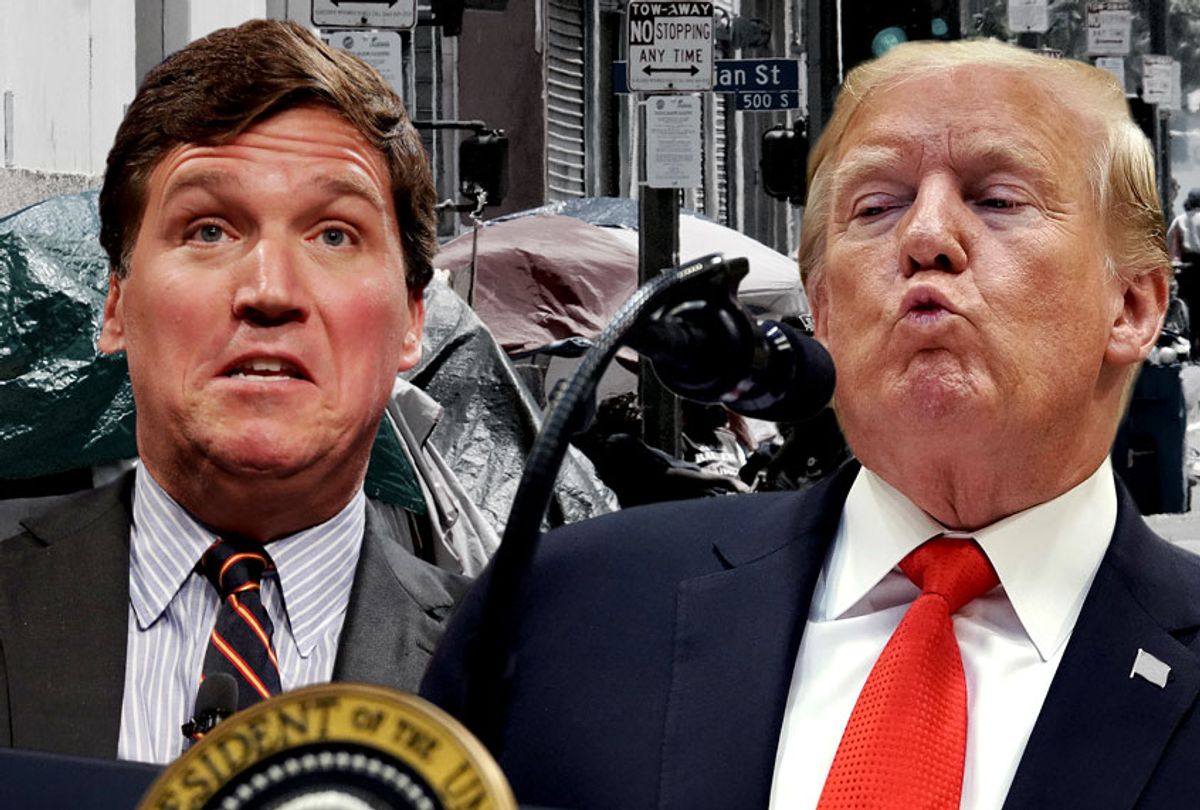 President Donald Trump is reportedly mulling the relocation of California's homeless population to government facilities, a move which would follow increased coverage of homelessness on Fox News from its top personalities.

The president has instructed White House officials to use the powers of the federal government to remove the homeless from the streets of major cities like Los Angeles, according to the Washington Post. This could possibly include detaining homeless individuals in government facilities, although it is unclear whether the Trump administration has the legal authority to do so and whether it would receive the cooperation of local officials, many of whom are Democrats.

Among the ideas under consideration are razing existing tent camps for the homeless, creating new temporary facilities and refurbishing existing government facilities, two other officials said. The officials spoke on the condition of anonymity because the planning hasn’t been publicly revealed. The changes would attempt to give the federal government a larger role in supervising housing and health care for residents.

"Like many Americans, the president has taken notice of the homelessness crisis, particularly in cities and states where the liberal policies are combining to dramatically increase poverty and public health risks," White House spokesman Judd Deere said. "President Trump has directed his team to go further and develop a range of policy options for consideration to deal with this tragedy."

Trump has attempted to publicly shame some of his most high-profile Democratic critics by tying their liberal politics to widespread homelessness and poverty.

In July, Trump doubled down on racist claims that Rep. Elijah Cummings, D-Md., represented a district which has conditions that are "FAR WORSE and more dangerous" than migrant detention facilities at southern border.

Trump also went after the Democratic Speaker of the House Nancy Pelosi over the conditions of her home district.

"Speaking of failing badly, has anyone seen what is happening to Nancy Pelosi’s district in San Francisco. It is not even recognizeable lately. Something must be done before it is too late," the president tweeted. "The Dems should stop wasting time on the Witch Hunt Hoax and start focusing on our Country!"

In a recent article published by the watchdog group Media Matters, Courtney Hagle drew attention to Fox News' increased coverage of homelessness in America, which uses similar language as the tweets that followed from the president.

"It is clear that Fox plans to make this topic a part of its strategy ahead of 2020 by using the real and serious problem of homelessness to demonize Democrats and fearmonger about socialism," Hagle wrote.

Fox primetime host Tucker Carlson, broadcast a five-part series called "Homeless in America" in May, used stigmatizing rhetoric that connected drug use and violence to poverty. Here are just a few examples:

"America's homeless epidemic is getting worse by the day. You see it everywhere but instead of fixing the problem, the left's preferred solution is virtue signaling."

"The Bay area has let itself become a haven for vagrants at the expense of the few normal people who still live there."

"A homeless man hungry for dinner digging through a trash can. We saw junkies shooting up in broad daylight and homeless people wielding makeshift knives. One threatened to stab our camera crew because we were filming there."