Julián Castro calls out a confused Joe Biden in third debate — but do voters even care?

Three debates down: Is the public noticing that Joe Biden just doesn't have the juice to beat Donald Trump? 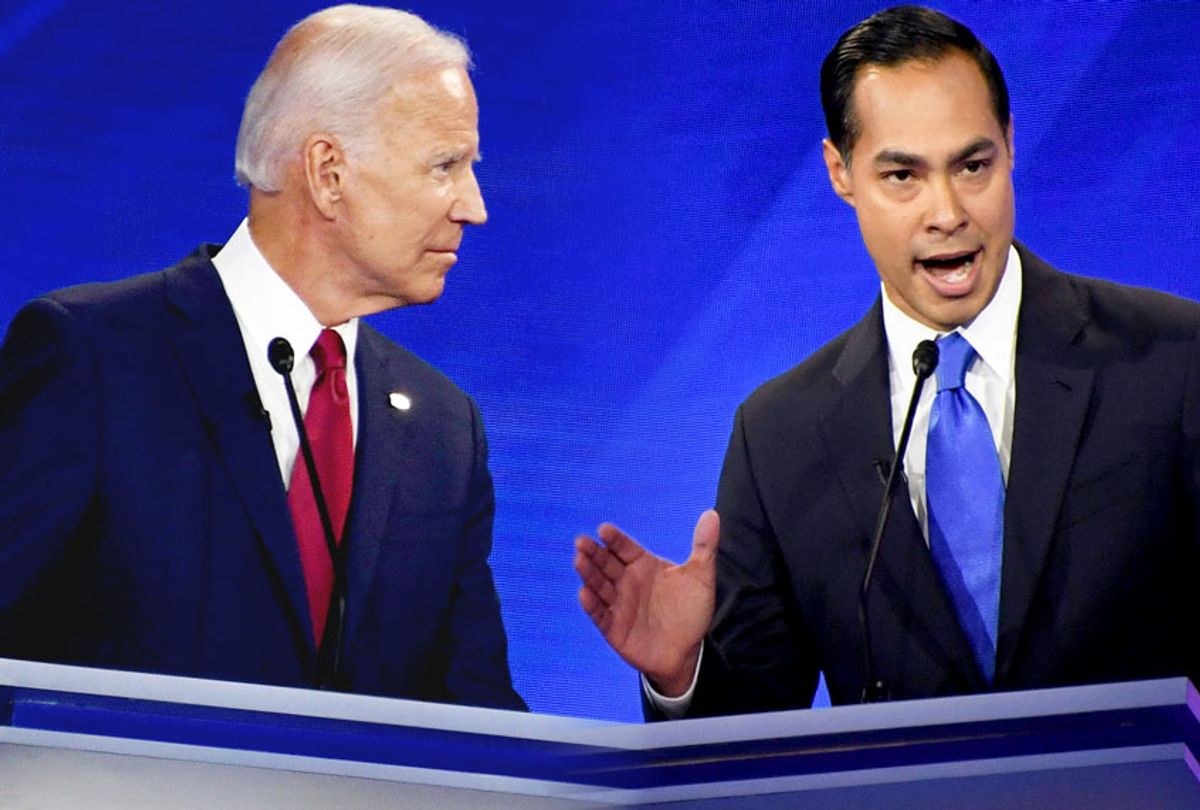 The third Democratic primary debate answered at least one question you didn't know you were wondering about: Yes, there is a limit on how much shouting Bernie Sanders can do before his voice gives out.

Outside of that, it was largely clear that the candidates had heard complaints about the negativity that pervaded the second round of debates. Overall, the exchanges in Houston on Thursday night were a lot cheerier, despite the often heavy topics that dominate an event held in times that can feel like the edge of apocalypse. There was some heated argument between progressives and centrists over health care policy and funding in the early going, but most of the night was congenial, with candidates spending more time trying to make a positive argument for themselves than taking swipes at each other.

But there was one big exception: Former HUD Secretary Julián Castro took a big chunk out of former Vice President Joe Biden during the height of the health care debate, accusing Biden of contradicting himself on health care with the line that will be the most memorable of the night: "Are you forgetting what you said two minutes ago?"

The audience's "oh sh*t" reaction and Castro's smirk made it undeniable what he was doing, which was calling attention not just to Biden's age, but to concerns that the pile-up of confused statements, memory lapses, and misstatements are about something more than Biden's long history of being what pundits call "gaffe-prone."

Unfortunately, Biden didn't do a whole lot to counter the narrative that Castro pulled out of subtext and dumped right into the text. He started the debate with criticisms of ambitious single-payer health care plans backed by Sanders and Elizabeth Warren, among others.  They were not criticisms I agree with, but they were nonetheless clear and easy to understand. But as the night went on, Biden slid back into meandering and forgetting, even once seeming to forget Sanders' name and calling him "the president".

Then, to make it worse, something started to happen with Biden's teeth that looked quite a bit like loose dentures slipping. It was subtle, but probably not subtle enough to escape the attention of Donald Trump or the demons who run his campaign. That's a real concern, unfortunately, since Trump won't be nearly as reserved in his ageist cracks as Castro was.

Folks, it was so bad that Sanders repeatedly appeared to be leaning over to Biden to comfort him, which was kind of sweet, like watching a kitten nuzzle with a doberman pinscher. But that's not the sort of thing that gives one a lot of confidence that Biden can handle the full blast of Trump's negative campaigning in a general election.

Readers will not be surprised to learn that Warren won the debate, as expected. We're only four months away from Iowa and New Hampshire, and it's already boring and clichéd to point it out, but it also happens to be true: Warren was clear and compelling, and able to explain even complex and boring issues in ways that arrest attention. She even talked about trade in a way that was both interesting and understandable, which is a tall order, even with Trump and his idiotic trade war as a foil.

Warren still seems untouchable by the candidates. Only Biden had the nerve to argue with her directly, on health care, and that probably only happened because the moderators invited him openly to do so.

Biden's criticisms of Warren, if anything, suggested that she isn't actually benefiting from the gloves-off approach. Biden leaned heavily into the fear-based approach, aided by questions that seemed deliberately framed in terms friendly to the insurance industry. That may have helped him score points with voters who are driven mostly by fear of change.

But Warren still got the better end of the exchange, popping off one of the most memorable lines of the night: "I’ve never met anyone who likes their health insurance company," and explaining that her plan would make it easier to access health care on your own terms.

To be fair, one of the main reasons Warren parried so well is that she's got serious back-up from Sanders, who is a practiced hand at dismissing the hand-wringing about taxes and reminding voters that they'll save money overall, since private insurance always costs more than single-payer health care.

And Sanders perhaps pulled the biggest head-scratcher out of Biden of the night, when Sanders pointed out that Americans "are spending twice as much per capita on health care" than countries with more universal systems.

"This is America," Biden replied, as if we should be proud of being financially gouged for what should be a basic human right.

Warren didn't go hard after Biden, but then again, she probably didn't have to. Despite a strong, if shouty, start, Biden once again was his own worst enemy. In previous debates, it was annoying. This time, however, it was closer to pitiful. In answer to a question about the history of racial injustice in America, he launched into an incomprehensible monologue about school psychologists and record players — inspiring much social-media humor about the comeback of vinyl.

Other candidates did fine. After multiple attempts, Sen. Kamala Harris finally landed a real laugh line. Mayor Pete Buttigieg and Sen. Cory Booker continue to be sharp and charismatic and, for whatever reason, not the right temperature of porridge for the moment. Former Rep. Beto O'Rourke showed considerable spirit and had a really good moment talking passionately about gun control. But at this point, it's clear he doesn't have a chance.

Sen. Amy Klobuchar — the consensus moderate no one actually likes — probably had the worst night of anyone, and seemed frankly out of her league on the debate stage. Castro made himself look like a jerk with that ageist swipe. But maybe he just bought himself some gratitude from whatever candidate gets the nomination, if voters finally conclude that Biden simply can't handle the rigors of the campaign trail.

Also, Andrew Yang promised people some money, which was worth it just to get a sincerely contemptuous bark of laughter from Klobuchar, her most human moment of the night. Trolls may think it's funny to keep propping up Yang's campaign, but trolls do not actually have a good sense of humor.

There are about one billion more of these to go, or at least it feels that way. Maybe with enough repetition, voters will finally start to see that Biden's much-discussed electability is little more than pundit-constructed smoke and mirrors.