The 800-mile, $43 billion project is intended to send liquified natural gas to China 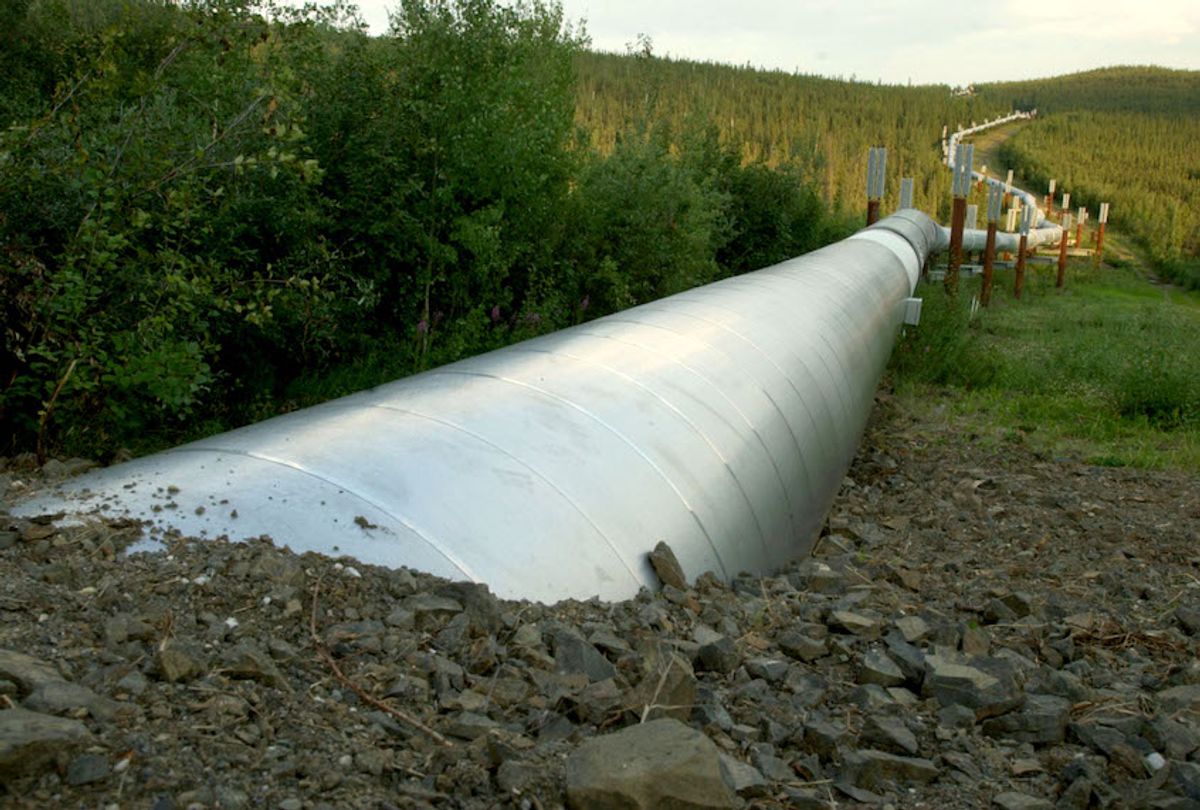 A buried section of the Trans-Alaska Pipeline emerges a few miles north of the Yukon River on July 21, 2002 in Fairbanks, Alaska. (Barry Williams/Getty Images)
--

Republicans are trying to push through a $43 billion liquified natural gas project in Alaska that could be a financial dud, harm whales and polar bears, and help cook our overheating planet.

The Federal Energy Regulatory Commission, which by law is supposed to be independent but is now stacked with Trump appointees, is considering plans for an 807-mile pipeline that would carry up to 3.5 billion cubic feet a day of gas to an Alaskan port where it would be liquified to ship to Asia.

“This reckless project would hurt polar bears, whales and coastal communities and escalate the climate crisis,” said Kristen Monsell, a senior attorney with the Center for Biological Diversity.

Donald Trump and China President Xi Jinping were in Beijing in November 2017 when an agreement was signed for three Chinese firms to buy up to 75% of the project’s liquified natural gas and help finance it. Alaska’s new governor, Mike Dunleavy, scrapped that plan.

BP, ConocoPhillips and ExxonMobile pulled out of an earlier effort in 2016 after the consulting firm Wood Mackenzie called the Alaska LNG project “one of the least competitive” LNG projects in the world. In January, the Alaska Gasoline Development Corp. fired Keith Meyer, the man who had been leading the project. Exxon and BP are paying part of the costto help the project get a permit.

Unclear who will buy gas

The $43 billion price tag for the project means that the cost of the liquified natural gas could be nearly three times the going rate on the spot market.

“That’s so far out of the market now nobody would return your phone call,”said Joe Dubler, the interim president of Alaska Gasoline Development Corp. “I mean, they wouldn’t even talk to you.”

A draft study of the environmental impacts of the project said it could harm six species that are listed as endangered or threatened: the spectacled eider, polar bear, bearded seal, Cook Inlet beluga whale, humpback whale and ringed seal.

The project would be in the middle of the range of the Central Arctic caribou herd which roams the central region of northern Alaska and could affect the caribou migration. The size of the herd peaked in 2010 at 70,000 animals. Since the mid-1990s, the size of caribou herds in the Alaska-Canada region has declined by 56%.

Alaska natives who depend on caribou and other animals for food, gather berries, and fish could also be harmed by the project, according to the study.

The pipeline would contribute as much to global warming each year as 21 coal-fired power plants. This past July was the hottest month ever recorded on our planet since record-keeping began in 1880. In Alaska, sea ice completely melted for the first time in recorded history.

Trump has stacked the regulatory commission with appointees like Bernard McNamee who helped craft a proposal to provide subsidies to uneconomic coal plants. The commission chair, former Mitch McConnell aide Neil Chatterjee, has called exports of liquified natural gas “freedom gas” that “is good for the American people, our allies abroad & for U.S. geopolitical interests.”