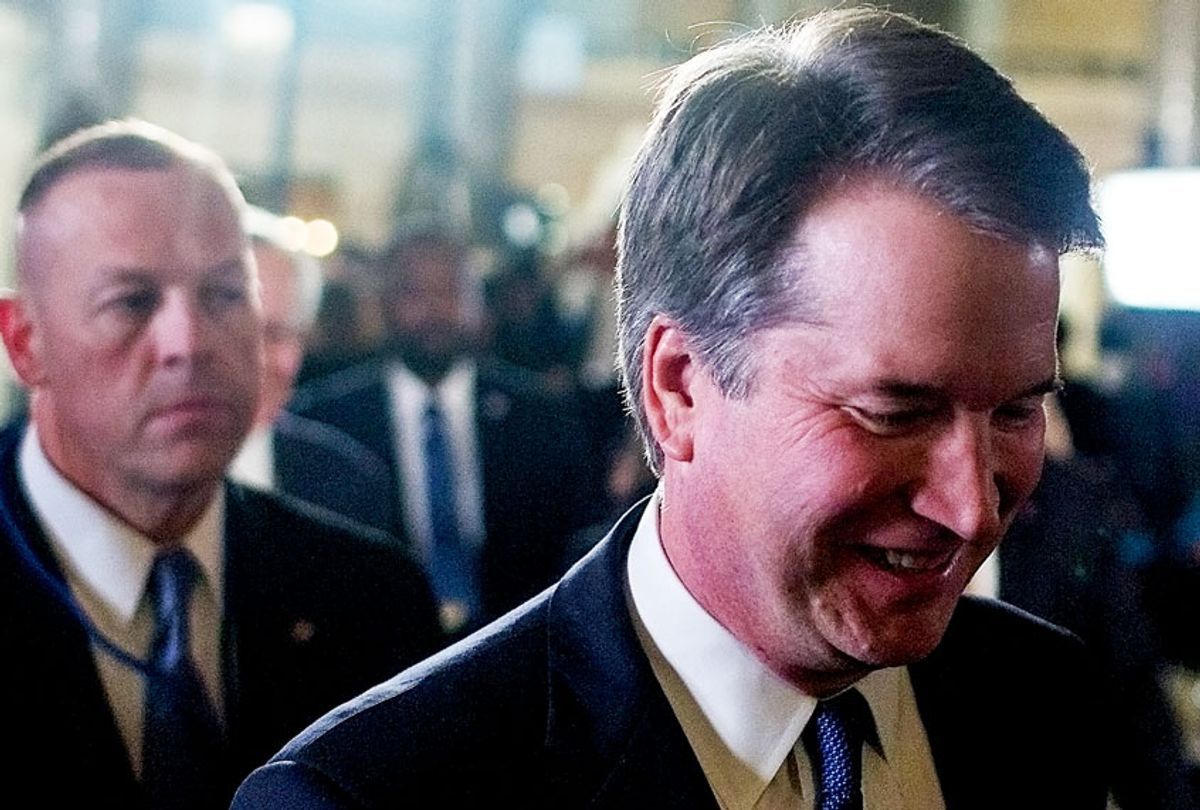 The debate over whether the most recent Supreme Court justice perjured himself during his Senate hearing last year — which would be an impeachable offense — fired up again over the weekend, after New York Times reporters Robin Pogrebin and Kate Kelly published new evidence confirming stories that Kavanaugh whipped out his penis on not just one, but perhaps two non-consenting women as a student at Yale in the 1980s.  The article was promoting Pogrebin and Kelly's new book, "The Education of Brett Kavanaugh: An Investigation," which showcases a year's worth of in-depth research into Kavanaugh's past. They interviewed many witnesses the FBI overlooked during its own investigation of Kavanaugh's background.

There's a lot to unpack in this story about privilege, wealth, gender, race and other such issues. But the bottom-line takeaway for many of us was that this confirms that Kavanaugh lied under oath during his confirmation hearings. Republicans shamelessly covered for him by limiting the testimony against him to Christine Blasey Ford, who accused Kavanaugh of attempting to rape her in high school. They refused to hear testimony from any other witnesses who might have been able to corroborate her account, or discuss Kavanaugh's behavior at the time.

Prominent Democrats reacted to the Times piece by renewing calls for Kavanaugh's impeachment, arguing that the number of corroborating witnesses that Pogrebin and Kelly have found shows that the confirmation process was "a sham," since Republicans were evidently more interested in burying evidence than collecting it. Of course that's true, as anyone following the hearings at the time could see. The entire process was set up by Senate Republicans to make it seem that there was no corroborating evidence for Ford's claims when, as Pogrebin and Kelly make clear, there was.

But in a sense all this talk about evidence and corroborating witnesses and investigative thoroughness is missing the point.  Because even with Republicans kneecapping any effort to present corroborating evidence at the hearing, it was crystal clear to any honest observer that Ford was telling the truth and Kavanaugh was lying.

Republicans weren't angry at Ford because they sincerely believed she was lying or delusional. They simply believe women have a duty to keep men's dirty secrets for them. Her real sin, in their eyes, was in not knowing her place.

As many people noted over the weekend, Kavanaugh's lies during the confirmation hearing were hardly subtle, and Republican efforts to feign belief in his lies were unconvincing.

No doubt Kavanaugh's defenders claim that they believe him and not his accusers. That's because it's more socially acceptable to express skepticism about a victim's account than to admit openly to the principle that men — at least men of a certain social class — are entitled to commit sexual assault, and women are obliged to stay silent about it.

This view of male entitlement and female silence did peek out at times. During the hearing period, Jia Tolentino of the New Yorker catalogued the number of conservatives who admitted that Ford was quite likely giving an honest account, but had no right to take offense at an attempted rape.

"Should the fact that a 17-year-old presumably very drunk kid did this — should this be disqualifying?" commented reactionary New York Times columnist Bari Weiss.

Conservatives don't actually think victims are lying so much as they think victims need to keep their mouths shut. We should require no further proof of that than the election of Donald Trump, who even the most dedicated misogynist probably doesn't believe has been falsely accused. It's not just that Trump has been accused of everything from forcible kissing to rape by at least 17 women.  It's that he's on tape bragging about how much fun he finds sexual assault, and particularly how much he likes getting away with it.

Unable to pretend that the victims are lying, Republicans basically had to admit that they think it's not disqualifying for a conservative white man to be a sexual predator.

"It was just a man being a man in a man’s world, talking to men," one female Republican voter told CNN in the days after the recording emerge in which Trump brags about how he likes to "grab them by the pussy."

The implication was clear: Sexual assault is an unassailable perk for elite men, and the real problem is anyone who would challenge or contest that.

So more proof that Kavanaugh perjured himself during the confirmation hearing won't likely move the needle much. Those lies are seen, by far too many conservatives, as a necessary evil. Kavanaugh is, in their view, the victim of grubby feminists with their unreasonable demands that men cease all sexual violence and harassment. If feminists weren't being so pushy (in this worldview), men wouldn't be forced to lie to defend themselves.

This points to the larger truth that the Trump era has nakedly exposed: The culture wars aren't really about facts and evidence, but about values. Conservatives essentially view sexism as right and good, or at least as an immovable fact that's not worth fussing over.

None of which means, to be clear, means that liberals should stop expressing outrage at the obvious fact that Kavanaugh lied under oath. There's a reason conservatives hide behind false claims that they don't believe accusers: Admitting that they simply don't care about sexual assault can alienate some voters, especially women, whose support for Republicans is already shaky. So forcing conservatives to abandon their bad-faith claims of skepticism, and finally admit they just don't care about women, is probably helpful.

Facts are good, but ultimately this is a debate about values. It's about whether we want to be a society where male dominance is so locked in that men can assault women (or other men) without accountability, or whether we want some degree of justice. To win, the left must do more than recite facts. Progressives and feminists must argue for values. They must convince people that, as difficult as this may be, it's ultimately worth it to upend the systems that have allowed sexual violence to flourish and go unpunished.