The Joe Biden wokeness paradox: Can black voters support him and also hold him accountable? 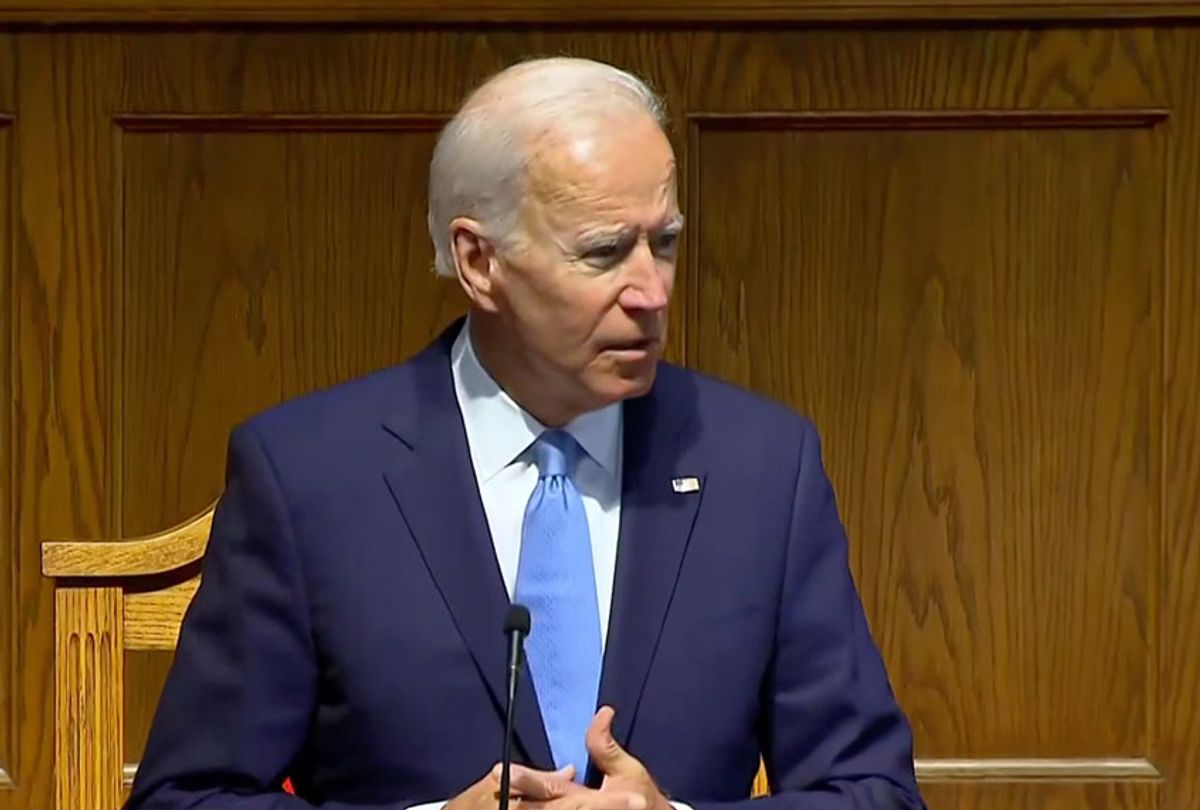 On Sunday, former Vice President and current Democratic presidential primary frontrunner Joe Biden delivered a speech to commemorate the 56th anniversary of the bombing of the 16th Street Baptist Church in Birmingham, Alabama. The 1963 act of terror took years — in the case of two of the KKK members who were convicted in 2001 and 2002, decades — to prosecute. It also marked a turning point in the Civil Rights movement, making this event a significant stop on the campaign trail for Biden, who, as the New York Times points out today, needs to demonstrate whether he "can translate his longstanding connection to black voters into votes next year."

Perhaps somebody working on his campaign figured that Biden wasn’t connecting with black voters as well as he could be. Another team member may have rejected the claim: That must be impossible, the African-American monolithic voting bloc loves Joe Biden! He's the frontrunner! But specific sticking points do remain, including the way Biden didn’t fight for Anita Hill, but rather allowed his Republican colleagues to attack her during the Clarence Thomas Supreme Court confirmation hearing. Or that pesky 1994 crime bill he co-wrote and once championed, that ended up sailing us to the island of mass incarnation we are currently stranded on.

Biden doesn't need this baggage as Iowa approaches. And Alabama, a state with so much Civil Rights history, provided the perfect opportunity for Biden to emphasize his commitment to black voters. In Alabama, Biden finally had a moment to end talk of his constant gaffes and perceived inability to understand America’s race problem, like the time he claimed, “We have this notion that somehow if you’re poor, you cannot do it. Poor kids are just as bright and just as talented as white kids.” Or when he rambled during last week’s Democratic debate on ABC, suggesting that black people don’t know how to raise their own children because we don't listen to a record player at night.

A fresh Biden took the stage on Sunday. He stuck to the script religiously, only glancing up for pauses and applauses, which helped him avoid his trademark missteps.

In Biden’s best moments, he connected the 56-year-old tragedy to hateful massacres that are happening today, like the recent El Paso mass shooting.

"The same poisonous ideology that lit the fuse at 16th Street pulled the trigger at Mother Emanuel, pastor you have such an incredible congregation. . . . pulled the trigger at Mother Emanuel and unleashed the anti-Semitism, anti-Semitic massacre in Pittsburgh and Poway," Biden said. "We saw a white supremacist gun down innocent Latino immigrants in an El Paso parking lot with a military-style weapon declaring it would stop quote the 'Hispanic invasion of Texas.' We have not relegated racism and white supremacy to the pages of history.

He also paired the pain felt by the families of the four little girls to his own grief over losing his daughter Naomi in the car accident that also took the life of his first wife Neilia, and his son Beau's death from cancer.

"When you lose a child so young, as many of us have experienced in different circumstances, the loss is always punctuated by questions, no matter how much time passes,” Biden said. “What would she look like, what would she become? What would she have done? What memories will never be?"

That was his realest moment; his only such moment, in my opinion. The rest of the speech felt like he was auditioning for the role of Newly Woke White Man in a Black Lives Matter stage play at a Delaware community theatre, saying everything he is supposed to say, everything we already know, but not answering the big question: What’s next? Why should we care about his speech? How are his words and promises going to give us anything better than the same heartbreak that so many of us are used to now?

Maybe Biden’s speech moved some and I’m jaded. But to me, he came off as simply an older version of the same guy who told a newspaper in 1975, "I do not buy the concept, popular in the ’60s, which said, ‘We have suppressed the black man for 300 years and the white man is now far ahead in the race for everything our society offers. In order to even the score, we must now give the black man a head start, or even hold the white man back, to even the race.' I don’t buy that."

Or maybe I wasn’t moved because Biden’s speech was simply basic, at a time when black voters need outcomes over sales pitches. Every politician creates a sales pitch to save black communities during election season — even the black politicians do it — and still it seems like nothing changes. Not in the schools, not with abusive cops, and definitely not with social mobility.

The gulf between a focus on emotional connection as compared to a focus on structural outcomes could explain the disconnect between the perception of who Biden and his supporters think he is to black voters and where he actually is in 2019.

Over the weekend, an old anecdote Biden likes to turn to resurfaced about his time lifeguarding at a public pool serving a predominately black neighborhood in Wilmington, which is now named after him. It's a story about how he made friends with a straight razor-toting gang leader nicknamed Corn Pop — which Twitter users found hilarious, by the way — and Biden has featured it in his autobiography. It's also mentioned here in a richly reported July 2019 Washington Post story by WaPo political reporter Robert Samuels.

As Samuels points out in a thread on Twitter, the finer details of Biden's anecdote — Corn Pop was definitely a real person, but whether or not razors and chains ever appeared remained unconfirmed in his reporting — were "ancillary to the bigger point."

"This was the bigger point of the story, which harkens today: Joe Biden clearly wanted to get to know and be involved in the lives of black people," Roberts tweeted. "Absent of that was an analysis or a willingness to understand the impact of structural and systemic racism."

"Early in his career, he actively dismissed those ideas, which are foundational to how we discuss and race and racism today," Roberts continued. "He relied on the relationships and the knowledge of his black friends." Read the whole thread starting here.

Maybe at one time emotional connection felt like enough to Biden and his supporters. In 2019, younger voters especially are demanding more.

With all that acknowledged, I still think it’s shortsighted to call, as some have, for Biden to get out of the race.

He’s the Democratic frontrunner who’s polling the best against Donald Trump, for starters. In case people have forgotten, Trump is the racist wannabe dictator further destroying our country's already damaged reputation and ruining the lives of scores of children in concentration camps at the border. We can all agree that Biden is better than Trump.

Biden doesn’t — and seemingly can’t — fit the standard template for wokeness in 2019, and to expect him to change that much at this point in his life and career might be futile. He clearly doesn’t understand the climate we live in now. And yet he is also the clear lesser of two evils, and that is a real thing. A broken finger and a broken neck both cause pain. Which would you prefer to have?

I’m not saying he should get a pass on his gaffes or his inability to understand the roles he has played in the destruction of black people. I’m saying the Democrats need a win, and badly. Democrats need to take a page out of the Republican playbook and learn how to fight to win: our incumbent is a bumbling lie-spewing idiot who accomplished nothing he ran on, but with the support of his party he's already seated two Supreme Court Justices. If Biden can maintain his lead, that's real too.

In fact, I hope Biden goes back to being his imperfect self; it's brought him this far. Even though I didn’t feel his speech, he deserves the right to learn from his mistakes, as we all do. Can Biden translate that emotional connection he feels to black voters into tangible solutions that will help right those historic wrongs? True growth is recognizing when you've been wrong, apologizing, and offering a plan that will allow us to move forward.