Trump's supporters want chaos and destruction. When their bad drug high finally wears off, it won't be pretty 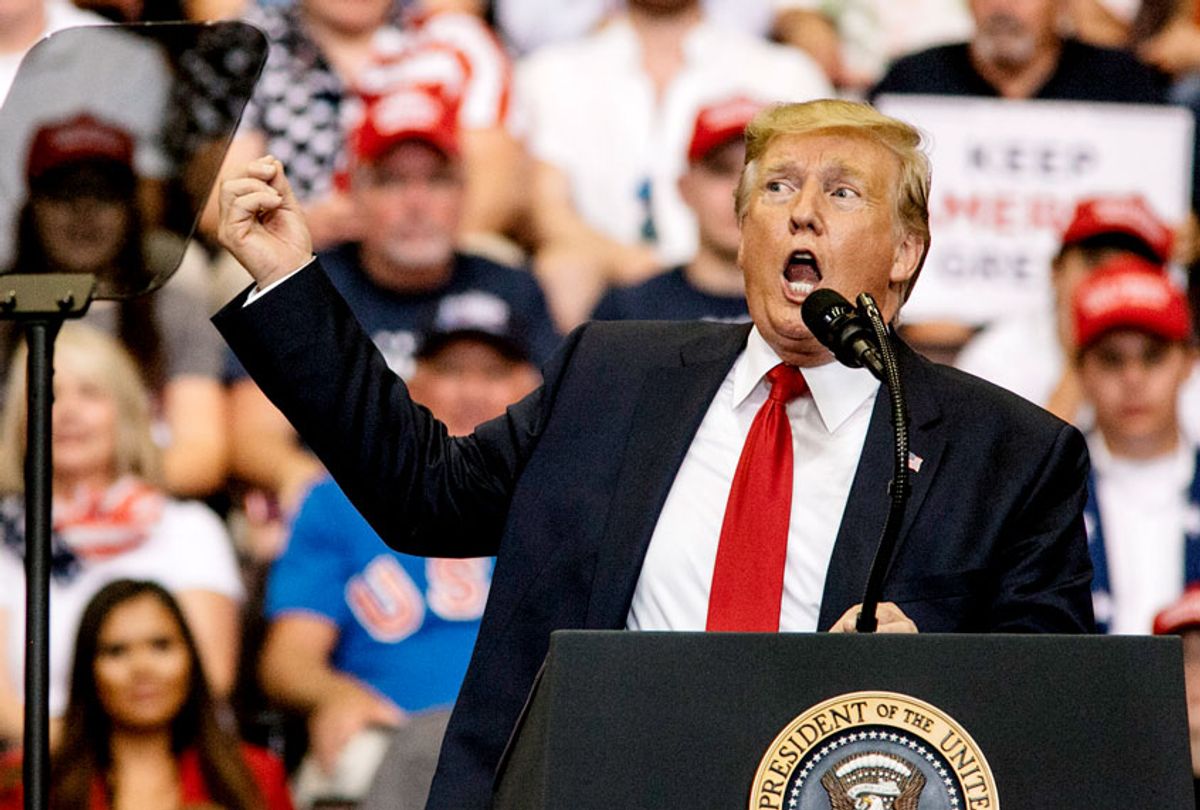 Donald Trump is the King of Chaos. He has lied at least 12,000 times since becoming president of the United States.

These lies are often obvious and lazy — such as incorrectly claiming that Hurricane Dorian would hit Alabama and then forcing scientists at the National Oceanic and Atmospheric Administration to parrot his lies. Trump’s lies are made no less dangerous when they happen to be lazy and obvious.

Trump is unapologetic and unabashed in his contempt for American democracy and the rule of law. Many mental health professionals have concluded he is unwell. He lacks impulse control and evidences sociopathic behavior.

Trump acts like a self-styled mob boss — a corrupt bully who forces his subordinates to “kick up” to him.

America’s own spies do not trust our unpredictable president to act responsibly with the country’s secrets.

Trump is mercurial in his cruelty, waiting until people are in dire need to punish them, often based on sheer bigotry and racism. Most recently he has refused to let desperate people from the Bahamas enter the United States after their homes were destroyed by Hurricane Dorian.

He tells his subordinates to break the law as they execute his plans and promises to pardon them if they do so. He fires people on a whim in order to ensure their loyalty. He ignores any restraints on his power as mandated by the Constitution.

Progress is under assault in America as Trump and his allies are overturning the human and civil rights of nonwhites, women, LGBT people, the disabled and everyone else he and his movement deem to be “less than” and the Other.

Chaos is at the nucleus Age of Trump. This chaos and the disruption and destruction it causes manifest in many ways.

Trumpism is a form of backlash politics fueled by white rage at a perceived loss of privilege and power in a more diverse and cosmopolitan world. Trumpism is a temper tantrum along the global color line fueled by anxieties about power and social dominance.

Backlash does not occur because conservative cadres and followers are anti-modern, irrational, or even unusually bigoted. Backlash is triggered, rather, because ideal and material structures of the status quo have been abruptly displaced, and those who occupied those structures wish to return to the time before displacement, when they were sitting and standing in what was obviously, and not just in retrospect, a better place.

In their 2016 article “Trump, Brexit, and the Rise of Populism,” social scientists Ronald Inglehart and Pippa Norris also locate Trumpism as part of a global right-wing movement that is channeling what they describe as “retro backlash.” This is a feeling “especially among the older generation, white men, and less educated sectors, who sense decline and actively reject the rising tide of progressive values, resent the displacement of familiar traditional norms, and provide a pool of supporters potentially vulnerable to populist appeals.”

Trumpism is doing the work of "accelerationism" — an ideology which holds that the destruction of the existing social order must be hastened, regardless of the human cost, so that a new and “better” world can be created. Trumpism is a means through which a right-wing, reactionary version of accelerationism is being enacted in the United States.

Writing in the Guardian, Andy Beckett summarizes the goals of accelerationist thinkers: “They often favour the deregulation of business, and drastically scaled-back government. They believe that people should stop deluding themselves that economic and technological progress can be controlled. They often believe that social and political upheaval has a value in itself.”

Predictably, white supremacists and other right-wing terrorists have embraced accelerationism because they understand it to be a viable strategy for destroying multiracial society.

Going beyond a conceptual framework, new research shows how backlash politics and accelerationism are lived through and experienced by Trump’s supporters — and makes clear that Trump’s hold on them will be difficult if not impossible to break.

In their new award-winning research paper "A 'Need for Chaos' and the Sharing of Hostile Political Rumors in Advanced Democracies,” political scientists Michael Bang Petersen, Mathias Osmundsen and Kevin Arceneaux show that Donald Trump’s supporters  are attracted to chaos and want to inflict it on others. They reached this conclusion by surveying a representative sample of approximately 6,000 people in Denmark (a country with comparatively low political polarization) and the United States.

The researchers asked the subjects if they agreed with the following statements:

The answers were compiled in an index that Petersen, Osmundsen and Arceneaux label as “Need for Chaos.” The conclusions do not bode well for liberal democracy. Nearly one in four respondents, 24 percent, agreed that society should be burned to the ground, while a remarkable 40 percent agreed with the statement, “We cannot fix the problems in our social institutions, we need to tear them down and start over.” Similarly, 40 percent agreed with the statement, “When it comes to our political and social institutions, I cannot help thinking ‘just let them all burn.’”

In their paper Petersen, Osmundsen, and Arceneaux describe their findings as "staggering." They write:

The extreme discontent expressed in the “Need for Chaos" scale is a minority view but it is a minority view with incredible amounts of support. … A substantial minority of individuals are so discontent that they are willing to mobilize against the current political order to see if what emerges from the resulting chaos has something better in stock for them.

People who measure high in “Need for Chaos” are also more likely to circulate conspiracy theories online. This is done not out of sincere belief but rather from a desire to cause chaos and confusion.

Right-wing authoritarians — a group that strongly correlates with Trump supporters and Republicans — are also emotionally immature. This is the conclusion of social psychologist Alain Van Hiel and his colleagues in their new paper “The Relationship Between Emotional Abilities and Right-Wing and Prejudiced Attitudes.“ Van Hiel explained his findings to the website PsyPost

The results of this study were univocal. People who endorse authority and strong leaders and who do not mind  inequality — the two basic dimensions underlying right-wing political ideology — show lower levels of emotional abilities.

When one includes the findings of other research showing that Trump supporters and other conservatives) are likely to exhibit what psychologists call the “dark triad” of human behavior — Machiavellianism, psychopathy and narcissism — we must consider the possibility of significant political violence if and when Trump is removed from office.

Donald Trump’s movement is a type of political body. The brain consists of ideologues, whether they work in the White House (like  Stephen Miller), right-wing think tanks and interest groups, the Republican Party or Fox News and parts of the right-wing echo chamber. These people see Trumpism as their best chance to destroy America’s multiracial democracy, profit from environment disaster, gut the social safety net, destroy the commons, slash taxes on the wealthy and large corporations, and/or install a Christian nationalist regime.

The muscles, bones, guts and sinew of Trump’s political body are his coalition of white right-wing evangelicals, white suburbanites who do not care about democracy or the country’s overall health as long as their 401(k) accounts continue to grow, and bigoted, rage-filled members of the “white working class.”

Does Donald Trump’s political body and fascist movement have a heart? Yes. But it is an organ incapable of caring, concern, empathy or regard for human dignity. Nevertheless, the Trumpist heart beats hard and fast.

Donald Trump is their drug. And like other drugs he fills an emotional, spiritual and intellectual void for his supporters:

All of them describe, in different ways, a euphoric flow of emotions between themselves and the president, a sort of adrenaline-fueled, psychic cleansing that follows 90 minutes of chanting and cheering with 15,000 other like-minded Trump junkies.

“Once you start going, it’s kind of like an addiction, honestly,” said April Owens, a 49-year-old financial manager in Kingsport, Tenn., who has been to 11 rallies. “I love the energy. I wouldn’t stand in line for 26 hours to see any rock band. He’s the only person I would do this for, and I’ll be here as many times as I can.”

Like other addicts, these Donald Trump's supporters convince themselves that their addiction is somehow good and normal:

Just before midnight on the eve of the Cincinnati rally, about two dozen fans lounged in lawn chairs or leaned on metal bike racks, scrolling through their phones and sipping from cans of Coors Light. A soft brown blanket covered Ms. Barten and her 12-year-old granddaughter, who slept sitting up in her camp chair.

The 57-year-old Air Force veteran’s disability check is reduced by $5 every month by an automatic donation to the Trump campaign.

“We’re not rich by any means,” Ms. Barten said. “But I’ll tell you what: When we’re rich in our hearts with our country and our president, we’re richer than anybody.”

Donald Trump delivers human cocaine for his followers. He is both a cult leader and a political drug dealer. Inevitably, Trump’s voters will come crashing down from their political cocaine high. Unfortunately, they will not suffer alone in well-deserved and hard-earned misery. Instead, they will lash out against the rest of the American people and the world in a fit of destruction and chaos.