Painting Donald Trump as a criminal should be an easy win. Why are Democrats still fumbling around in the dark? 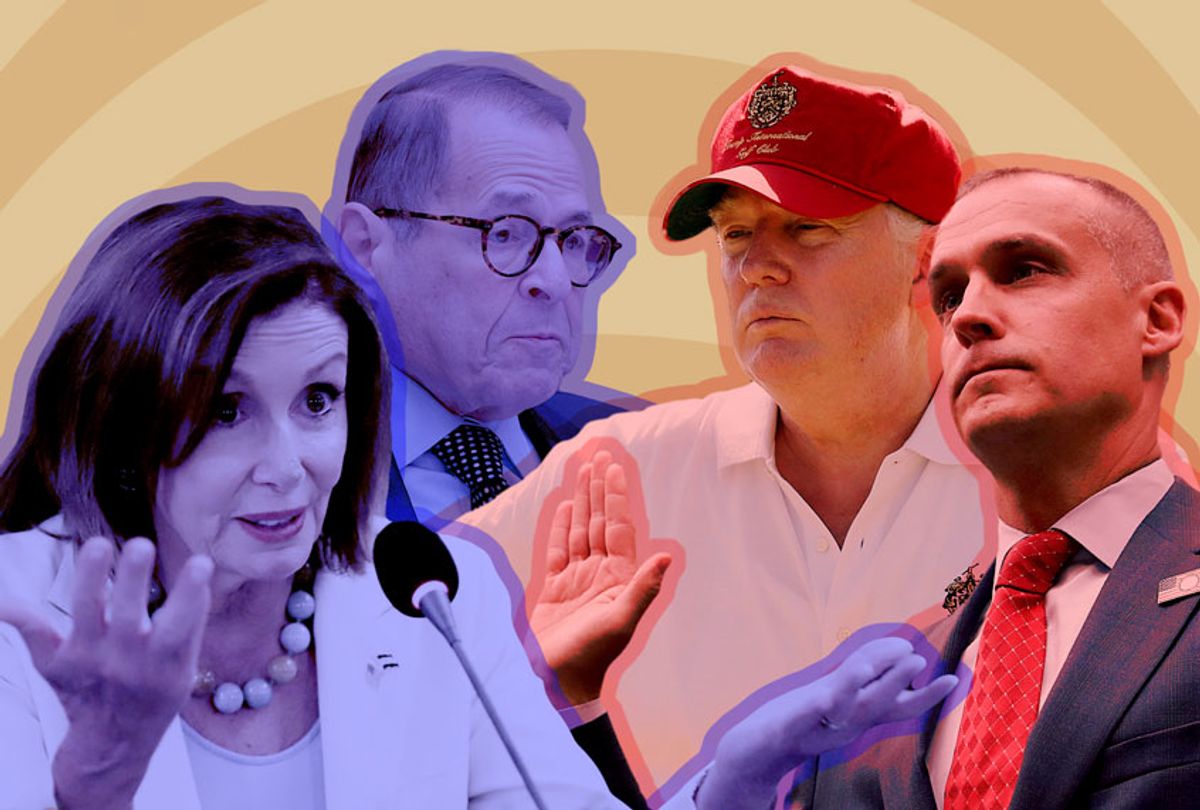 By any fair legal reckoning, the House Judiciary testimony of Corey Lewandowski, Donald Trump's unofficial aide and all-purpose jackass, was a disaster for Trump. As Salon's Heather Digby Parton noted, despite Lewandowski's theatrical performance, the actual substance of his testimony was damning. He admitted under oath that Trump had committed what would clearly be a prosecutable crime — if Trump weren't protected by his office — that being obstruction of justice. Lewandowski then admitted to trying to get another aide, Rick Dearborn, to do the obstruction on the president's behalf.

Yet, for some reason, it feels like this critical information — further proof that Trump is a criminal who is exploiting his office to commit more crimes — won't break through to the general public who needs to hear about it. And frankly, the Democrats are to blame.

On Wednesday morning, Lewandowski's testimony was not "above the fold" on the front page of either the Washington Post or the New York Times, which is where you might expect to find a story  about a former White House aide telling Congress about the president doing crimes. CNN had the story on its main website, but with headlines about how "absurd" the hearing was and not, you know, about how Lewandowski admitted that he played along as Trump repeatedly instructed him to commit crimes.

CNN's analysis is, sadly, correct: The reason this isn't getting more coverage is that Democrats are failing to deliver a clean, simple narrative of Trump's corruption.

By any reasonable measure, Democrats should be making mincemeat out of the den of criminals otherwise known as the Trump administration, making a bold and forceful case that the man in the White House is using his office to commit crimes and enrich himself at the public expense while screwing over the voters. Instead, they waste their time dithering about whether to call this an "impeachment inquiry," and somehow got caught flat-footed by the fact that Lewandowski behaved exactly like the notorious monster he is: Contemptuous, arrogant and deceitful at every turn.

It's absolutely baffling. Democrats seem to believe that Trump's corruption is of no interest to voters, so they continually underplay their hand, seemingly fearful that making too big a fuss — or committing too firmly to the word "impeachment" — will somehow backfire on them.

This fear is foolish. Crooked Media, which is run by former staffers for Barack Obama and Hillary Clinton — in other words, the Democratic establishment, not a bunch of radicals trying to overturn the system — commissioned in-depth studies by Change Research of voters in Wisconsin, a population seen as the linchpin for winning in 2020. They found that highlighting Trump's corruption was quite persuasive to voters, especially when coupled with a message about how he's screwing over the public for personal gain.

"Most voters believe that Trump is a corrupt, ineffective leader who only fights for himself and his rich friends," the analysis reads, noting that this works best if tied to an economic message that shows Trump making out like a bandit at the expense of the public.

The problem is that voters need daily, aggressive reminders of what a self-serving monster Trump is, to keep that thought fresh in their minds. That's especially true since Trump's main strategy — and pretty much his only one — will be to portray the Democratic nominee as the "real" con artist. This worked well for him against Hillary Clinton, despite being obvious nonsense. If the Democrats had a consistent, strong, and daily message about Trump's corruption — one that every Democratic candidate, officeholder and spokesperson reaffirmed at every turn — they could thoroughly define him before there's even a Democratic nominee set for him to demonize.

It's not like there's any lack of opportunities for that kind of framing. This week also featured another major Trump corruption scandal, one that showcases his self-dealing and exploitation of power as much as, or more than, the way he used his office to obstruct justice.

Politico has reported that the Air Force has repeatedly funneled taxpayer money to the Trump Organization by using a Scottish airport for refueling that just so happens to be close to Trump golf resort in Turnberry. During these refueling stops, Air Force crews have stayed at Trump's property, even though it's a luxury hotel that's supposed to be well outside normal military budgeting practices. Arguably, Air Force patronage is what's keeping the Turnberry resort afloat — without it, the airport might be forced to shut down, taking Trump's business with it.

But as Vox notes, the "House Oversight Committee had quietly been investigating both the stays and refueling stops since June," with an emphasis on quietly. Which is to say that Rep. Elijah Cummings and his committee haven't exactly broken a sweat making sure that every voter in the country knows that the Air Force is deliberately throwing coin at the commander in chief.

This is doubly interesting because, while Trump is using Air Force money to line his own pockets, he's taking away money that provides child care and schools to actual Air Force service personnel.

If the Democrats were doing a better job of messaging on corruption, making sure to pair the words "Trump" and "corrupt" in their rhetoric every single day, it would have been a lot easier to frame Lewandowski's pugnacious performance on Tuesday into a larger story: Trump is a criminal who sends his wannabe gangster goons out to do his dirty work. But while Democratic lawyer Barry Berke, who grilled Lewandowski for half an hour at the end of the hearing, did a good job, the actual Democrats on the committee fumbled.

As former GOP spokesman Kurt Bardella fairly noted on MSNBC Wednesday morning, Democrats seemed "caught off guard when they have a hostile witness from the Trump administration who’s unwilling to be cooperative to their investigation," even though that should hardly come as breaking news. It was the easiest thing in the world to predict that Lewandowski, who is mostly famous for being a jerk, would act like a jerk during the hearing.

Of course Lewandowski is now posturing on Fox News, crowing like he somehow won the day, even though he actually admitted that his boss is a crook. And no wonder Trump was gloating about how his lackey performed during the hearing.

It should be easy for Democrats to make sure that whenever Americans hear Trump's name, "crook" is the first word that comes to mind. But Democrats lack message discipline, so much so that they can't even decide if this is a real impeachment inquiry or just some vague exercise in impeachment-curiosity. Meanwhile, Trump — with his stupid aptitude for blunt repetition as a rhetorical strategy — has turned "no collusion, no obstruction" into a literal catchphrase, even though there was both collusion and obstruction. Lewandowski spouted that motto like a robot on Tuesday, even though he literally testified to the obstruction under oath.

Trump's popularity is stuck around 42% in most polls, while his disapproval rarely dips below 52%. His only pathway to victory in 2020 lies in confusing voters about his corruption and likely criminality just enough so they momentarily forget how much they dislike him. Democrats can fight back, but only if they're willing to organize around a strategy to keep Trump's corruption front and center. So far they have failed. If they don't catch up soon, there's a real risk Trump wins another term — and stays away from indictment, prosecution and prison time.