"Resistance" liberals love the FBI and CIA. History says they don't love you back

After all we know about domestic spying and overseas coups, suddenly liberals are into the national-security state 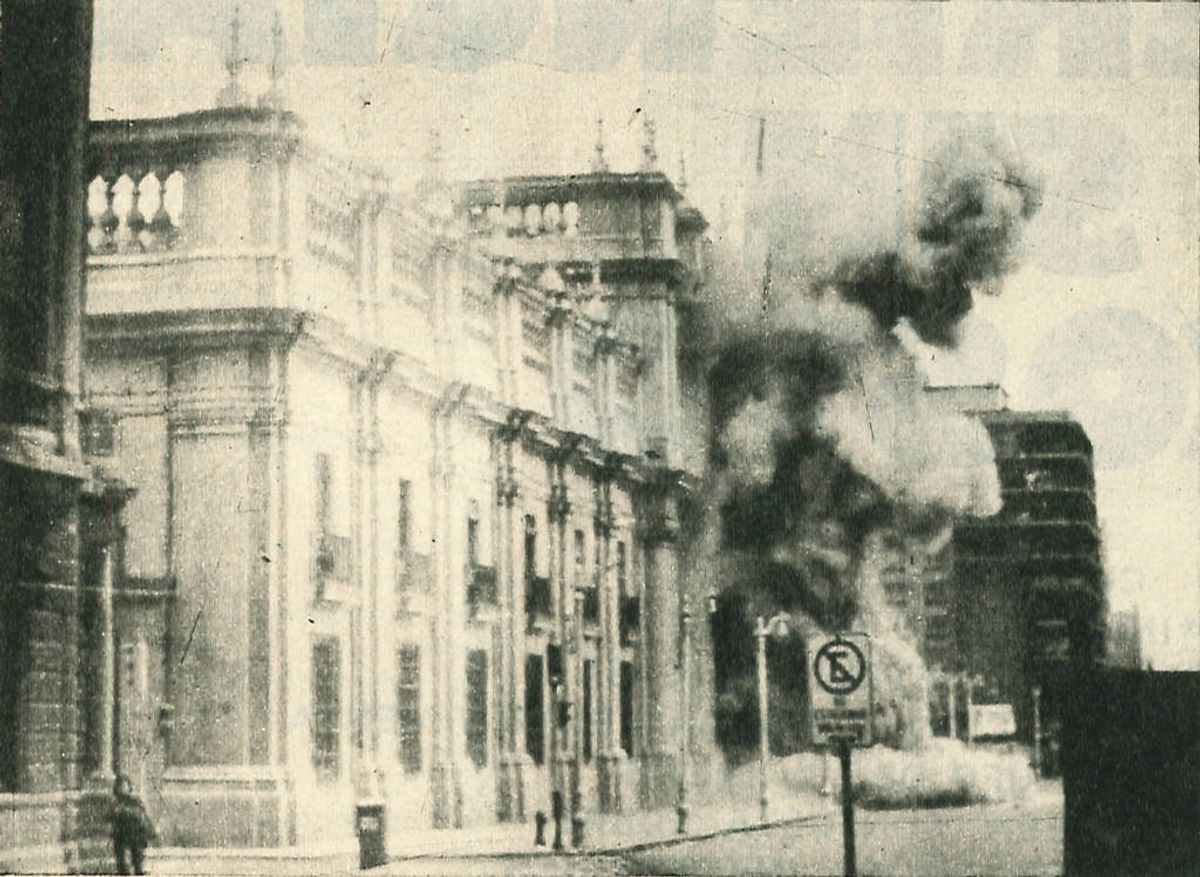 Bombing of the presidential palace in Santiago, Chile, during the CIA-sponsored coup of Sept. 11, 1973. (Biblioteca del Congreso Nacional de Chile)
--

A freaky moment recently transpired on television. In a nonfiction adaptation of “American Horror Story,” Bill Maher, nominally a member of the liberal “Resistance,” led his audience and guests in applauding and paying tribute to the FBI and CIA. To her credit, panelist (and rival talk-show host) Krystal Ball remained stoic, refusing to bring her hands together or smile. But even she allowed the moment to pass without noting the obvious: The CIA and the FBI are two of the most anti-democratic and violent forces in the history of our country.

Maher’s weird and historically illiterate “tribute” to two organizations with endless résumés of human rights violations, political persecution of dissidents and overseas coups directed at democratic governments — not to mention stunning failure at the principal tasks of their mission — punctuated his declaration of gratitude for “our safety” since the attacks of Sept. 11, 2001. The comedian and commentator then tried to dress this right-wing, jingoistic bromide in progressive drag by reminding the crowd that President Trump has “disrespected” both agencies.

“Real Time with Bill Maher” acts as a sounding board for its admittedly clever host, who can often amuse, enlighten and nauseate in the same string of sentences. His latest nonsense remark is worthy of scrutiny only because it is the most overt and odious display of a lamentable blind spot in the mainstream, Democratic revolt against the disastrous leadership of Donald Trump. Democrats in Congress, along with pundits on MSNBC and columnists for the New York Times, have made former CIA officers and directors, and veterans of the FBI — most notably the pitiful Robert Mueller — into the face of the opposition, in a seeming attempt to illustrate the enduring truth of the Rolling Stones lyric describing elections as a “choice of cancer or polio.”

Anyone with minimal sanity should agree that the United States has an imperative to excise the Trump-tumor from the White House, by whatever means necessary, But if the alternative is John Brennan, Michael Hayden, James Comey and all the subterfuge and indifference to suffering that accompanies men of their ilk, then we might as well remove the quaint notion of democracy from the executive branch of government, along with its current occupant.

Mueller, viewed by many Trump foes as the messiah of American freedom, made headlines years before his extended yawn of a report by testifying before Congress on the imminent danger of Saddam Hussein’s supposed weapons of mass destruction.  he played a pivotal role in selling a war that has cost hundreds of thousands of lives, drained the U.S. treasury, and continues to poison the Iraqi environment with levels of toxicity leading to birth defects and permanent health conditions in the native population.

Hayden, the former director of both the National Security Agency and the CIA, has become a favorite critic of Trump’s irresponsible and reckless foreign policy posturing. It is almost as if liberals, including MSNBC superstars Rachel Maddow and Lawrence O’Donnell, have forgotten or chosen to overlook that Hayden oversaw the creation of a massive surveillance program in the NSA, argued that law enforcement officials do not require “probable cause” to search the person and property of terrorist suspects, and defended the use of torture as a means of extracting information from “enemy combatants.”

When the liberal response to the threat of fascism includes such things as war without justification, the widespread violation of civil liberties, and medieval interrogation tactics that conflict with international law, it's long past time for some introspection and re-evaluation of principles.

The war in Iraq and the national security policies of the George W. Bush administration may now strike many people as aberrant — unique products of that era, driven by extraordinary circumstances and the outsized influence of ghouls like Dick Cheney and Donald Rumsfeld. But even a cursory study of the CIA and FBI's history reveals otherwise.

“9/11,” for instance, denotes an atrocity quite different in Chile. On that date in 1973, the CIA, with the encouragement of Secretary of State Henry Kissinger, supported a military coup that overthrew the elected government of President Salvador Allende, a democratic socialist. The resulting regime was led by one of the world’s most vicious dictators, Gen. Augusto Pinochet. Under his leadership, the Chilean junta “disappeared” more than 3,000 dissidents and journalists, and tortured at least 30,000 others for real or respected political resistance.

The CIA orchestrated or directly sponsored similar anti-democratic campaigns in Iran, Guatemala, the Congo, and many other countries — in most or all cases leading to regimes supported by torture, routine human-rights violations and other police-state tactics. All of these had damaging long-term consequences, although the CIA-supported overthrow of Iran's democratic government in 1953 — leading to 26 years of repressive monarchy and then the Iranian Revolution — offers an especially dramatic example.

The late Chalmers Johnson, a former CIA analyst who became a historian at the University of California, Berkeley, popularized the term "blowback" in a series of books describing how American imperialism — especially the CIA subversion of popular movements and freely elected leaders — creates hostility toward American interests around the world, often resulting in terrorist attacks. The most significant such attack in American history, the 9/11 hijackings by Islamic fundamentalists — rhetorically manipulated by Maher to praise the CIA — is the most murderous and tragic example of blowback in action.

If the CIA functions to expand American power overseas, often through violence, the FBI is the domestic execution of the same “might makes right” principle.

The ACLU issued a 2013 report on the FBI's routine abuses of its authority in the post-9/11 era, writing:

Since 9/11, the ACLU has uncovered and documented persistent evidence of FBI abuse, including warrantless wiretapping, racial and religious profiling, biased counterterrorism training materials, politically motivated investigations, abusive detention and interrogation practices, and misuse of the No-Fly List to recruit informants.

The report also documents how the FBI has implemented a hideously autocratic set of policies meant to avoid accountability and deceive the public: The “internal suppression of whistleblowers, and often misleading testimony to Congress has effectively thwarted independent oversight of the bureau, allowing violations of the civil liberties and privacy rights of people inside of and outside of the United States to continue unabated.”

The previous high-water mark of the FBI was the notorious covert program known as COINTELPRO, in effect from 1956 to 1971. This was a set of “off the books” policies, actions and tactics aimed at suppressing political dissent in the United States, ranging from getting activists fired from their jobs to the police murder of Fred Hampton, leader of the Black Panthers in Chicago.

Charles Darwin’s instructive phrase, “stamp of lowly origin,” is particularly applicable with the FBI, considering that organization was founded, at least in part, to enforce the “White Slave Traffic Act,” otherwise known as the Mann Act. Given the minor detail that there were no "white slaves" in 1910, the bureau's primary task was to prosecute black men for sexual relationships with white women.

There is an understandable impulse among many or most liberals to avoid crawling around on all fours in the conspiracy-theory sewers with Donald Trump and his assembly of “Deep State,” “fake news” weirdos. But to embrace the FBI, the CIA and their most enthusiastic apologists, however, comes close to vandalizing the entire democratic project.

In all likelihood, American liberals will soon come to regret lionizing the military-intelligence industrial complex: For instance, the next time a president — whether it's Donald Trump or a successor — pushes the country into a bloody and destructive overseas war for nebulous reasons, based on redacted intelligence reports, false premises and flat-out lies.