Steak au poivre sounds fancy, but it's the perfect dinner for busy weeknights. All you need is a pan. 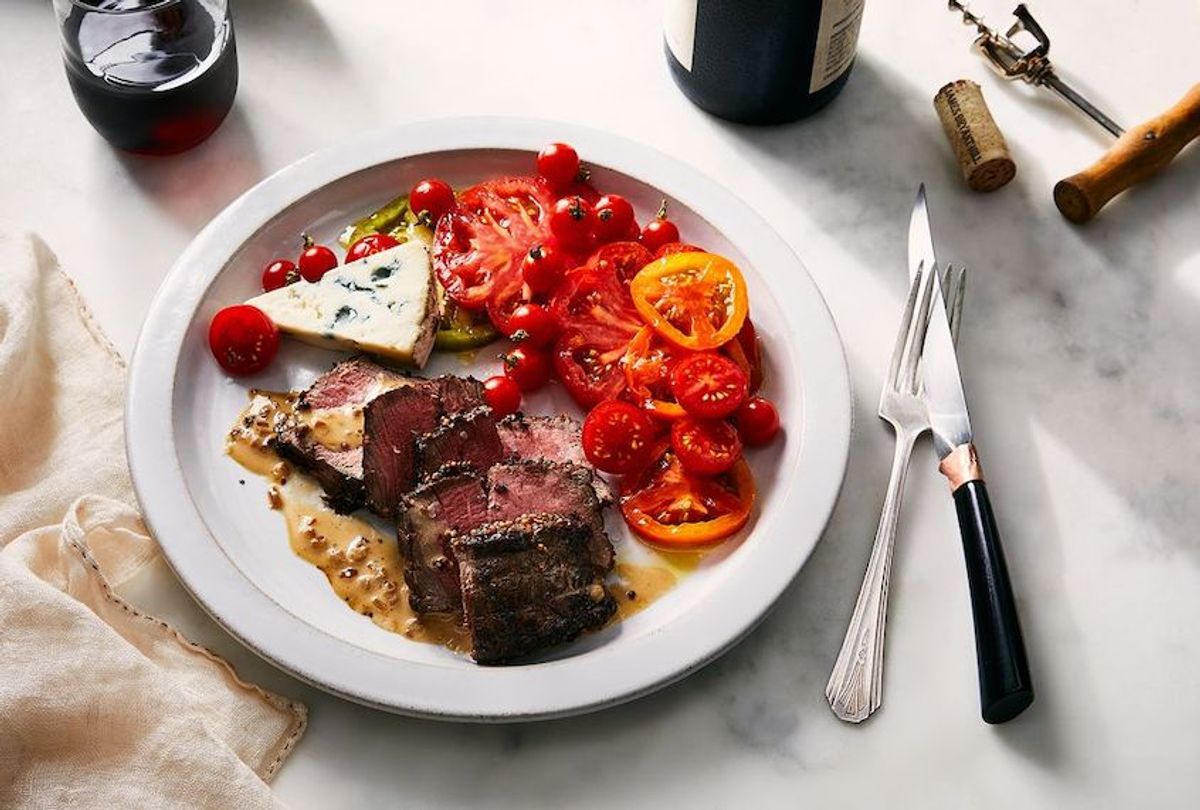 Steak au poivre is the perfect dinner. It calls for a mere handful of ingredients, many of which you’ve likely got on hand. It’s quick-cooking enough to have as a weeknight meal yet très chic enough to serve at a dinner party. And did I mention it only requires one pan?

If you’re unfamiliar with the classic French dish, it’s a meal worth getting to know. Steak au poivre is a simple steak supper with two key components: First, the beef, typically filet mignon, is crusted in coarsely ground black pepper. After the steak is seared in a pan, the brown peppery bits left behind in the pan get deglazed with either sherry or cognac and whisked into a snappy sauce.

One might argue that a dish so perfect doesn’t need any tweaking. But when I come across such a dish, I like to find new ways to enjoy it so I can make it more often and never grow tired of it.

With this recipe, I gave steak au poivre an update while still honoring everything there is to love about it: its short ingredient list, fast cooking time, and one-pan casual attitude. Surprisingly enough, all it took was the addition of one ingredient: mustard. But not just one type of mustard — deux!

Instead of coating the steak in just peppercorn, I upped the ante with some yellow mustard seed. The addition of the mustard seed gives the steak a mellow, less pungent crust with a touch of sweetness, making it more delicate-tasting than a straight-up peppercorn crust while still embodying its signature crunchy exterior.

After the steak is seared and removed to rest, I added in some shallot with a few tablespoons of butter to begin the pan sauce. Once sautéed, the pan is deglazed in typical fashion. I used cognac (instead of sherry) because it’s what Julia Child recommends in "Mastering the Art of French Cooking." But if you’ve only got sherry on hand, that works too. Once the booze burns off a bit, heavy cream and a heaping tablespoon of Dijon mustard are whisked in.

The Dijon does two things in the sauce: It thickens it into a luscious, creamy texture and adds acidity, creating a rich yet slight tanginess that pairs perfectly with the boldly flavored steak.

I like to serve the steak with a few thick slices of heirloom tomato and a hunk of blue cheese. Since it only takes one pan to cook, these no-fuss, no-pan sides make cleanup a breeze, giving you more time to enjoy that chilled glass of Beaujolais nouveau.

1. Remove the steak from the fridge and let rest for 30 minutes before cooking.

2. In a mortar and pestle, crush the peppercorn and mustard seed to a very coarse grind. Alternatively, you can place the spices in a plastic bag and crush them with a meat mallet or heavy skillet. Add the salt and mix to combine. Sprinkle half of the seasoning over the steaks and press each steak gently to adhere the seasoning to the steak. Flip and season the other side with the remaining seasoning.

3. Heat a large cast iron skillet to high heat. Add enough oil so that it just coats the bottom of the pan. Once the skillet is hot and the oil begins to ripple, add the steaks and sear for about 3 minutes per side for medium-rare. Once cooked, remove the steak to a plate to rest.

4. Keep the pan on the stove top and turn the heat down to low. Add the butter. Once melted, add the shallot and saute for a minute. Remove the pan from the heat and add in the cognac. Return the pan to the heat and bring to a bubble to deglaze the pan. Add in the heavy cream and dijon mustard and whisk to combine. Cook for 3 to 4 minutes or until the sauce thickens enough to coat the back of a spoon. Turn off the heat and stir in the chives. Taste and add more salt or pepper if necessary.

5. Slice the steak and plate. Top each steak with a big spoonful of sauce. Serve with sliced tomato and some blue cheese.