Airbnb employees are upset they're not rich yet

Tired of mere six-figure salaries, Airbnb's workers are angry that management has yet to go public 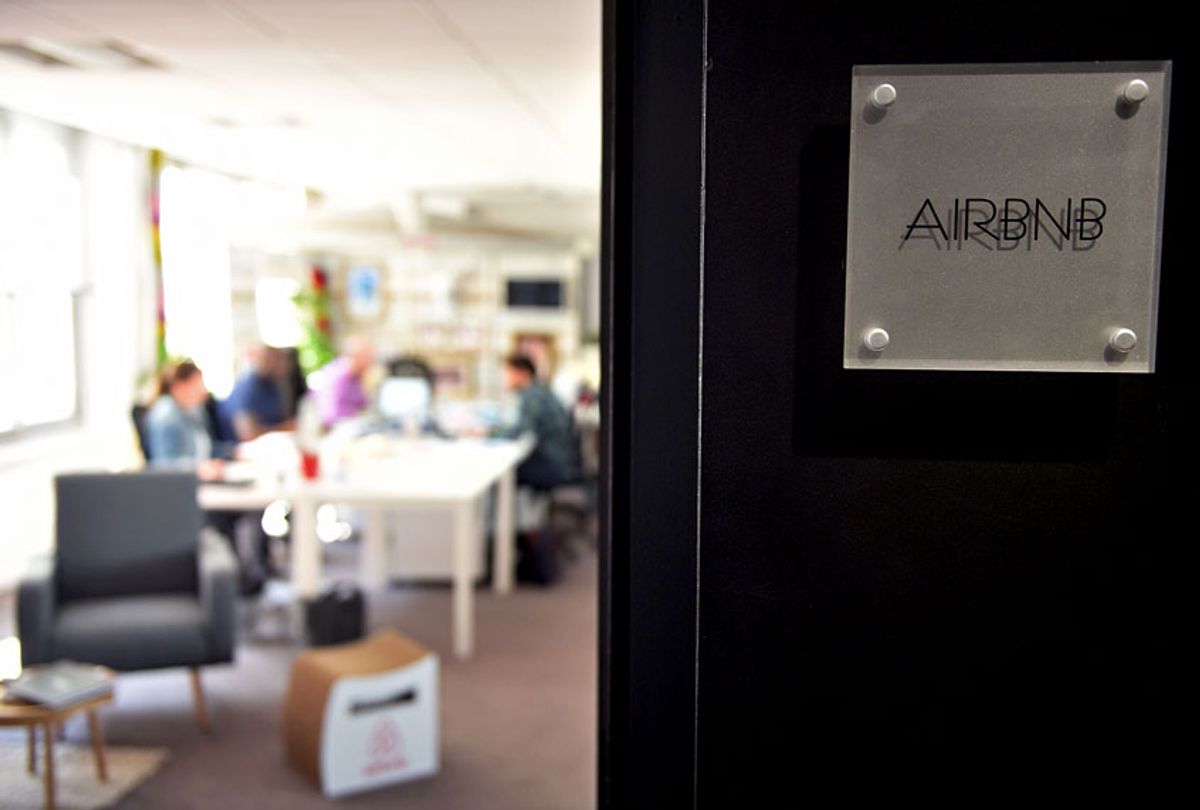 A picture shows a plaque at the entrance of the offices of online lodging service Airbnb in Paris on April 21, 2015. (MARTIN BUREAU/AFP/Getty Images)
--

The historical comparison between the California Gold Rush of the 19th century and the metaphorical Silicon Valley "gold rush" of today is more than apt, it seems, in the case of Airbnb — a unicorn startup that famously “disrupted” the hotel industry by allowing people to turn their homes into hotels, thus contributing to rising home prices in various cities and gentrification. A new investigation published in the New York Times alleges that many white collar tech workers at Airbnb are frustrated because they aren't rich — something that will happen once the company goes public and their pre-IPO stock is converted to publicly-traded stock, they believe.

As Erin Griffith reports, last summer, workers sent a letter to the company’s founders and “pleaded” to sell their Airbnb stock options, asking that the company go public. The wait has, according to the report, been such a source of stress that it is preventing some employees from changing careers and starting a family. Airbnb has been valued at $31 billion, and allegedly handed out two tranches of employee equity that will start expiring in November 2020. If the company is not public by then, those shares will be no good.

All of this is to say that is likely the reason Airbnb released a short statement last week saying “it expects to become a publicly-traded company during 2020,” which sources told the New York Times was “welcome news” to a lot of the “early employees.”

While the report is entertaining and juicy to read, it is also a reminder of the delusional aura that perpetuates Silicon Valley. The industry's modern-day myth that if you work at a startup as an early employee who is granted pre-IPO stock, you will surely become a millionaire once the company goes public or is acquired. Many tech workers often sacrifice higher salaries for more stock — hopeful that they will be one of the lucky ones.

Of course, startups rarely succeed to the degree of Airbnb, and most startup equity will forever be worth nothing. Former Airbnb employee Gabriel Cole told the New York Times he spent his life savings on his stock options after he left in 2015, which incurred a $180,000 tax bill that he didn't expect. “I was returning bottles to buy groceries,” he said.

Certainly part of the appeal of working for a startup is taking a risk on a company that could yield a high financial reward. Yet somewhere in between the birth of Google and the rise of Facebook, all tech workers were conditioned to believe the company they worked for would make them millionaires. This belief has turned many workers into ruthless working bees, motivated by a false promise of wealth.

We have seen similar stories play out before. In a separate story by the New York Times in 2015, one reporter detailed the unraveling of a company named Good Technology. The company was said to be worth $1.1 billion, but got sold to BlackBerry for $425 million. The deal primarily benefited the venture capitalists who invested in the company, and left many employees who exercised their options burned without a fortune; some even lost money. When Gilt Groupe was acquired by Hudson Bay, former employees told Recode that some of them lost more than $10,000 as a result of the deal. While these are examples of acquisitions, when a company goes public that does not mean employees accumulate wealth right away.

There are many factors that determine how much money an employee makes from an initial public offering: When a worker joins the company; how many stock options or restricted stock units they received; and when they decide to sell all determine the amount.

“People assume that everyone who works at a company that has just gone public is instantly, phenomenally wealthy,” Lise Buyer, an IPO consultant at Class V Group, told the Los Angeles Times. “It doesn’t work that way.”

Of course, tech CEOs want their workers to believe they will reap the same reward as them.

"A lot of tech workers see themselves as future entrepreneurs, but really they’re not if you look at their relationship to production," a Google subcontractor told my colleague Keith A. Spencer in his book, “A People’s History of Silicon Valley: How the Tech Industry Exploits Workers, Erodes Privacy and Undermines Democracy. "I think that’s intentional. I think there’s a lot of ideology that gets spread throughout the industry... there’s the whole mythos around these giant companies.”

This attitude compels many tech workers to identify more deeply with their boss than with their fellow workers. But at Airbnb, workers seem to be mistrustful of the company brass and trying to push them to capitulate to their will. According to the New York Times report, some former employees are cashing in via a “prepaid variable forward contract" — a kind of loan that uses pre-IPO stock as collateral.