Trump's lies about Biden will spread, unless Democrats gain control of the narrative and move toward impeachment 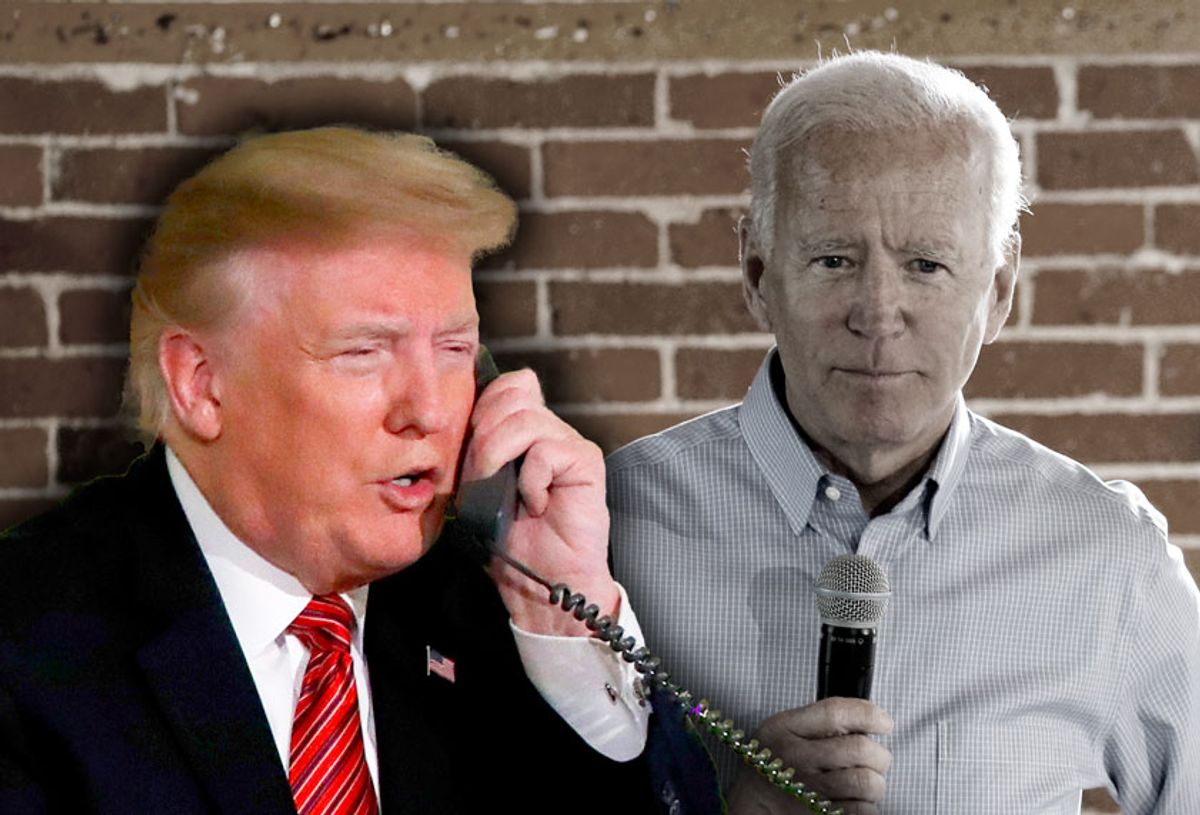 Donald Trump desperately wants his Ukraine scandal to be about former Vice President Joe Biden, who is still the frontrunner for the Democratic presidential nomination, and not about Trump's own potentially criminal behavior in trying to extort the president of a foreign country into providing (or falsifying) evidence to smear Biden.

Over the weekend, the administration's line on Trump's July call to Ukraine's newly elected president, Volodymyr Zelensky, changed rapidly. First, the effort was to half-heartedly deny that Trump pressured Zelensky, under threat of losing aid money from the U.S., to open an "investigation" into Biden — one clearly designed to give life to Trump's efforts to float a conspiracy theory about Biden's dealings in Ukraine. Then Trump, using his technique of holding press conferences in front of noisy helicopters meant to drown out reporters' voices, simply admitted that he did it.

What Trump is trying to do here isn't subtle. He's trying to turn the narrative about what he did — which law professor Barbara McQuade describes as a "public corruption crime: extortion and bribery" — into a story about unsubstantiated allegations against Biden.

Trump and his personal attorney, Rudy Giuliani, are trying to claim that Biden was the one who exerted undue influence over Ukraine's government. The accusation, more or less, is that as vice president Biden pressured Ukrainian leaders to fire a prosecutor who had investigated a Ukrainian gas company that had hired Hunter Biden, a New York lawyer who is Joe Biden's son, for a seat on its board.

The allegations against Biden appear false, like most things that fall out of Trump's mouth. The investigation into the gas company had already concluded before Joe Biden got involved, and former Ukrainian prosecutor general Yuri Lutsenko told Bloomberg News there was no evidence that either Biden had done anything improper. But as the Washington Post's fact-checking team put it on Monday, the White House appears to be "counting on that confusion to offer a fog of claims and allegations to make it appear as if Biden had done something wrong."

Here's the scary part: In this media environment, Trump might just be able to pull it off. To stop him, Democratic leadership in the House of Representatives may have no other choice but to do what Speaker Nancy Pelosi has been trying her best not to do, which is to move seriously toward impeaching Trump.

It might sound preposterous to say that Trump could successfully conceal his own corruption and likely criminality by drumming up a fake scandal about  his opponent, but it shouldn't. That's exactly how he won the 2016 election, with help from a criminal conspiracy by the Russian government and WikiLeaks to create a confusing and fake scandal around Hillary Clinton's emails.

The real story of that election was that Trump knew about this conspiracy, directed it publicly, tried to get more involved with it and then covered it up after the fact. But his efforts to distract from his own corruption by pointing media attention toward the fake scandal around Clinton worked. The fake Clinton scandal got more media attention than all of Trump's real scandals combined. Gallup polling after the election showed that the email scandal, which should never been more than a tiny blip in the news cycle, was a dominant concern of voters on Election Day in 2016.

Few of those voters could have told you why Clinton's emails were supposedly scandalous (because they weren't), but thanks to the heavy media coverage, they knew they were supposed to be scandalized. The lies worked, and Clinton lost perhaps the flukiest election in American history.

Trump is running the exact same playbook against Biden: Shady dealings with a foreign government to smear his opponent, in hopes that the fake smears get more attention than Trump's corrupt and criminal conduct. In truth, it was working, at least until an anonymous government whistleblower's complaint about Trump's behavior was leaked to the public.

The New York Times actually published a story back in May that featured most of the relevant information: The Trump administration was alleging a Biden corruption scandal, and was exerting political influence on Ukrainian leaders to produce something they could spin as evidence of this corruption. As Jonathan Chait of New York magazine notes, the Times "buried its own scoop," devaluing the revelation that Trump was once again trying to collude with foreign governments to smear a political opponent in favor of "carrying Trump’s water" by airing accusations against Biden that were swiftly debunked by the Washington Post.

Chait worries that Trump may actually pull off this smear against Biden, even as it's becoming clear that the real Ukraine scandal is about Trump. Giuliani openly admitted in a CNN interview that he had pressured Ukraine to open an investigation into Biden. But as Chait observes, the president's lawyer "succeeded in his primary goal of juxtaposing 'Biden' with words like 'corrupt' and 'scandal' dozens of times over half an hour of airtime."

So far, the only thing that's screwing up Trump's plan is that, because of the whistleblower case, he can't save the fake Biden scandal for optimal future use, which would be after Biden (hypothetically) secures the Democratic nomination sometime next year. But Trump and Giuliani clearly feel confident they can still manipulate the media into turning this real Trump scandal into a fake Biden scandal. Giuliani, who is nothing if not brazen, has already bragged about this to the Washington Post.

They may well be right. Much of the media, especially the New York Times, seem incapable of not giving life to these fake scandals over and over again.

One big reason is the addiction to "balance" over truth, and the need to make it seem like "both sides do it" and are equally corrupt. Since one party has a criminal hiding behind executive privilege as its leader, and a membership wholly devoted to covering up for his crimes, the only way to achieve that kind of phony "balance" is to invent or elevate fake scandals about Democrats.

The other reason, perversely, is novelty. Republicans being corrupt is a dog-bites-man story, as far as journalists are concerned: It's too banal to get worked up over, which means the public never actually learns about the scale of the corruption that journalists understand perfectly. Democratic corruption, on the other hand, is a sexy man-bites-dog story, exciting enough that even esteemed publications like the New York Times will shrug off the usual protocols regarding facts and context in their eagerness to run with it.

In all honesty, it's not likely that the mainstream media will get smarter about this in time for the 2020 election, especially since so many journalists and editors appear to have learned nothing from their failures in 2016.

But Democrats aren't helpless here. If they're willing to use the powers they gained by winning a big House majority in 2018, they can seize more control over the news cycle and force the attention where it belongs, to Trump's obvious criminality rather than whatever fake scandals the president is sure to generate about Biden — or about Elizabeth Warren or Bernie Sanders or whoever wins the Democratic nomination.

This has been proved in the past month. The only reason there's any focus on Trump's apparent attempts to blackmail the Ukrainian president is because House Intelligence Committee chair Adam Schiff, D-Calif., has been pushing Trump officials to hand over the whistleblower's complaint, as required by law. Because Schiff has been pushing hard — and complaining to the press about the administration's clumsy and obvious cover-up campaign — this story escalated to a national scandal, and Trump is starting to sweat.

It seems like this is new information to the Democrats, but fighting back tends to be more effective than rolling over.

Pelosi hasn't hidden the fact that she is skeptical about impeachment, because she correctly believes that Senate Republicans are too corrupt to take Trump's crimes seriously and will never actually convict him. Democrats can't even decide whether they're holding an "impeachment inquiry" when they call witnesses to Trump's misdeeds, such as former campaign aide Corey Lewandowski, to testify before Congress.

Impeachment almost certainly won't result in removing Trump. But it will create an opportunity for Democrats to make the case — witness by witness, hearing by hearing — for his corruption in a highly public way. It's especially important for Democrats to go all-in on this, and include every possible "high crime and misdemeanor" in the articles of impeachment.

Of course there are risks. It might not work. Trump, as ignorant as he is, is highly skilled at manipulating the media to advance his lies and falsify scandals against Democrats.

But impeachment is a big story, and most media will feel duty bound to cover it that way — hopefully, to the point where it drowns out Trump's lies about his opponents. It's worth a shot, and it's unquestionably the right thing to do. It's definitely better than sitting on their hands politely waiting for the next election — more than a year away! — while Trump blankets the airwaves nonstop with malicious lies.