Sexy Colonel Sanders? How the face of KFC became a (kind of weird) sex symbol

Just grab Harlan in the biscuits! "I Love You, Colonel Sanders" is here 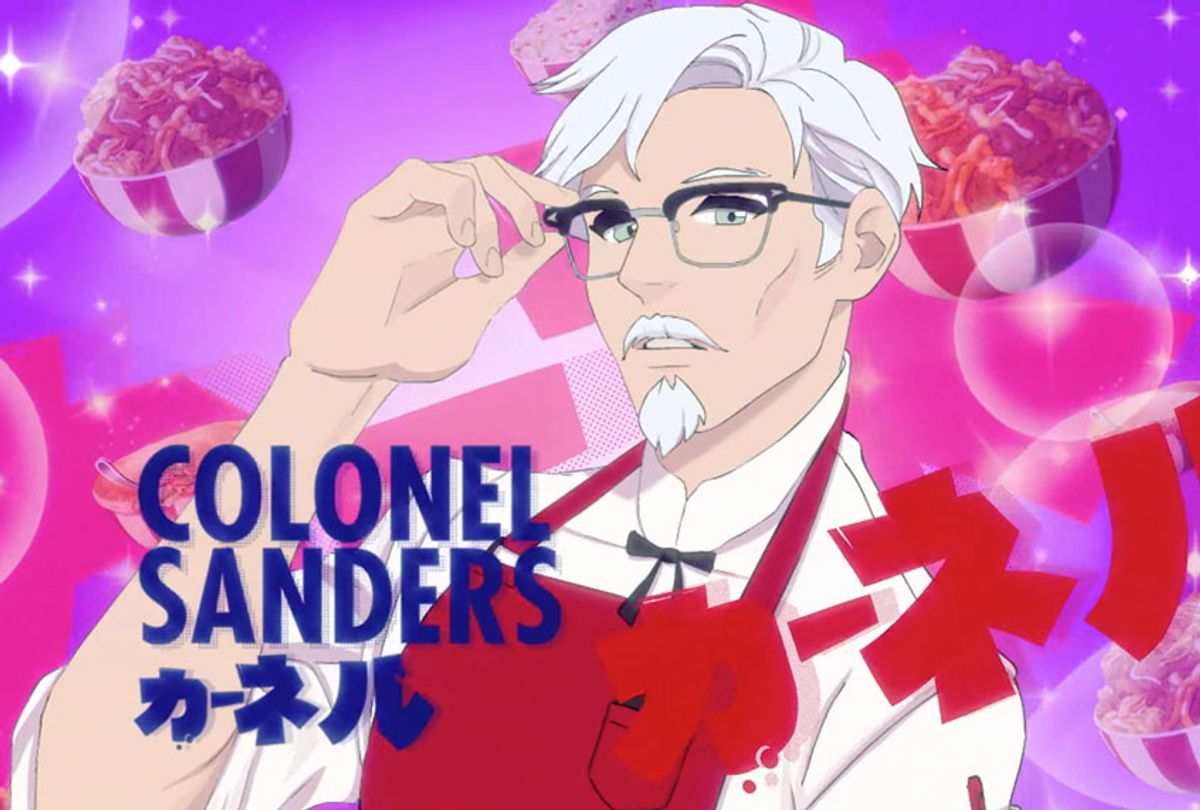 Something I’ve realized recenly is that I don't have the necessary tact to be on the Kentucky Fried Chicken marketing team, especially now that Colonel Sanders is a sex symbol. Yes, that Colonel Sanders. Over the last several years, KFC has deliberately positioned the bespectacled Southern gentleman — he of the white goatee, double-breasted suit and string tie — as an object of desire. Harlan is now hot.

“We are always looking for ways to reach new audiences and make the Colonel a part of pop culture, in unexpected — but authentic — ways,”  Jill Stowers, Associate Manager of Digital Marketing, KFC U.S. , told Salon in an email. “We want to create compelling experiences that these communities will seek to be a part of."

In 2017, the romance novella “Tender Wings of Desire” was released. The cover features a buff Colonel Sanders holding Madeline, a suburban mom dressed in a cardigan and blue jeans, in his arms. Behind them, a castle surrounded by lapping waves; to the side, a bucket of fried chicken.

The 90-page romp was described by AdWeek as “uncomfortably good” with lines like, “as [Madeline] lied in Colonel Sanders arms, she could not help but feel that she finally belonged somewhere, to someone, and she knew in that exact moment what it meant to feel love.”

Earlier this year, KFC unleashed a CGI “Virtual Influencer” Colonel Sanders. This version of the Colonel is styled like a guy who would take you for fried chicken, but at like a hipster joint with chalkboard platters and microgreens. He'd talk the whole time about his “recipe for success” — a phrase he has tattooed on his chiseled abs, by the way — then leave you on read for a month.

But he’s, as the youth would say, a total snack. So you’d probably be OK with it.

Then came the “Chickendales” internet video, a knock-off “Magic Mike 3” if they filmed in a fast-food joint on Mother’s Day. It's a lot of shirt-ripping and “Oh, howdy, Mom”s, and it's exactly as cringey as it sounds. It’s also tough to look away.

And then today we were graced with “I Love You, Colonel Sanders,” a free, downloadable dating sim in which you, a student at the University of Cooking School: Academy of Learning, are eager to snag both a culinary education and the attention of the “dreamy, enigmatic mystery student.”

The University of Cooking School has a shockingly short three-day semester, over the course of which you navigate simple scenarios while trying to endear yourself to a young, hot anime version of Colonel Sanders. The way to his heart becomes increasingly apparent: He loves talking about biscuits and sporks, but gets a little testy when you press him on his secret recipes.

The game takes about three hours to play through, and the tone is grounded pretty securely in the whimsical. The culinary instructor is a corgi. One of your fellow students is a robot. There’s a spork monster. Meanwhile, I’d classify the bulk of your interaction with Colonel Sanders as light flirtation.

As I said before, I really don’t think I have the self-restraint necessary to put a game like this out into the world and keep it PG. I mean, the sex jokes write themselves. (Bones! Finger lickin’ good! Gravy!) But it does raise the question: Who is sexy Colonel Sanders actually for?

The answer to that lies in who Colonel Sanders actually has been; not the real man who founded KFC and remained involved in its PR until his death in 1980, but the fictional symbol adopted by the company. After the real Sanders’ death, KFC launched a television campaign in 1994 featuring actor Henderson Forsythe as the Colonel.

The campaign didn’t really resonate, and the company moved to animated ads for a while. There was about a 20-year gap during which a physical Colonel Sanders wasn’t featured in their marketing. Then in 2015, KFC brought him back.

This was at a time when sales and quality had dropped for the chain — which not surprisingly coincided with the restaurant’s peak Double Down years. According to a report by Business Insider, KFC had lost more than 1,200 net restaurants over the course of 14 years, and was quickly being overshadowed by its competitor Chick-fil-A.

This Colonel was played by "Saturday Night Live" alum Darrell Hammond. It was a caricature of the traditional depiction, complete with an accent and black string tie. The tagline: “Still finger lickin’ good.”

“So far the response has been about 80% positive, 20% hate it,” Greg Creed, the CEO of KFC's parent company, Yum Brands, said at a conference a few weeks after the commercial ran. “And I am actually quite happy that 20% hate it, because now they at least have an opinion.”

Things continued to get weirder. Follow-up commercials talked about Sanders imposters, as Jim Gaffigan, Norm MacDonald and Jason Alexander all took their turns playing the character. It wasn’t quite moving into uncanny valley territory, but seeing Reba McEntire in a white goatee was definitely disconcerting.

KFC didn’t invent the concept of videos that inspire such cognitive dissonance that they just have to be shared, of course. Remember the singing Quiznos rat-like mascots? But the company did see a pretty immediate pay-off after implementing the strategy. According to Business Insider, in 2015 the brand grew system sales, the total sales of all franchise and corporate locations, by 2% in the US.

And KFC also tapped into something that is a little more difficult to quantify; throughout their market research, they found that ads that featured the Colonel contributed to millennials' belief that the brand was relevant to them.

Appealing to customers who maybe didn’t grow up with KFC — or who had abandoned the restaurant once they reached adulthood — is a priority for brand.

“We’re lucky to be part of a brand with a feisty chicken salesman at its heart, which gives us the permission to take a humorous tone and have some fun as we make Colonel Sanders and KFC relevant to a younger generation,” Stowers told Salon. "So yes, he's been in a romance novel, played by the Chickendales, and now appears in a dating simulator, but he's also been a cat climber, a WWE wrestler and an inflatable floatie.”

While the romance novel and Chippendale routine were both heavily tied into Mother's Day advertising (which is actually KFC's best-selling day of the year, with a 40% jump in daily sales), if you look at the wording surrounding those ads, they're meant for millennials to send to their mothers — or, just as likely, to each other.

For example, when the Chickendales website was still active, you could type in your mom’s name and where she lives so the shirtless dancers could perform a “customized routine” for her, which could be shared on social media channels.

In his latest turn as a leading man in the streamable dating simulator, this Colonel Sanders is definitely meant to appeal to younger consumers. There are already videos of players streaming their game walk-throughs online. New data from the Entertainment Software Association places the age of the average gamer at 34, which would fall into KFC’s desired millennial market.

He’s always going to be a character whose darkest secret is a proprietary combination of 11 herbs and spices, and it’s only a matter of time before the KFC marketing team pastes a persona upon him that suits your tastes. Perhaps a tattooed chef traversing U.S. chicken farms on motorcycle, a la Anthony Bourdain? Or are you more inclined toward the lead heart-throb in a laugh track-scored sitcom set in a chicken shack?

Or maybe, like many people, you don’t feel the need to be aroused by a fast food mascot. The marketing team has your back there, too. Just days after they teased the arrival of “I Love You ,Colonel Sanders,” KFC launched their Kentucky Fried Chicken and Doughnut Sandwich, a sweet-salty combo sure to inspire heart problems of a different kind.