In the Popeyes vs Chick-fil-A fried chicken war, a sandwich is never just a sandwich

When I heard about #PopeyesGate, I thought about my mother. I wish she were here to eat with me 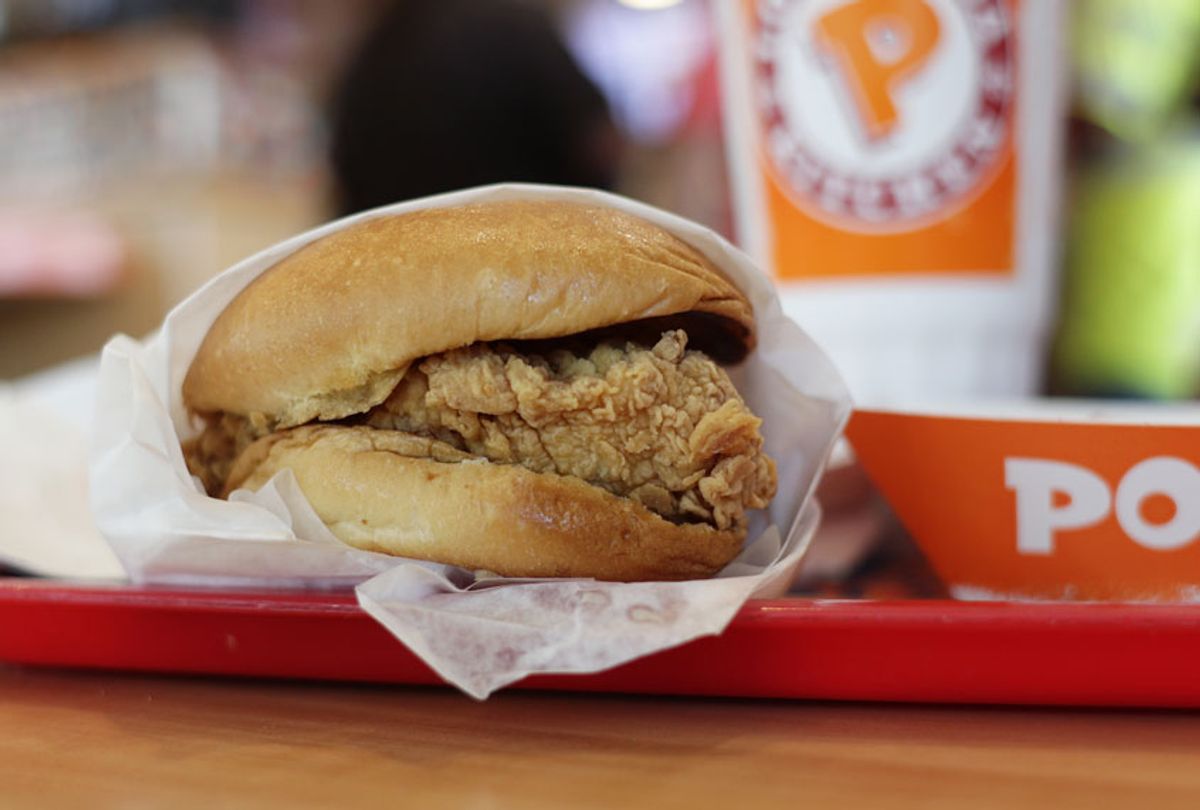 The fried chicken chain known as Popeyes showcased sense of humor this month when it teamed up with a Los Angeles chain that once got busted for selling its reheated tenders to launch its newest menu item: a chicken sandwich.

Then it proved it was a true rebel when it dragged the home of the original chicken sandwich, Chick-fil-A, on Twitter. The ensuing social media opinion storm sparked the hashtag #PopeyesGate. Wendy's, who is now equally known for its delicious shade on social media as its freshly made burgers, even joined in on the beef.

If you aren't familiar Chick-fil-A's history, you're unlikely to know what makes the Great Chicken Sandwich War of 2019 so provocative. It's not just about who has the best chicken sandwich — though I can tell you without a doubt who wins that fight — but also about what the money for Chick-fil-A sandwiches funds. It's a national story. And for me, it's also personal.

When I caught wind of the chicken sandwich fight, the very first thing that came to mind was my mom. I lost her last year to leukemia and ovarian cancer; I would have loved to have shared this moment with her.

In the dog days of 2012, during the first summer after I moved to New York, I flew home to Alabama to visit my mom. She worked as the disciplinarian at the Catholic high school I graduated from, where she had also been part of the first graduating class. I arrived at lunch time, and as I walked inside the glass doors to find her, I noticed something peculiar: It was a ghost town inside despite the nearly 100-degree heat outside. Yes, it was summer, and the students were on break for a short time still. But faculty members were nowhere to be found.

"Where is everyone?" I asked my mom, who proceeded to tell me that the priest who served as school president had put in an all-hands call to go out to lunch at Chick-fil-A.

Remember, this was August 2012 — the Supreme Court wouldn't make marriage equality the law of the land for almost another three years, and the national culture-war battle around it was in full swing: existing bans like California's Proposition 8 were being fought in the courts; New Jersey Gov. Chris Christie vetoed a bill that would have legalized same sex marriage as governors of other states like Maryland and Washington signed theirs into law; Rep. Barney Frank, D-Mass., became the first member of Congress to marry a member of the same sex.

What does any of this have to do with fast food? Gay rights activists had just held a "kiss day" at Chick-fil-A, in response to the chicken company's record of supporting anti-LGBTQ political causes. The religious right responded in full force by lining their cars up by the thousands in the chicken chain's drive-thrus in a quest to buy them out.

"I told him he was an idiot," my mom said. She had a salad from the Subway around the corner sitting on her desk instead.

Yes, I had a mom who always stood up for her gay son. Even though it was not a welcome opinion in her place of work, she did what was right.

Chick-fil-A — the business, the chicken itself — cannot be separated from the deeply-held religious beliefs of its founder, a devout southern Baptist named S. Truett Cathy. That wave of protests in 2012 had been triggered by Cathy's advocacy for the "biblical definition of the family unit" during the heat of the war to legalize same-sex marriage throughout the country.

“As it relates to society in general,” he said, “I think we are inviting God’s judgement on our nation when we shake our fist at him and say, ‘We know better than you do as to what constitutes marriage.’”

But it's not just what the Cathys say — it's what they do with the dollars you hand over to them when you buy their chicken sandwiches. As Gaby del Valle reported earlier this year for Vox:

In 2011, the same year a Pennsylvania Chick-fil-A franchise donated food to a local anti-gay organization, the LGBTQ advocacy group Equality Matters obtained tax records which revealed that the Cathy family had donated more than $1.9 million to anti-gay groups in 2010 through the WinShape Foundation, the Cathy family’s charitable giving organization founded by Truett Cathy in 1984. Those donations included a $1.1 million gift to the Marriage & Family Foundation, a group that promoted so-called traditional marriage and opposed both gay marriage and divorce; $480,000 to the Fellowship of Christian Athletes, an athletic organization that requires applicants to agree to a “sexual purity statement” that condemns LGBTQ people for living “impure lifestyle[s]”; and $1,000 to Exodus International, a group that promotes anti-gay conversion therapy.

And that only scratches the surface. Chick-fil-A has since emerged as a culinary symbol of the culture wars between the religious right and progressives, even after the 2015 SCOTUS ruling on Obergefell v. Hodges. Texas, one of the deepest red states in the country, passed a religious freedom bill known as the "Save Chick-fil-A Bill." The cast of "Fox & Friends" literally threw Chick-fil-A chicken sandwiches at audience members during their first live show. President Donald Trump dished them out during his much-criticized fast food feast for athletes visiting the White House. Make no mistake, those moves have nothing to do with the taste of the sandwiches: It's an in-your-face punch of religious bigotry.

And yet I had moved to a northeast coastal city where my daily life had been free of Chick-fil-A. But since 2012, the company has expanded into Manhattan. And now, every time I walk by one of their new locations — the house of "hate chicken" in my city — I cringe on the inside.

Chick-fil-A is now the largest chicken chain in the country, and it also has made the unsubstantiated claim that its founder was the actual inventor of the chicken sandwich. "Since 1957, Home of the Original Chicken Sandwich," its website reads. (Before you ask: Yes, this is all captured on the Wikipedia entry for "chicken sandwich.")

At my old Catholic high school, a local Chick-fil-A catered our lunches more than once a week. As a result, I've consumed hundreds of Chick-fil-A chicken sandwiches in my lifetime. I know the taste of them well, and it's pretty flavorless. I've honestly never understood the buzz and that was before I was an out gay man who cannot in good conscience dine at a Chick-fil-A.

And so when I heard about #PopeyesGate, I thought, wouldn't it be ironic if the "inventor" of the chicken sandwich doesn't make the very best chicken sandwich? I penciled in a calendar entry — "Date with Popeye" — to find out.

Unfortunately, my first attempt to go to Popeyes was a complete bust. I arrived at 1 p.m. on  Wednesday to a line that was literally out the door — and not moving fast. But that was not enough to deter my pursuit of fried bliss.

I work an early shift at my home office, so more often than not I find myself starting to crave lunch while morning TV is still on the air. But I have a rule: I won't allow myself to eat lunch before 11 a.m. Otherwise, it's not lunch. So the next day I set an alarm for 10:59 a.m. on my iPhone, and dashed to the Popeyes on the corner of 145th Street in Harlem the next day when it went off.

At this early hour, there was only one person in front of me in line, but by the time I left, the lunch-hour dash was in full swing. It turned out that the reason there was such a long line was because whether you order the classic or the spicy version, Popeyes' chicken sandwiches are made fresh to order. And everyone who proceeded to order while I was still waiting patiently for my classic chicken sandwich to be tucked neatly into a foil wrapper also ordered the very same thing.

I arrived home to a still-hot sandwich, and let me tell you: If you have one, you'll never want to go back to Chick-fil-A again. On paper, both sandwiches sound the same: Each fried chicken patty comes neatly tucked between a sweet bun with pickles on the bottom. But they couldn't be more different.

There's something distinctive about how the Popeyes sandwich feels in your hands. The patty is very thick; the bun is soft yet firmly holds the sandwich together at the same time. You can really grab it as you bite in. In my experience, the less hearty Chick-fil-A sandwich sags limply its bun.

That's why Popeyes sandwich was such a pleasant surprise. The bun is sweet but overwhelmingly so, with the chicken crisp and and perfectly salted. The pickles, which I would always discard from my Chick-fil-A sandwich, added the right kick of sour, the added mayo the perfect extra amount of fat. I rarely eat fried chicken without ketchup, and I only had two bites left when I realized I had not added any. Yes, it's that good.

I've lived two city blocks away from a Popeyes for three years now but I had never been inside before this first chicken sandwich. I'll soon be back to try the spicy version. "The Popeyes chicken sandwich is here to save America" Helen Rosner recently proclaimed in the New Yorker, and I think she's right.