Churches are preaching the Gospel of Lizzo now 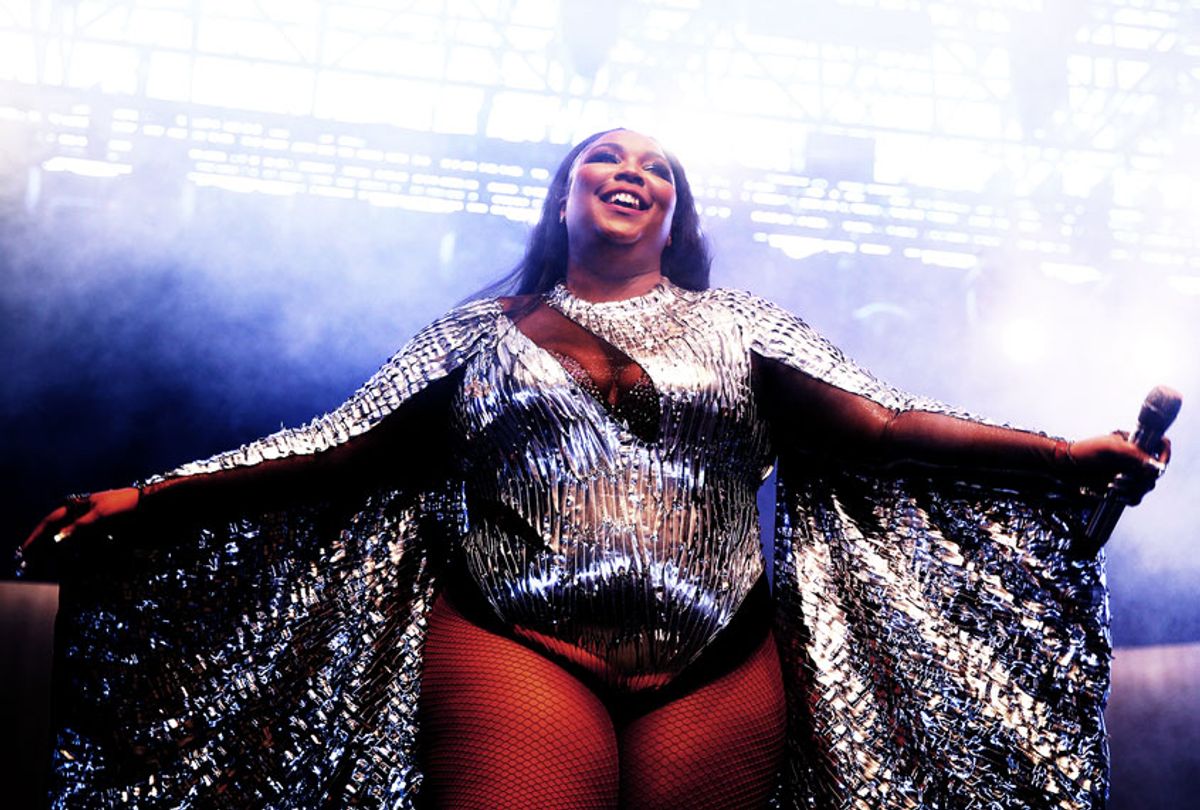 Lizzo performs at Mojave Tent during the 2019 Coachella Valley Music And Arts Festival on April 14, 2019 in Indio, California. (Rich Fury/Getty Images for Coachella)
--

Halfway through her 2019 VMA Awards montage of “Truth Hurts” and “Good as Hell” Lizzo delivered a sermon — a pink platform her pulpit; a giant inflatable, twerking butt an altar of sorts.

“Let me talk to y'all for a second,” she said. “I'm tired of the bullshit. It's so hard to love yourself in a world that doesn't love you back . . . Feel good as hell because you deserve to feel good as hell.”

Cue the gospel-like “ooh” chorus from her back-up singers; they’re posed angelically behind her  on fluffy, white cloud set pieces. Lizzo then launched into a call and response. “Baby, how you feelin’?” she asked the rapt crowd. “Good as hell!” they exclaimed.

Hearing religious language used to speak about Lizzo — and her rhapsodic messages of self-love and acceptance — isn’t unusual. Numerous music writers have described her engaging on-stage style as “preaching.” It’s something the artist leans into as well. In a sold-out performance at Radio City Music Hall earlier this week, she began her set by asking the crowd, “Y’all ready for church with a twerk?”

But as Lizzo’s music has struck such an overwhelming cultural chord, a number of pastors across the United States have in turn started using her music as a jumping-off point for theological discourse — taking her songs from the pop charts to the pews.

Lauren Jones Mayfield is a pastor in the young adult ministry at Highland Baptist Church in Louisville, Ky. She was in the midst of a three month-long series called “Theology of the Body” when she came across a video of Lizzo’s NPR Tiny Desk concert.

“Who doesn’t want to talk about Lizzo these days?” Jones Mayfield told Salon. “Her message of self-love, self-preservation, and self-empowerment is relevant in all the ways. Why should a church setting be exempt from the beauty of her wisdom and life experiences?”

According to Jones Mayfield, Christian scripture provides example after example of the people of God wandering away from the Divine, only to find reconciliation and redemption.

“Through this ebb and flow of the human experiencing we tell ourselves harmful messages that increase our separation from God and from our authentic, true self,” she said. “Each time we step into all that God has created us to be and reconnect with ourselves, our talents, and our understanding of peace and love at work in this world, we become more whole. I tend to believe that Lizzo would agree.”

Jones isn’t the only Christian religious leader  to incorporate Lizzo into their messages. Ryan Coatney, a Nashville-based pastor, has used the singer’s Instagram account to round out a discussion about “frameworks for meaning, self-worth, significance.” New City Church in Minneapolis posted a video in which Pastor Tyler Sit encouraged congregants to think of Lizzo as an entity who finds “the sacredness to be found in the profane."

“The things that society has said are dirty or shameful are actually where we encounter God the most,” he said. “Lizzo is trying to show us that the things we have to be worried about are not sexual purity, being afraid of our bodies, are not a hatred of fatness … it is denying how beloved by God we actually are.”

There’s a long, tenuous history of overlap between the sacred and the secular in American music. It’s common for popular artists to borrow from gospel traditions, from Sam Cooke’s soul discography to Ghostface Killah’s “Metal Lungies.” Lizzo is just one of many performers who were influenced by their religious upbringing and singing in the church.

As a 2018 Teen Vogue profile reported, "Lizzo learned the power of gospel at her Pentecostal church where 'secular music was the devil.'"

“I see similarities from gospel to metal music in the technique and in the feeling,” the artist told Teen Vogue. “I think because of that I’m able to find that common thread . . . I have to find the soul in everything.”

Consider the 1982 Christian fundamentalist film called “Rock: It's Your Decision” that centers on, as the movie’s tagline advertises, “teenage conflicts over music.” It’s a bizarre, cringe-worthy piece of propaganda-lite that found an audience in the age of Tipper Gore’s Parents Music Resource Center and their “Filthy 15” list. Watching it now, the film may feel of another time, but as someone who was raised in church in the South, trust me — the sentiment is still being preached.

But the once-defined lines between the sacred and secular have been blurring since the late 1960s when "Jesus Music" and the first examples of Contemporary Christian music began to emerge as evangelical churches, in particular, wanted to appeal to young people. These were songs that co-opted the sound and feel of popular music, but had lyrics about God, salvation and Biblical concepts.

It's been controversial from the start. There are some Christians who feel the genre is a modern way to express their faith and reach others for Christ. "South Park" has made fun of it, of course, in an episode in which Cartman's band Faith + 1 covers love songs, swapping in Jesus as the object of desire. Meanwhile, the conservative and influential evangelical college Bob Jones University has long discouraged its students from listening to the genre.

But secular music breaking into sacred spaces is nothing new; it goes back to the 16th century at least, when Martin Luther broke away from the Roman Catholic Church and founded what would become the Lutheran church.

“In establishing this new church, he knew he needed a music that would be accessible to the average churchgoer,” music historian David Metzer told Salon. “And to that end, he drew upon folk music, the songs that the average person would know and could sing. He thought that the perfect way of involving people in the church service and so he used folk music and he had no qualms about doing it.”

“He has this wonderful quote, he said, ‘The devil does not need all the good tunes for himself,’” Metzer continued.

From that point, there’s a line that can be traced through history connecting artists, from Thomas Dorsey, a 1930s African American composer who became the father of gospel, marrying sacred music to the blues; to jazz saxophonist John Coltrane, who inspired St. John Coltrane Church in San Francisco; to Hip-Hop Church founder Kurtis Blow and now Kanye West’s cross-country Sunday Services.

“Some of Lizzo’s tunes in some ways don't belong there, like, ‘Juice’ is about vodka,” Metzer said with a laugh. “I mean, I don't even think Martin Luther would put up with that one. But I think where she’s finding an audience in church is in how she taps into two ideas of soul from the 1960s.”

The first, Metzer said, is in embracing “soul” as an expression of innermost feelings, and the second is viewing "soul" as musical and emotional energy that transforms and uplifts.

“So those are bedrock things of an Aretha [Franklin] and Sam Cooke,” Metzer said. “And she adds to those two ideas by tapping into an emotional moment that has become part of popular culture in the last 20 years  — that of self empowerment, of declaring your self-worth and fabulousness in the face of scorn and doubt.”

An inherent tenant of Christian theology is that humans are made in the perfect image of God, but in all my years attending church, I don’t think I ever heard a sermon on the topic of body-image or self-worth. This is one area where Lizzo’s music has an opportunity to resonate from the pulpit — it’s filling a gap and bringing up questions that haven’t been traditionally asked or answered in many religious settings. The God Lizzo’s music points to, she said, is one of love — of Him, of neighbor and of self.