What Amazon, Walmart employees risk when they use the workplace for activism

There's no First Amendment in the workplace, which leaves worker activists at the whim of their employers. 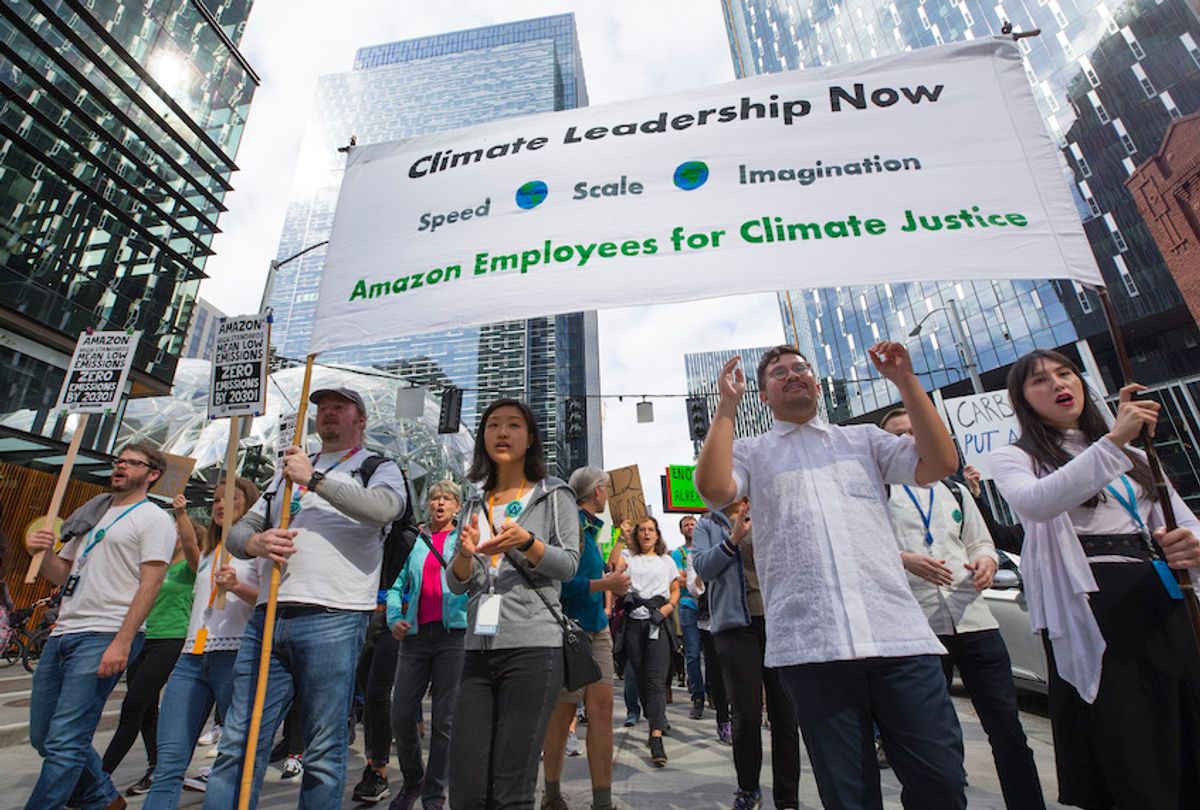 Amazon and other tech employees participate in the Global Climate Strike on September 20, 2019 in Seattle, Washington. (Karen Ducey/Getty Images)
--

It has somehow become sort of normal to use the workplace to protest social issues unrelated to the job itself. This was something almost unheard of even five years ago.

The latest example came on Sept. 20 as more than 1,000 Amazon employees staged a walkout over the retailer’s “inaction” on climate change. In recent months, there has also been unrest among Walmart employees over gun sales and protests by Google and Microsoft workers over military use of their software. And of course, there’s Colin Kaepernick and other professional athletes who used the field — a football player’s office — to protest racialized police violence.

The workplace used to be the very last place you would want to bring attention to social issues, however important. That’s because the office or factory isn’t a democracy where activism is protected. To a workplace scholar like me, what’s really interesting is how employees are increasingly willing to undertake this risky form of protest — and how employers are adapting.

The risks of workplace activism

As a legal matter, there is a big difference between marching in the street — for example, as part of a climate protest — and walking off the job as part of that same protest.

Let’s say you have the day off, and you decide to join a march through the streets. The government can’t just arrest you or banish you to another country. Your activism is protected under the First Amendment.

Those rights fall away the minute you cross the threshold into your job. Unless the government’s your boss, you stop being a citizen and become a worker subject to your employer’s rule. There, you live in something of a “dictatorship, in which bosses govern in ways that are largely unaccountable to those who are governed,” as philosopher Elizabeth Anderson puts it.

You may think calling the office a dictatorship is an exaggeration, but in reality it’s not. Like a real dictatorship, you can be exiled at any moment for virtually any infraction. The vast majority of workers in the United States are employed “at-will,” which literally means you can be terminated at any time, without notice, for any reason or no reason at all.

As a lawyer, I have written countless “at-will” provisions into contracts, and it’s not even strictly necessary. Courts will presume that you are “at-will” unless you present a mountain of evidence showing the employer intended to offer real job security.

If companies can fire you for any reason, that reason might include stirring the pot. And employers tend to respond to social activism the way the “Seinfeld” character George Costanza reacted when his friend Elaine tried to invite his fiance to the opera: by freaking out.

“Everybody knows,” he shouts, “that you gotta keep the worlds apart!”

Work is for work. Save your activism for evenings and weekends.

Lawmakers and courts have long known that employers can abuse their power to fire workers. Over many decades, the law has developed to specify certain circumstances in which employers cannot retaliate against workers.

But the key here is that those exceptions are limited, and the law generally lags several years — or sometimes decades — behind what is happening in the workplace.

The law prohibits employers from firing workers where they are trying to advance or protect other key employment rights — like trying to organize a union or filing a gender discrimination lawsuit. Courts will also protect workers who really had no choice but to act against their employer’s preferences — like when they are summoned for jury duty, or when their boss asks them to engage in illegal conduct.

Even whistleblowers who unearth illegal conduct have to walk a tightrope if they want to keep their jobs. For example, the anonymous national security whistleblower who complained about Trump’s alleged call with the Ukrainian president would have lost legal protection — and faced potential criminal prosecution — if he or she went straight to the press. The whistleblower could maintain protection only by complaining confidentially within authorized government channels.

Activists out on a limb

Whistleblower protections are designed to protect those who disclose important information about misconduct to corporate heads or government authorities. Like a sports referee, true whistleblowers are pointing out a violation that others overlooked. Social activists in the workplace, by contrast, lend their voice to a known cause.

In that sense, social activists are perhaps most closely analogous to employees who object to work assignments on religious grounds — a pharmacist who refuses to fill prescriptions for religious reasons, for example. But those workers are on much firmer legal ground, because Title VII of the Civil Rights Act requires employers to provide some accommodation for workers’ religious beliefs.

By contrast, employers can and do punish workers for activism they consider too disruptive or distracting.

That’s why Walmart apparently shut down network access for the worker who called for the gun-related walkout. It’s why Google issued a new policy, essentially telling workers to focus on their jobs; why U.S. Soccer imposed a ban on kneeling during the national anthem; and why Colin Kaepernick still has no contract.

Perhaps more surprising, though, is the ways in which companies have proved responsive to employee activism. Amazon let workers take vacation time to walk off the job and issued a carbon pledge. Google declined to renew a contract providing artificial intelligence to the military. Even Walmart discontinued some of its ammunition sales and is urging lawmakers to pass gun control legislation.

In a competitive labor market, it’s almost as if allowing employee protest has become a workplace perk of sorts, a special privilege companies selectively dispense for workers — software programmers in particular — who are hard to replace. Tellingly, far fewer store workers at Walmart walked off the job than salaried workers at Amazon’s headquarters. They may have sensed that Walmart would call their bluff.

But like all privileges dispensed by authoritarian rulers, the freedom to protest can be retracted at will. I would not expect it to survive the next downturn.