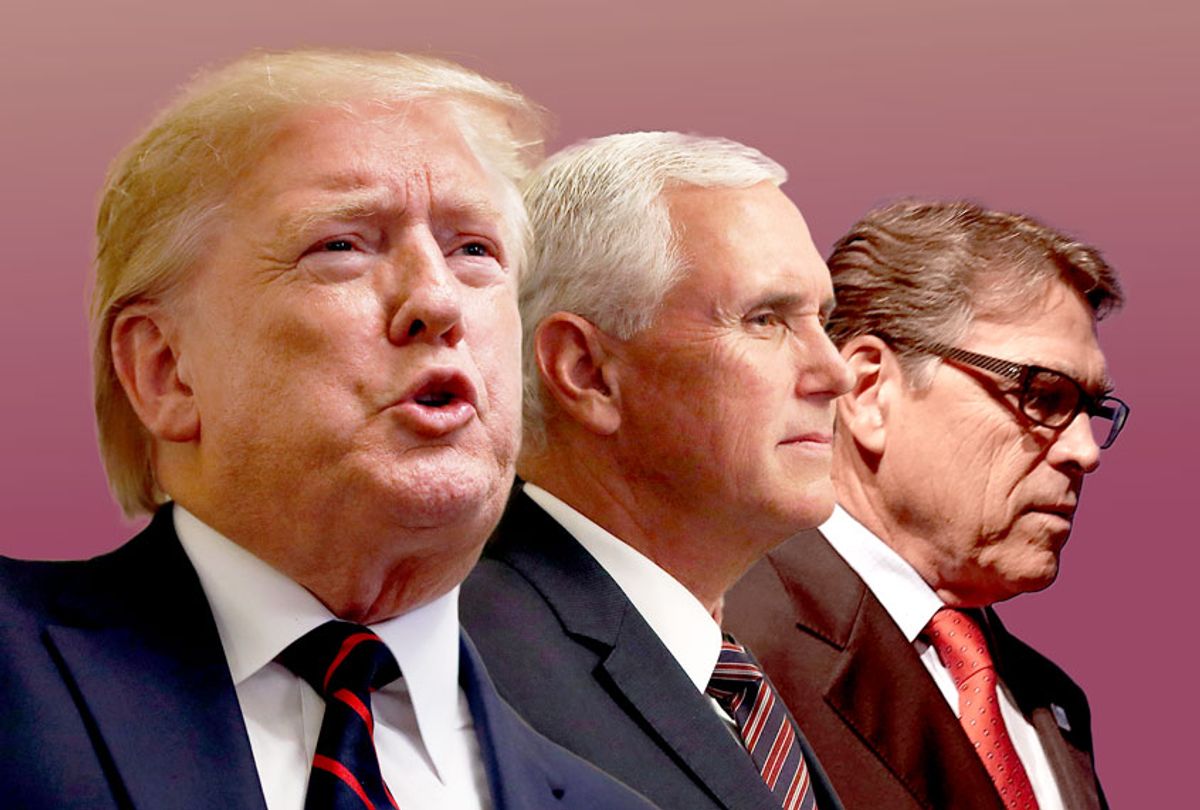 Sen. Bob Menendez, D-N.J., the committee’s ranking member, sent the letters after the whistleblower whose complaint triggered the House impeachment inquiry cited Pence and Perry’s actions as part of the broader effort to “pressure the Ukrainian leadership.”

The whistleblower wrote that Trump “instructed” Pence to cancel a planned trip to Ukraine to attend new president Volodymyr Zelensky’s inauguration in May. Perry “led the delegation instead” and “made clear” to Ukrainian officials that Trump “did not want to meet” with Zelensky until he “saw how Zelensky ‘chose to act’ in office.”

Menendez cited the whistleblower report and Perry’s meetings with Zelensky, Ukraine's prime minister, and the head of parliament in his letter to Perry.

"President Trump's phone call and the allegations in the whistleblower complaint raise serious questions about the messages that were communicated on behalf of President Trump to the government of Ukraine," Menendez wrote.

Menendez included a list of questions seeking information on who requested Perry to lead the Ukrainian delegation, as well as whether Trump or White House aides asked him to convey Trump’s “desire for assistance in investigating one of his political opponents.”

Perry’s role figures into the House impeachment inquiry as well. House Democrats on Monday issued a subpoena seeking any communications the Energy Department may have had regarding Trump’s discussions with Zelensky, Politico reported.

Rep. Jamie Raskin, D-Md., who sits on both the House Oversight and Judiciary committees, told the outlet that Perry will likely have to testify to Congress about his role.

“His Ukraine-related activities have drawn the interest of members and he almost certainly has relevant testimony to offer,” Raskin said. “He seems to have appeared and reappeared multiple times in the Ukrainian context, so he’s likely to have evidence that Congress would consider material.”

Perry, one of the few Trump cabinet member who has avoided serious scandals so far, has visited Ukraine multiple times as energy secretary and helped craft a deal that increased U.S. coal exports to the country. He tweeted a photo of his most recent meeting with Zelensky last month.

Austin Rivers, head of the watchdog group American Oversight, told Politico that Democrats should bring Perry in for questioning.

“It’s possible there’s nothing here but it’s also possible that Rick Perry participated in, knowingly or unknowingly, a pressure campaign to have Ukraine investigate the president’s domestic political opponents,” he said. “If I were Rick Perry or anyone else in the administration, I’d be very careful about being honest right now.”

Menendez also sent a similar letter to Pence. Pence defended Trump’s move to block military aid to Ukraine days before the call to Zelensky, claiming it was held for review due to “issues of corruption,” The New York Times reported. After meeting with Zelensky in Poland on a trip Trump skipped, Pence told reporters that to invest more U.S. money in Ukraine, “the president wants to be assured that those resources are truly making their way to the kind of investments that will contribute to security and stability in Ukraine.”

Menendez questioned whether Pence was actually in Poland in order to pressure Zelensky to investigate Biden.

"You met with President Zelensky in Warsaw, Poland. When asked by a reporter on that trip whether you could ‘assure Ukraine that the hold-up of that money has absolutely nothing to do with efforts, including by Rudy Giuliani, to try to dig up dirt on the Biden family,’ you did not answer the question,” Menendez wrote. “As the summary of the call with President Zelensky demonstrates, President Trump requested a foreign government help investigate his domestic political opponent. While I hope that he was alone in making such an inappropriate request, your statements regarding your discussions with Ukraine officials raise questions whether you may have helped carry that message.”