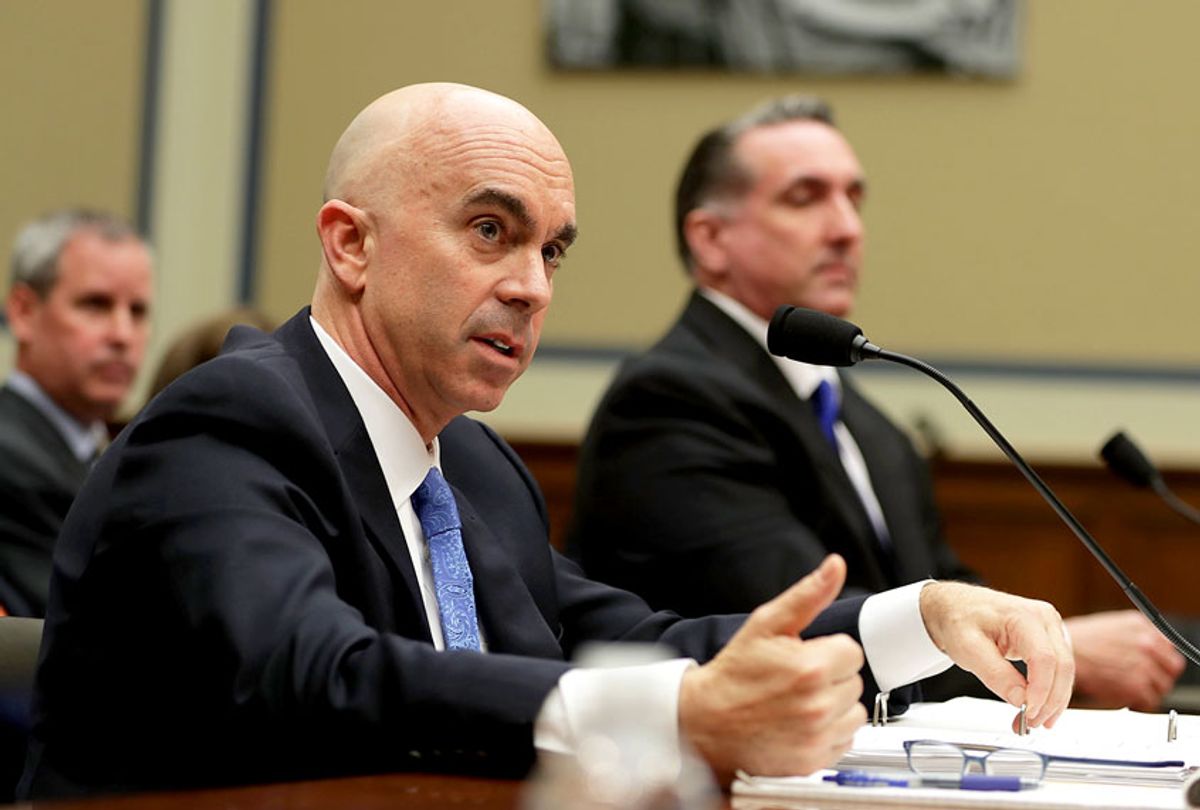 U.S. State Department Inspector General Steve Linick (L) and I. Charles McCullough III (R), inspector general of the intelligence community, testify during a hearing before House Oversight and Government Reform Committee July 7, 2016 on Capitol Hill in Washington, DC. The committee held a hearing "Oversight of the State Department," focusing on the FBI's recommendation not to prosecute Democratic presidential candidate Hillary Clinton for maintaining a private email server during her time as Secretary of State. (Alex Wong/Getty Images)
--

The State Department's inspector general is expected to give lawmakers an urgent "briefing" Wednesday amid a standoff between Secretary of State Mike Pompeo and House Democrats over President Donald Trump's communications with Ukraine, which is now at the center of an impeachment inquiry.

The briefing was requested by Steve Linick, the inspector general at State, according to ABC News. He is expected to meet with congressional staffers in a secure location on Capitol Hill.

The briefing is likely to concern a recent intelligence community whistleblower's report which describes, in part, the State Department's role in coordinating communications between Rudy Giuliani, the president's personal attorney, and Ukrainian officials.

The inspector general serves as an internal investigator and watchdog, and his office generally operates independently of the department.

"The fact that [Inspector General Steve Linick] is bringing documents — that means that something is in those documents that he thinks it’s really important that the people who are doing this impeachment inquiry see immediately," former Sen. Claire McCaskill, D-Mo., told MSNBC's Lawrence O’Donnell on Tuesday. "So it will be very interesting to see what we find out tomorrow. But this is very unusual for an inspector general to do this. I worked with a lot of inspectors general. I did a lot of legislation, ironically with Chuck Grassley, on whistleblowers and inspectors general. And for an inspector general to step up like this — because typically they want to go through protocol and procedures — means something big is up."

The State Department has come under mounting scrutiny in recent weeks for allegedly connecting Giuliani to multiple Ukrainian officials about launching or reopening an investigation into former Vice President Joe Biden and his son, Hunter.

Giuliani has admitted he met with Ukrainian officials, but said he did so at the direction of the State Department. He has further claimed that he shared all of the details of his conversations with the agency and has a "nice little trail" of text message conversations with the U.S. special envoy to Ukraine, Kurt Volker, to back up his statements.

Earlier on Wednesday, Secretary of State Mike Pompeo admitted that he listened to the controversial call between Trump and Ukrainian President Volodymyr Zelensky.

"I was on the phone call," Pompeo said during a news conference alongside Italian Foreign Minister Luigi Di Maio.

"I know precisely what the American policy is with respect to Ukraine," Pompeo added. "It's been remarkably consistent, and we will continue to try to drive those sets of outcomes."

The secretary of state's comments came a day after he pushed back against a request from the House Intelligence, House Foreign Affairs and House Oversight and Reform Committees to schedule the depositions of five State Department officials as part of their inquiry. Pompeo accused the committees chairmen of trying to "intimidate, bully and treat improperly" those officials.

"I am concerned with aspects of your request . . . that can be understood only as an attempt to intimidate, bully and treat improperly the distinguished professionals of the Department of State, including several career Foreign Service Officers, whom the committee is now targeting," Pompeo wrote in a letter to House Foreign Affairs Chairman Eliot Engel, D-N.Y.

Support for an impeachment inquiry swelled in the House of Representatives amid reports that a whistleblower complaint being withheld by the administration last month centered around Trump's actions toward Ukraine, including pressuring Zelensky to investigate former Vice President Joe Biden, whose son Hunter worked for a Ukrainian gas company that was under investigation.

There is no evidence that either Biden committed any wrongdoing, but Trump and his personal lawyer, Rudy Giuliani, have pointed to the fact the former vice president pushed to oust Shokin at a time when Hunter sat on the board of the Ukrainian company as a major scandal.

Pompeo's refusal came amid tweets from Trump, including one questioning why he is not "entitled to interview & learn everything about" the whistleblower whose name and gender have not been publicly released and is protected by federal statute.

House Intelligence Committee Chairman Adam Schiff on Wednesday warned the White House that stonewalling could result in an additional article of impeachment on obstruction of justice.

"We're not fooling around here," Schiff said as he appeared at a news conference on Capitol Hill with House Speaker Nancy Pelosi, D-Calif.

Trump was tweeting amid the lawmakers joint news conference. He renewed his call for Schiff to resign and attacked Democrats more broadly as "Do Nothing Democrats."

"Congressman Schiff should resign for the Crime of, after reading a transcript of my conversation with the President of Ukraine (it was perfect), fraudulently fabricating a statement of the President of the United States and reading it to Congress, as though mine! He is sick!" Trump tweeted, referring to Schiff's description of Trump's phone call with Zelensky last week that the lawmaker said was meant as a parody.

Trump is set to appear at a news conference of his own Wednesday afternoon.

On Wednesday morning, House Oversight Committee Chairman Elijah Cummings, D-Md., said the White House's "flagrant disregard of multiple voluntary requests for documents — combined with stark and urgent warnings from the Inspector General about the gravity of these allegations" has left House Democrats with "no choice" but to subpoena the administration for documents in its impeachment inquiry focused on Ukraine.

The subpoena will be issued Friday, per Cummings's memo. It requests documents that the panel first requested on Sept. 9.