Yes, it's this bad: Conspiracy-hunter Bill Barr is roaming the globe under Trump's orders

Remember when Trump's AG had a reputation for rectitude? Now he's traveling the world hunting for loose nuts 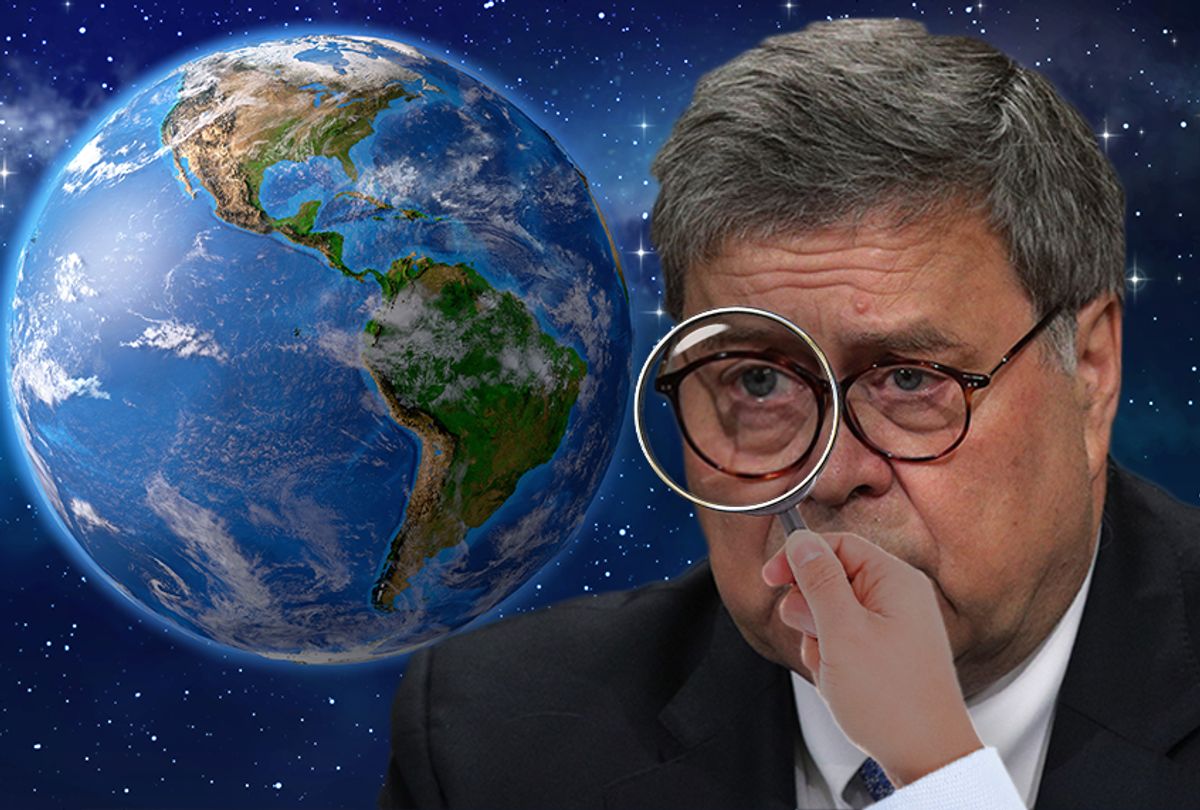 Now that the House of Representatives has officially begun an impeachment inquiry, recollections of the other two impeachment proceedings in recent years inevitably come to mind. Bill Clinton's impeachment was just 20 years ago so most people over the age of 35 or so have a good recollection of how that went. Those of us who are older remember Watergate, which is much more analogous to what we're seeing now than the farce of the Ken Starr investigation and the absurd, prurient charges leveled against Clinton. Watergate was very serious business, exposing corruption on a scale never seen before.

The Trump scandals are equally serious but of a different nature. Trump himself is clearly unfit for the office, both psychologically and intellectually, in ways that are very different from Richard Nixon, who, for all his faults — and they were legion — was an intelligent man who understood government and his role in the world. Paranoia, resentment and a deep desire for vengeance are the main things the two men have in common, and those are terrible attributes in a world leader.

They also both share an affinity for a certain kind of accomplice who is willing to take great risks in service of their leader. Nixon had a few, but none were as personally powerful as his attorney general, John Mitchell, who spent 19 months in jail for his role as presidential campaign chairman and his subsequent perjury and obstruction of justice.

After Mitchell's downfall, the Department of Justice suffered a huge loss of trust among the American people. It took years to repair the damage. Subsequent attorneys general went to some lengths to assure the public of their independence, despite their political affiliations. Some dealt with the inherent tension in that role better than others but even the most political of AGs since Mitchell have recused themselves from blatant partisan activity. Most recently, of course, that would be former Attorney General Jeff Sessions, who correctly recused himself from an investigation into Russian interference in the 2016 campaign since he had been a member of the Trump team.

We all know how the president felt about that. He publicly harangued and humiliated Sessions for months, trying to get him to quit. I don't think anyone knows why he hung on so long, but Sessions did the country a service considering what's happened with his replacement.

We should have known what we were getting with William Barr. His last stint as attorney general was most noted for advising President George H.W. Bush to pardon all the Iran-Contra scandal participants and attempting to use the U.S. attorney in Arkansas to hunt up damaging information about then-candidate Bill Clinton. But for some reason, Barr's affiliation with Bush was seen as a sign of his rectitude, so he was easily confirmed. At the moment he's making a run for John Mitchell's place in history as the most nakedly partisan attorney general the United States has ever had.

Just as Trump is different than Nixon while sharing the same corrupt and venal character, so too Barr is different from Mitchell while sharing a similarly arrogant belief that he can openly engage in political activity for the benefit of his boss. In this case, the activity has international consequences. Rather than just using domestic tools to go after the president's enemies, Barr has decided to engage foreign governments, with the president using his massive power to coerce them into helping to assuage Trump's insecurity that he wasn't legitimately elected — and to help him wreak revenge on those who had the gall to investigate him.

Barr has bought into an obscure, right-wing conspiracy theory that can't easily be explained because it really doesn't make any sense. It has tentacles all over the world, competing narratives, absurd coincidences and obvious contradictions. It was designed by various actors in an attempt to exonerate Russia, Paul Manafort, Donald Trump and various others. Somehow, Joe Biden and his son Hunter have gotten mixed up in all of it. (For an explanation of what Barr and Trump are chasing, this recent article by Philip Bump in the Washington Post and this in-depth analysis by Marcy Wheeler are good places to start.)

Once you blow away all the detritus, what's left is simply that Trump wants to prove that Russia didn't interfere in the election on his behalf: Instead, he would like us to believe, Ukraine interfered on behalf of Hillary Clinton (more or less). The Department of Justice put out a statement declaring that, for its part, it doesn't question the validity of the Russian interference — which is a good thing, since it has indicted a whole bunch of Russians for their involvement. Rather, DOJ is merely looking into whether or not the intelligence community had a righteous predicate for opening an investigation of Donald Trump's campaign. By the way, Barr's troops are also looking to prove that the Mueller investigation itself was a fraud — Robert Mueller's team must have been in on the whole thing or they could not have produced such a report.

That, of course, is nonsense. Mueller's report outlined in great detail why the FBI and the Intelligence community was alarmed by the Russian interference and why it was imperative that they investigate whether or not Russian agents had penetrated the Trump campaign. Trump wants to prove that all that was a set-up from the beginning, and Barr seems to have bought into the idea, following the crackpots and con artists who have been squawking from the fringe about all this for months. Honestly, this should not surprise us — before Barr became attorney general he had weighed in the so-called Uranium One scandal that had been flogged relentlessly on Fox News.

Barr has been pushing the president to call foreign leaders to help with his "investigation of the investigation" and has personally traveled to world capitals to get to the bottom of this, as if it were a real thing. Right now he's in Rome, reportedly to listen to a recording of a fringe player named Joseph Mifsud, an academic of Maltese origin who was allegedly responsible for telling former Trump campaign staffer George Papadopoulos that the Russian government had "dirt" on Hillary Clinton, and who then disappeared. The right-wing fever swamps believe Mifsud was actually a CIA asset setting up the Trump campaign who was then forced into hiding.

Think about that for a moment. The attorney general of the United States is personally chasing shadows and phantoms around the world to try to prove that the CIA secretly tried to sabotage the campaign of the current president of the United States. Yet somehow the spooks kept it all under wraps until after the election, at which point they launched an investigation to cripple him. Why they would have done all this is unclear. It's not as if the intelligence agencies haven't worked for Republicans before.

But this baroque, paranoid fantasy has overtaken the White House, the Justice Department and the Republican Party and it's rapidly hurtling out of control. It's going to be up to the Congress and ultimately the voters to re-center our government in the real world. That will not be easy.