Fox host asks Corey Lewandowski if he is drunk on air: “Did you have a little merlot with dinner?"

“You sound a little slurry,” Kennedy said as she remarked how the manager had trouble enunciating 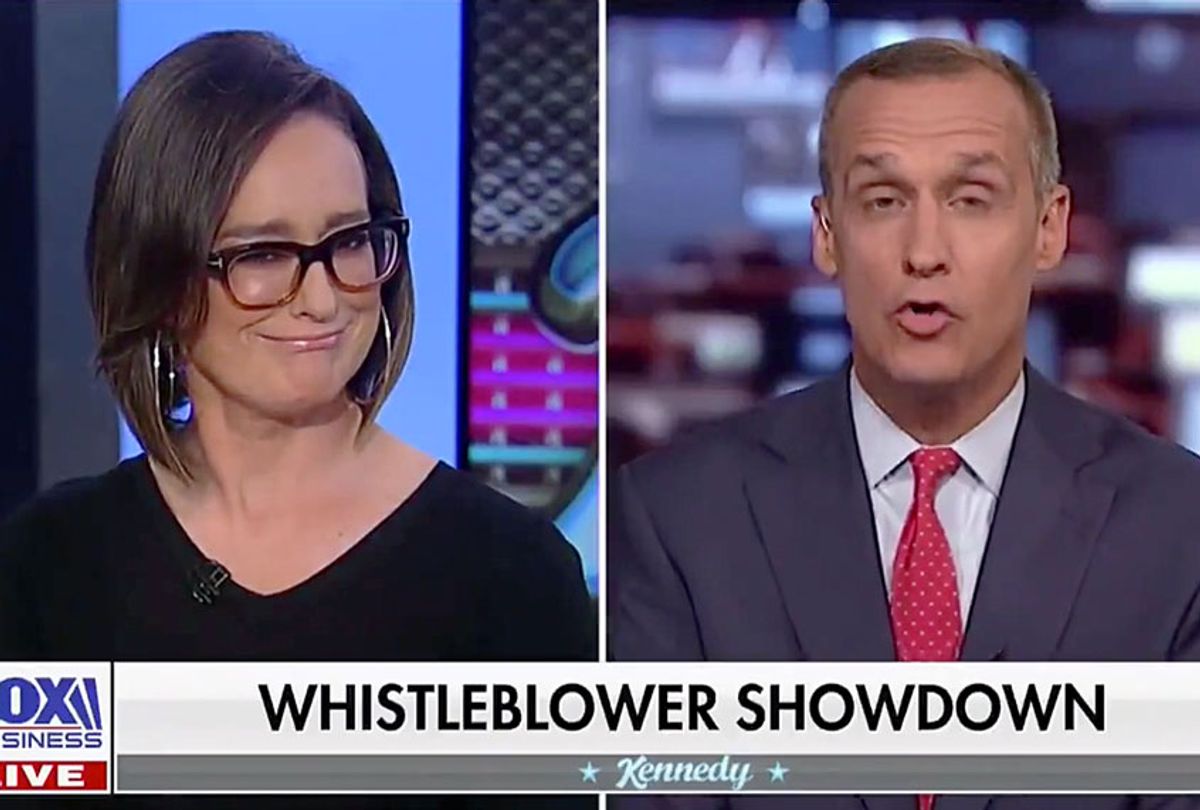 Fox Business Network host Kennedy asked former Donald Trump campaign manager Corey Lewandowski if he had been drinking as the political operative appeared to slur his words during their Wednesday night interview.

The viral exchange began as Kennedy wondered how Rep. Jerry Nadler, D-N.Y., who she called the former “face of impeachment,” had seemingly been replaced as “the grownup in the room” by Rep. Adam Schiff, D-N.Y, who she described as “an emotional child.”

“And we’re hearing that the whistleblower contacted Schiff’s staff before he or she filed the complaint,” Kennedy said.

“Well, what we know is this is: 'Little' Adam Schiff — who is the chairman of the House Intelligence Committee — already knew about the whistleblower complaint,” Lewandowski responded to Kennedy. “And what we know is that the rules of the whistleblower complaint had changed in August of this year, which said you no longer have to have first-hand knowledge of what’s going on.”

The former Trump campaign manager went on to speculate that the whistleblower could have been close to John Brennan, the former director of the CIA and that the individual “hates this president more than they love their country.”

While championing Lewandowski’s sentiments, Kennedy asked, “Did you have a little merlot with dinner?”

“No,” Lewandowski replied. “Should I have?”

Kennedy nevertheless affirmed that she “love(s) this country so much that I would like to hug it ‘til it squeaks” before taking a sip from her coffee mug and suggesting that Lewandowski may “need a cup of coffee" himself.

Lewandowski’s assertion about the supposed changes in whistleblower complaint regulations was inaccurate. Michael Atkinson, the intelligence community’s inspector general and a Trump appointee, offered a rare statement addressing the unfounded rumor after it was first reported by the far-right site The Federalist.

"In fact," Atkinson explained, "by law the complainant . . . need not possess first-hand information in order to file a complaint or information with respect to an urgent concern. The (intelligence community inspector general) cannot add conditions to the filing of an urgent concern that do not exist in law."

On Wednesday, Trump seized on a New York Times story about Schiff being informed of the “outlines” of the whistleblower’s concern days before the complaint was formally filed to make an unsubstantiated claim. Standing next to Finnish President Sauli Niinistö, Trump said that "I think it's a scandal that he knew before. I'd go a step forward — I think he probably helped write it. OK? That's what the word is."

This is not the first time that Lewandowski sparked controversy from an on-air appearance. Last year, he aroused anger after he mocked a 10-year-old migrant girl with Down Syndrome who had been taken from her mother and put in a cage. Lewandowski dismissed the humanitarian concerns regarding Trump’s family separation policy by saying, “When you cross the border illegally, you have torn up the rights of this country."

More recently, Lewandowski admitted to the House Judiciary Committee in its first official impeachment hearing that he lied to MSNBC host Ari Melber about not remembering if Trump had ever asked him to “get involved” with then-Attorney General Jeff Sessions or the Department of Justice. Lewandowski, who is mulling mounting a run for a U.S. Senate seat in New Hampshire, told the committee last month that “I have no obligation to be honest with the media, because they are just as dishonest as anybody else."

You can watch Lewandowski's exchange with Kennedy here: