"Band in China" makes valid points about the industry bending to suit China's government, but the jokes don't land 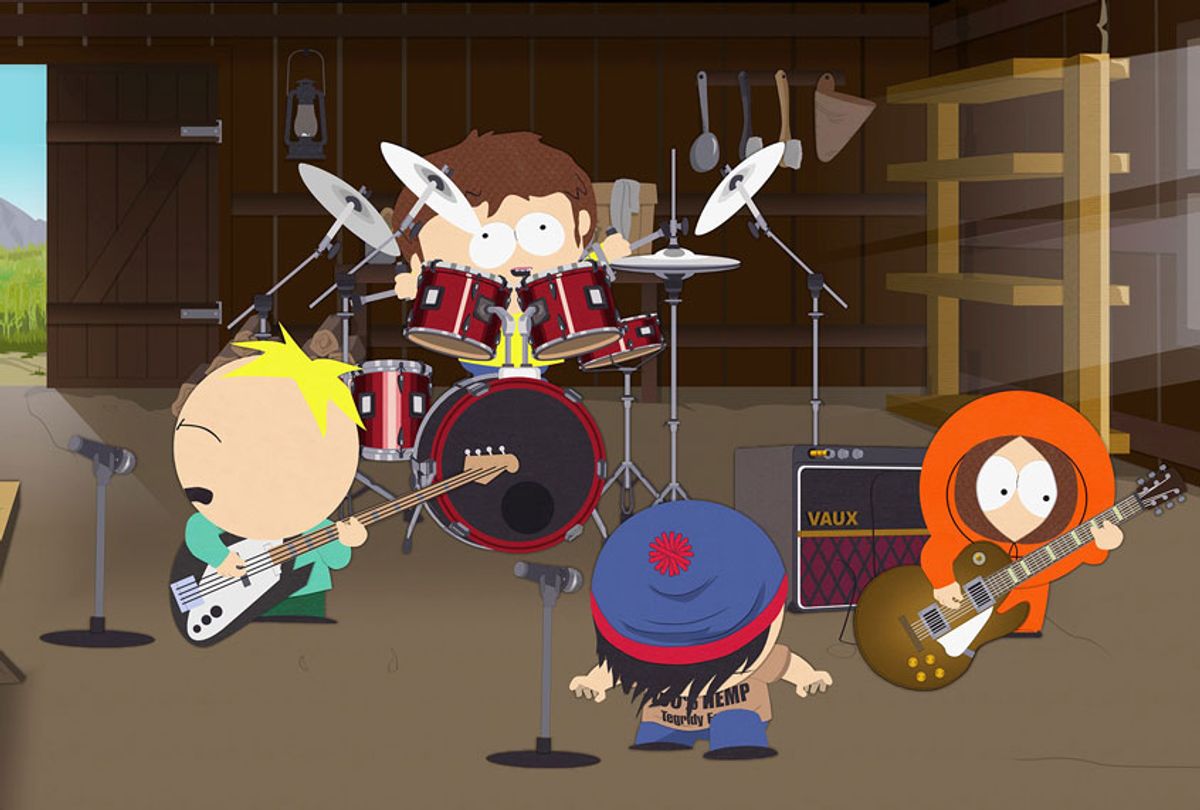 The "South Park" episode "Band in China" makes a pretty strong argument about the danger that Chinese censorship poses to American artistic freedom. It works quite well as an editorial; the problem is that it isn't particularly funny. And that's a shame, because "South Park" often reaches its comical high points when it has righteous outrage in its heart.

If "Band in China" manages to raise awareness about China's increasing control over American art, then I suppose its impact will be salutary. Then again, because it isn't especially funny or memorable, the odds are that it will fade into obscurity and not do much good or ill of any kind.

"Band in China" starts with Randy Marsh (Trey Parker) deciding to go to China after realizing that he can get rich by selling the marijuana from his Tegridy Farms to the 1.4 billion people who live there. He is promptly arrested when he lands, of course, but the episode doesn't spend too much time lingering on his inevitably bleak stay in a Chinese prison. Its focus is on how other American businesses like Google, the NBA and Disney (especially Disney) have the same idea as Randy — to make billions by opening themselves up to the lucrative Chinese marketplace — and are willing to bend themselves to the demands of the Chinese government in order to do so.

The B plot reinforces this point (a refreshing departure from last week's episode "Mexican Joker," which had two storylines that were basically unrelated to each other). When Stan (Parker), Butters (Matt Stone), Jimmy (Parker) and Kenny (Stone) form a successful death metal band, they are recruited by a Hollywood agent who wants to turn their story into a biopic. Their excitement turns to dismay, however, as they learn about the lengthy list of topics they are forbidden to cover because the Chinese government would disapprove of them: The Dalai Lama, organ transplants (referencing accusations that China is harvesting organs from Uighur Muslims and the Falun Gong), homosexuality (Chinese censors have long targeted pro-gay rights material) and Winnie the Pooh.

That last thread receives the most attention, with Parker and Stone clearly getting a kick out of the fact that last year's film "Christopher Robin" was banned from the country after memes circulated saying that President Xi Jinping looks like Winnie the Pooh. While I won't delve into spoilers, the episode climaxes with one character currying favor with the Chinese government by addressing their dislike of Winnie the Pooh in the deliberately graphic and shocking fashion that has become a hallmark of the "South Park" brand of comedy. The problem is that the joke, like so many others in the episode, simply doesn't land.

Humor is a subjective thing, of course, and it's difficult to quantify exactly why certain material works and other does not. The most brilliant "South Park" moments have occurred when the series creators find inspired ways to make their larger points about society: A group of religious Christians unwittingly chanting Nazi slogans while supporting "The Passion of the Christ" in 2004's "The Passion of the Jew," the ludicrous scripture of Scientology being matter-of-factly explained and animated in 2005's "Trapped in the Closet," a smug global warming denier casually altering his rationalizations for opposing climate activism (as manifested by the character Manbearpig) before meeting a grisly fate in 2018's "Time To Get Cereal." These moments were effective not only because "South Park" had valid points to make, but because the show came up with a creative and memorably humorous way of making it.

This isn't to say that "Band in China" doesn't find ways of illustrating how hard American corporations will pander to China. Iconic Disney characters — from The Beast and Buzz Lightyear to Kylo Ren and Thor and Captain Marvel — are all seen trying to gain access to China's markets. At one point Stan is working on the screenplay for his band's biopic while a Chinese censor is literally looking over his shoulder. Characters make blunt proclamations about the harsh reality of the entertainment industry's desire to do business in China, from Randy saying that "you have to lower your ideals of freedom if you want to suck on the warm teat of China" to Stan declaring that "anyone who would betray their ideals just to make money in China isn't worth a lick of spit." The episode even takes a potshot at liberals when a character explains that the PC Babies (an in-show band meant to satirize political correctness), despite seemingly complaining about everything, doesn't object to Chinese control of American art. The end result is an episode that feels more like a lecture from Parker and Stone to their entertainment industry brethren than an attempt at making ordinary Americans laugh and think at the same time.