Walter White may have gotten all the glory, but Jesse was with him most of the way. Here's a primer of his journey 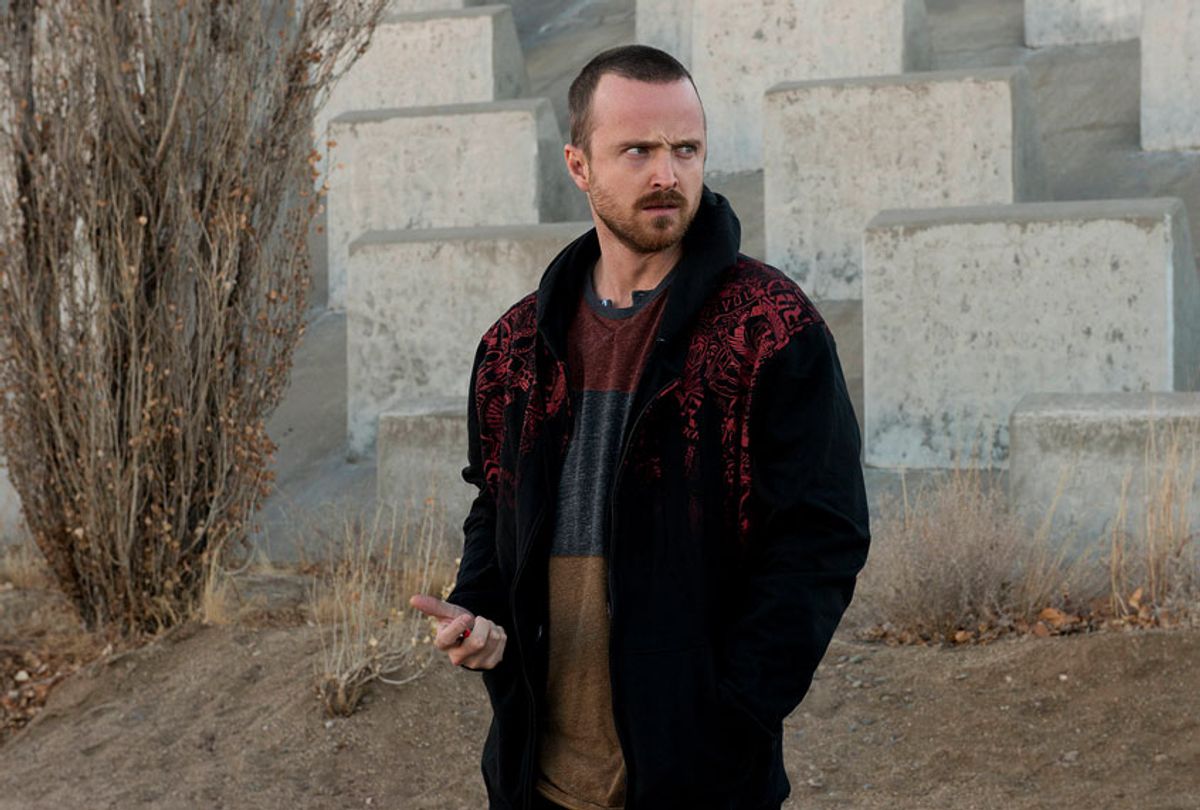 The last time “Breaking Bad” viewers saw Jesse Pinkman (Aaron Paul), he was driving out of a white supremacist compound and leaving his longtime meth-making partner Walter White (Bryan Cranston) in his wake. He was finally free, crying with joy as he made his escape.

This is the exact point where “El Camino,” the new “Breaking Bad” movie that premieres on Netflix later this month, picks back up. We’ll watch as Jesse flees both his captors and law enforcement and attempts to make some kind of life for himself.

But a lot led up to this moment. Jesse transformed from a high school burnout to a hardened meth cook and dealer, a transformation propelled by a series of manipulations and tragedies. In interviews, show creator Vince Gilligan has said watching “Breaking Bad” — and its spin-off “Better Call Saul” — aren’t totally necessary to understand “El Camino,” but if you want the full picture of who Jesse Pinkman is – more than his ability to punctuate his sentences with "bitch" – maybe give some of these pivotal episodes a rewatch before Oct. 11.

To fully understand where Jesse is at the start of “El Camino,” it’s essential to see where he came from. The first episode of “Breaking Bad” introduces us to Walter White, a high school chemistry teacher who, after being diagnosed with terminal lung cancer and given roughly two years to live, realizes he wants to do whatever he needs to provide for his family after his death.

After doing a ride-along with his brother-in-law Hank (Dean Norris), a DEA agent, and witnessing a drug bust, it becomes clear how he wants to accomplish that. While the officers swarm the drug house, Walter notices his former student, Jesse, escaping out a second-story window.

Eventually, Walt coerces Jesse into helping him cook crystal meth. Here we establish some of the most iconic images from the show — the rusty RV in the New Mexico desert, Walter White in a green button down and his tighty-whities — as well as the driving force for the rest of the series: money.

This episode is a one-two emotional punch. Walt has to announce to his extended family that he has cancer. His pregnant wife, Skyler (Anna Gunn), is pressuring him to see a top oncologist who is incredibly expensive. This is when his lies to her really take off; he says he’ll borrow from his pension to pay for treatments, but is actually dipping into his drug money (which is currently hidden in an AC vent).

Meanwhile, DEA pressure is increasing as agents, including Hank, realize that there is a new operation on the streets. To escape the heat — and his own drug-induced paranoia — Jesse goes back to his parents’ house. This episode features a real look into the home he came from: suburban, upper middle-class, two-parent.

“Do we let him stay?” his mother asks upon his arrival. His dad agrees, but only if they “lay down the law this time.” They want Jesse to attend AA meetings, and worry about his potential influence on their younger son, Jake.

Jesse spends a little time in Jake’s room, looking at his trophies and Mathlete awards. Their mom comes to check on them, but conspicuously leaves the door open as she leaves. "Can't let the scumbag warp the mind of our favorite son," says Jesse, to which Jake replies, "I'm the favorite? You're practically all they ever talk about."

This is the episode where we meet breakout character (and my personal favorite) Saul Goodman (Bob Odenkirk), a criminal-minded lawyer who has underworld contacts and an office in a strip mall. Equal parts lovable and seedy, he becomes Jesse and Walt’s attorney. His first task? To keep Jesse’s burn-out friend Badger — who will appear in “El Camino” — from informing on the pair.

This episode marks a real turn for Walter. Jesse has been dating his neighbor Jane (a pre-"Jessica Jones" Krysten Ritter), and the two have been using heroin together. He and Walter are on the outs and Jane has been aggressively pressuring Walter to give Jesse his share of their drug money,  $480,000.

Walt is angry at Jesse, but he also worries about his escalating drug use. He feels compelled to go back to Jesse’s home to check on him and the shocking and horrifying events that follow sparks emotions that will carry through the rest of the series — namely Jesse’s guilt and feelings of desperation — as well as Jesse’s attempts to get clean.

In “One Minute,” a simmering feud between Jesse and Hank finally boils over. Hank believes Jesse  tricked him into believing that his wife was in an accident, so he seeks him out and absolutely beats him senseless. “Who are you working with?” he screams. “You had my wife’s name!”

But before Jesse can answer, he’s knocked unconscious.

When Jesse finally awakes in the hospital, Saul is there taking a picture of his swollen, bruised face.  “That's your 'Get-Outta-Jail-Free' card!” he says. Meanwhile, Walt is trying to make things work with Gale — his assistant at the professional drug lab that kingpin Gustavo Fring (Giancarlo Esposito) has set up for him — but there’s a fair amount of tension. He finally requests Gustavo allow him to bring Jesse in as a replacement assistant.

But when he approaches Jesse with this idea, he’s treated to a shocking monologue in which Jesse announces he’s "lost everything" since working with the "great Heisenberg."

At this point, you’ve been introduced to most of the major players in “Breaking Bad” — so I’d skip ahead to the end of season 4 and watch the satisfying and bizarre death of one of the series' most chilling characters.

But this episode also brings a heart-breaking revelation for Jesse, who had been tricked by Walt into believing that Gus had killed Brock (Ian Posada), the child of Jesse’s ex-girlfriend. The truth just highlights the extent that Jesse has been manipulated and deceived by Walt all along.

After watching the heartless murder of an innocent boy at the hands of Todd (Jesse Plemons), Jesse is shaken. When Todd just brushes off the tragedy, Jesse punches him in the face and swears off the meth business for good. That is until a new offer comes in for their product.

He ultimately spends a portion of the episode at an incredibly awkward family meal with Walt and Skyler, in which he genuinely tries his hand at casual small talk. His topic of choice? Frozen meals.

“I mean, the pictures are usually so awesome, you know?” he says, gesturing in Skyler’s direction. “It’s like, hell yeah I’m stoked for this lasagna! And then you nuke it, and the cheese gets all scabby on top… and it’s like you’re eating a scab. And seriously, like, what’s that all about?”

Skyler isn’t amused, and ultimately leaves the table — which is when Walt takes an opportunity to guilt trip Jesse back into the business, by saying that his family is in shambles and his health is deteriorating; he doesn’t have anything left but meth production. For Walt to continue, he needs Jesse.

This is how Jesse gets pulled back in, which fast-tracks much of the drama that propels the fifth and final season.

Hank has been killed and Jesse is being held captive — both events at the hands of the Aryan Brotherhood gang to which Todd belongs. Meanwhile, Walt’s cancer is back and he is in “finish this life right” mode; he feverishly ensures that his family will be provided for after his death and then proceeds to the compound where Jesse is imprisoned and being forced to cook meth.

At this point, spoilers could be forgiven since the finale aired six years ago, but to preserve the experience for those who haven't seen the episode or may have forgotten every exact beat, let's just say there are several violent surprises and that Walt and Jesse eventually come to an understanding. They bid each other farewell, and Jesse escapes in Todd’s El Camino, as police begin to swarm to property, which leads to ...

"El Camino: A Breaking Bad Movie" will be released on Friday, Oct. 11 on Netflix.