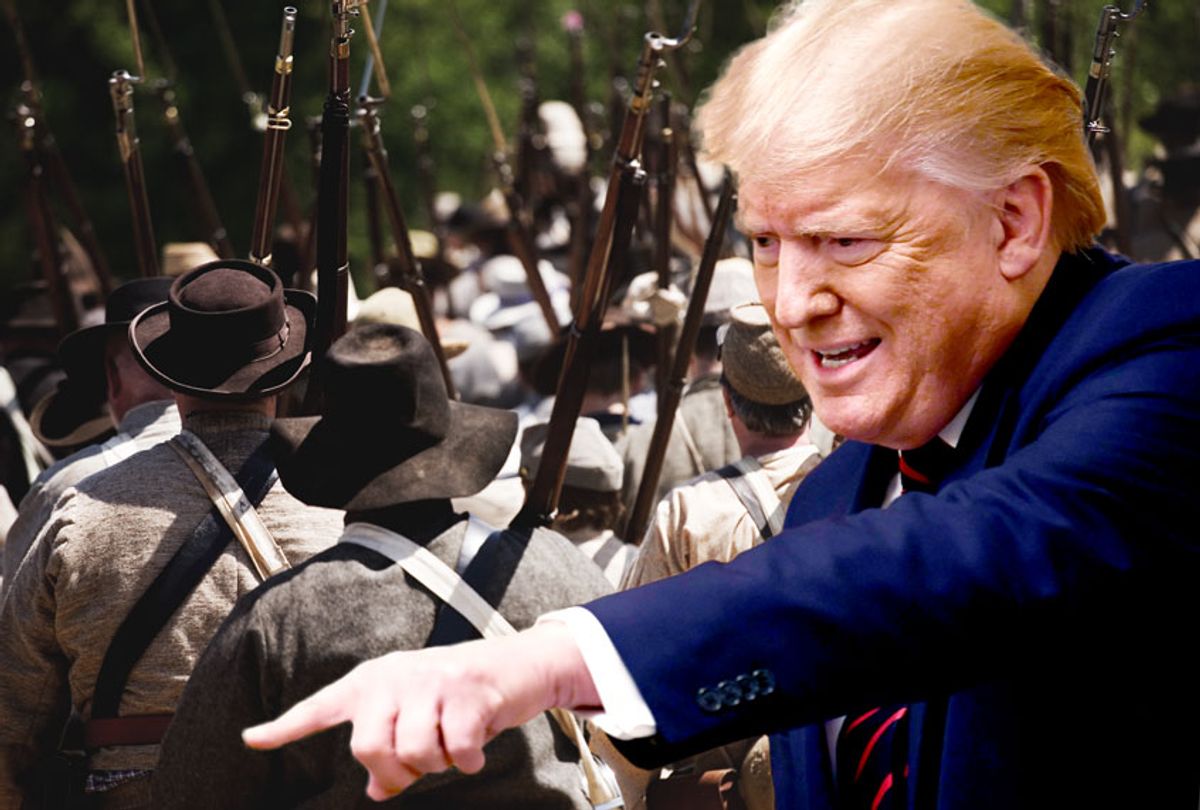 President Donald Trump told aides last year that he wanted U.S. border forces to be armed with bayonets to block people from crossing into the United States from Mexico, The Washington Post reported Thursday morning.

Trump also suggested fortifying a border wall with a water-filled trench, or a moat, that could be stocked with snakes or alligators, the officials said, according to the newspaper. Those ideas, along with the bayonets, were reportedly not taken especially seriously by White House aides.

The New York Times first reported Tuesday on Trump's proposal for a moat filled with dangerous reptiles. Trump reportedly wanted the wall "electrified" with "spikes on top that could piece human flesh," the newspaper noted. He also allegedly suggested that soldiers shoot migrants in the legs to slow them down.

In addition to his proposed alligator-filed border moat, Trump allegedly wanted to form a "human wall" of U.S. forces to prevent migrants from setting foot on U.S. soil, where they would be eligible to seek asylum.

Those proposals were reportedly not acted upon, and Trump denied the media reports in a tweet Thursday. "Now the press is trying to sell the fact that I wanted a Moat stuffed with alligators and snakes, with an electrified fence and sharp spikes on top, at our Southern Border," he wrote." I may be tough on Border Security, but not that tough. The press has gone Crazy. Fake News!"

Deputy White House press secretary Hogan Gidley declined to comment on the president's reported suggestions to The Washington Post, stating that "there have been so many wild, inaccurate and offensive fake news characterizations" of the president's immigration policies.

Trump has made immigration and border security a key issue of his first presidential campaign and of his White House tenure.

After he clinched the presidency, arrests along the border plunged to their lowest levels since 1971, but migration levels dramatically increased soon after. The arrival of several migrant and refugee caravans making their way to the nation's southern border in 2018 drew the ire of  Trump, who has introduced many laws to crack down on legal and illegal immigration.

Trump requested U.S. soldiers to paint a mile-long stretch of border fencing in California's Imperial Valley this summer in order to boost its "aesthetic appearance," at a cost of $1 million. He wanted the border barriers painted black and topped with sharp spikes. The president has argued that the black paint absorbs heat and would make the barrier hot to touch.

He has also spoken favorably of the "anti-climb" steel panels atop the barriers, which he claimed would be so strong that no human could scale it, not even a "world-class mountain climbers." He said the structure had been tested by 20 skilled mountain climbers.

"We had 20 mountain climbers," Trump told reporters in California last month. "That's all they do. They love to climb mountains. They can have it. Me, I don't want to climb mountains, but they're very good. Some of them are champions. And we gave them different prototypes of walls and this one was hardest to climb."