Down the rabbit hole with all the president's men: Barr and Pompeo go hunting

Bill Barr and Mike Pompeo went to Rome looking for conspiracy fodder. They might have dug up more than they wanted 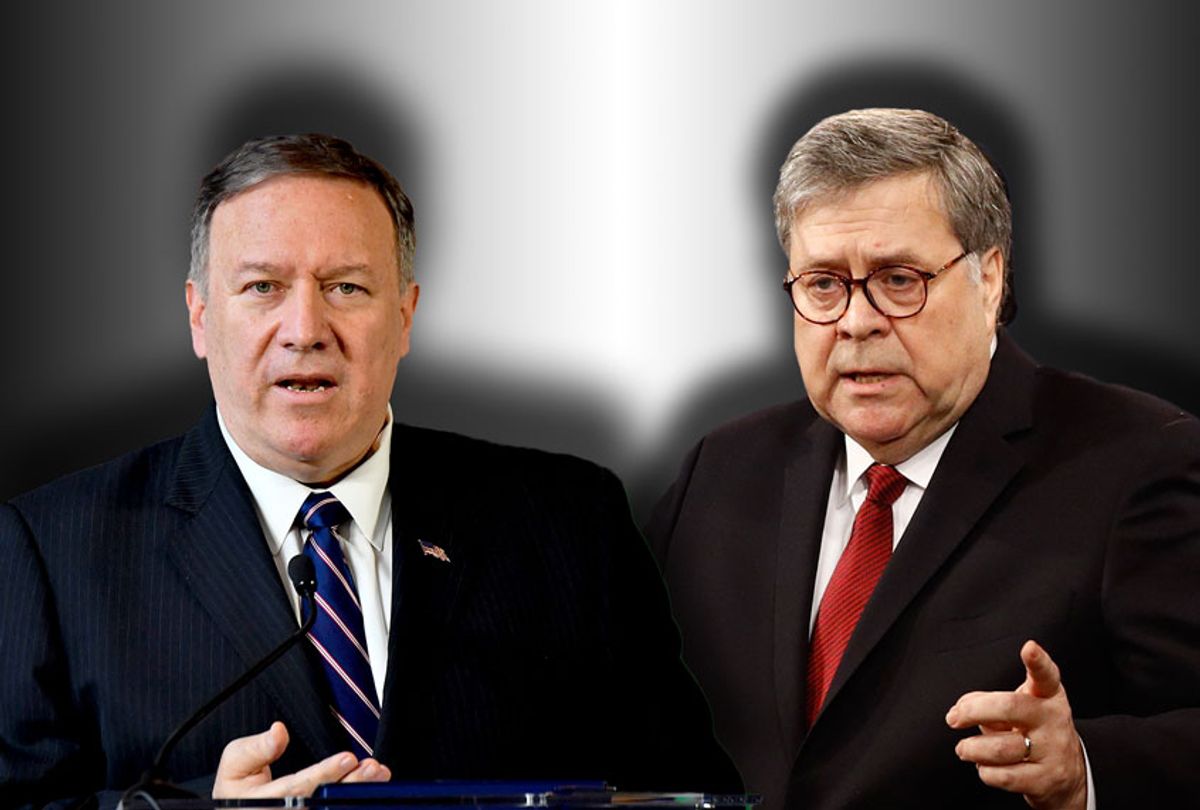 Donald Trump won the 2016 presidential election. OK, he lost the popular vote and gained the electoral votes in the three hotly contested states of Pennsylvania, Michigan and Wisconsin by a grand total of 70,000 votes. But it’s indisputable that he was inaugurated on Jan. 20, 2017, and has been president of the United States ever since.

The way he won that election was investigated for two years by a crack team of lawyers working for special counsel Robert Mueller, and Trump won that battle, too. Mueller was unable to find any evidence that Trump and his campaign coordinated with the 25 Russians he indicted for interfering with the election, and although he found that Trump may have sought to obstruct his investigation, Mueller did not indict him. The hand-picked Roy Cohn Trump appointed to run his Department of Justice completely exonerated him in a four-page letter he released on March 24 of this year.

Democrats were squabbling amongst themselves about whether to impeach Trump for various offenses described in the Mueller report, but that’s as far as they had gotten — arguments about whether it was a better idea to concentrate on whipping him at the ballot box next November or to begin what everyone acknowledged would be a long, drawn-out process of impeachment that was guaranteed to fail to remove him from office once he went on trial in the Senate.

Here’s what I can’t figure out. With Barr’s letter exonerating him, Trump was, effectively speaking, home free. Then why did he start stirring up the hornet’s nest of the 2016 election by sending his two poodles, Secretary of State Mike Pompeo and Attorney General William Barr, on a magical mystery tour around the world to stick their noses into some of the seamiest corners of the Mueller report?

I’m not talking about Trump pressuring the president of Ukraine to investigate his potential rival, Joe Biden, for wholly imaginary “corruption.” That little gambit of Trump’s, empty as it was, will probably lead to his impeachment by the House of Representatives before Christmas.

The seaminess I’m talking about happened more than three years ago, in March and April of 2016, when George Papadopoulos, one of Trump’s foreign policy advisers, met with a man named Joseph Mifsud, who described himself at the time as a professor at the University of Stirling in Scotland and a director of something called the “London Academy of Diplomacy.”

You may remember the outlines of what happened back then, in what amounted to the early days of Trump’s campaign for the presidency. Papadopoulos ran into Mifsud in Rome at a conference organized by something called the “Link Campus University,” which was somehow affiliated with the University of Malta, where Mifsud had taught. When they returned to London, Papadopoulos met with Mifsud again, and was introduced to a Russian woman whom Mifsud falsely identified as Vladimir Putin’s niece. He also introduced Papadopoulos to Ivan Timofeev, a Russian national who worked for a think tank in Moscow with close ties to Putin.

Mifsud and Papadopoulos met several more times, and after Mifsud made a trip to Russia in April, he returned to Moscow and over breakfast at a hotel told Papadopoulos that Russia had “dirt” on Hillary Clinton in the form of “thousands of emails” that officials in Moscow would be willing to share with the Trump campaign.

Over drinks in the bar of another London hotel, Papadopoulos told Alexander Downer, the Australian high commissioner to the U.K., about his contacts with Mifsud and about the“dirt” the Russians supposedly wanted to share with the Trump campaign. Downer in turn reported this to the London office of the FBI, which opened an investigation into the Trump campaign that would later morph into the Mueller investigation.

Mifsud told his girlfriend that he had high connections in the Russian government and was friends with Sergey Lavrov, the Russian foreign minister. This was at the same time Mifsud was bragging to Papadopoulos about his connections in Moscow and introducing him to Timofeev, the head of the Moscow think tank who was close to Putin.

With everything associated with Mifsud screaming “Russia! Russia! Russia!,” Papadopoulos has been going around telling anyone who will listen that Mifsud is most likely an “asset” if not an agent for the CIA or the Italian intelligence service. This is a line that Rudy Giuliani, who has apparently become Trump’s new Michael Cohen, has also been pushing.

Papadopoulos himself joined the dance of the seven veils of conspiracy buffs last week when he tweeted, “Mifsud was an Italian operative handled by the CIA. Italy holds the keys to the kingdom. Right government. Right time.”

Attorney General Barr was at that moment in Rome “to meet with Italian intelligence officers as part of President Trump’s efforts to discredit the investigation into Russian meddling in the 2016 United States election,” according to a report in The New York Times, published under the headline, “First Barr, now Pompeo: Italy is hub of impeachment inquiry for Trump officials.”

The Daily Beast reported this week that Barr showed up at the American embassy in Rome asking for two things: a secure room where he could meet with high-level officials from Italian intelligence, and an extra chair for U.S. Attorney John Durham, whom Barr had appointed to investigate the origins of the Mueller investigation.

The Italian justice ministry’s public records show that Mifsud had applied for police protection in Italy after disappearing from Link University, where he worked and, in doing so, had given a taped deposition to explain just why people might want to harm him. A source in the Italian Ministry of Justice, speaking on the condition of anonymity, told The Daily Beast that Barr and Durham were played the tape.

You’ve heard of the old phrase used to describe the world of intelligence, “a wilderness of mirrors?” Now we’ve got Barr and Pompeo sticking their noses down a wilderness of rabbit holes for Donald Trump, who remains convinced that the taint left on his election by the Mueller report will leave an asterisk by his name forever.