Mike Pence's not-so-secret plan: "He's focused on the White House" — but how soon?

Reporter Tom LoBianco on his political biography of the secretive veep: Christian nationalist or political schemer? 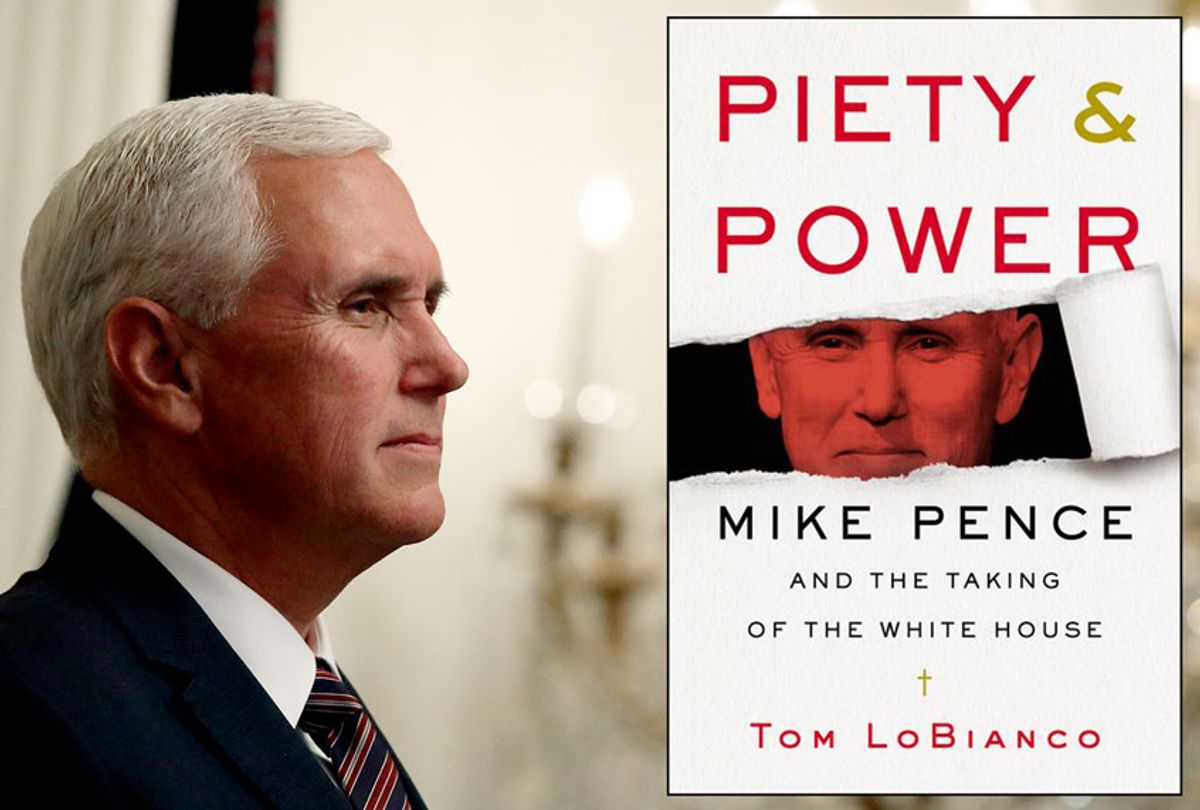 Mike Pence and Donald Trump are a political odd couple.

Trump is an unrepentant sinner who revels in lewdness, adultery, lies, bigotry, greed, corruption, cruelty, threats of violence and other vile behavior.

Pence presents himself as a man of deep faith, an evangelical Christian who is pious and righteous. By his own description, he prays on a regular basis, seeking God’s wisdom and direction to justify his behavior — and believes that God talks to him. It highly unlikely that Donald Trump is possessed by such delusions.

How do Trump and Pence able to work together as president and vice president? Their relationship is "transactional," to use the current term of art. Pence is a means for Trump to secure the unflinching support of right-wing Christians in their quest to overthrow the Constitution and conquer secular society.

In many ways the political calculus is a neat fit: Christian Dominionists and Reconstructionists are authoritarians who do not believe in democracy. Donald Trump, it would appear, shares the same worldview.

On the surface Pence and Trump seem to very different. But there is at least one area of overlap: Pence has been implicated in Trump’s scheme to abuse the powers of his office by extorting and bribing the president of Ukraine to interfere in the 2020 presidential election.

Democrats in Congress have finally launch a formal impeachment inquiry against Donald Trump for his abuse of power and many apparent crimes, as well as his overall betrayal of his oath of office. Given his involvement in the Ukraine scandal, Pence could face serious consequences as well.

Given his religious beliefs, how has Mike Pence personally rationalized his relationship with Trump? Does Pence wield influence and power over the president he has served so loyally? Is Pence a Rasputin-like puppet master, as some have surmised? Does Pence sees himself as a crucial tool of God’s will, with the presidency as his ultimate destiny?

In an effort to answer these questions I recently spoke with Tom LoBianco. He has covered the Trump White House as a political reporter for the Associated Press. LoBianco is also a regular political analyst for MSNBC, NPR, CNN and other broadcast outlets. He is the author of the bestselling new book "Piety & Power: Mike Pence and the Taking of the White House."

There is a narrative in some circles that while Donald Trump is a threat to American democracy and a horrible person in so many ways,  Mike Pence is the bigger threat long-term. After writing “Piety & Power,” what did you conclude?

I started covering Pence back in 2011 for the Associated Press. I never went too deep on covering him. He is unflappably boring. That, from what I've seen, tends to work in Pence’s favor. This helps him to elude scrutiny. Many of my Democratic, more liberal friends want to know if Mike Pence is really Trump’s puppet master. Is Pence really in the driver’s seat? If Trump is impeached then, presumably, Pence is president. What are the American people getting then? Based on Pence’s career and what I have learned in researching the book, I believe that Mike Pence would just be a more conservative version of George W. Bush. Pence is a political chameleon. He changes throughout his career.

In terms of the extremes, on one hand Pence is like a glorified coatrack. For example, take the meeting in the Oval Office after the Democrats won the midterms and took the House of Representatives. Pence is in the meeting just trying to fade into the background. The other extreme caricature of Pence is that he is secretly running everything. In that version of the story Pence is covertly placing Christian right-wing activists inside every department and nobody knows about it. Neither one of those dichotomous versions of Pence is correct.

Pence has a few lanes of policy that he's very strong in and takes as his own. Clearly the social conservative policies — “pro-life,” anti-abortion and the like — he keeps for himself. Pence has very strong influence over the Department of Health and Human Services. He did stock the agency with a lot of his confidants — but it's not widespread.

The other thing to understand about Pence is that he and Trump have a warm relationship. It is a good working relationship, but it's not a close relationship.

It is easy to create exaggerated caricatures of public figures and to assign all manner of devious intent and Machiavellian scheming to their lives and goals. In Mike Pence’s mind, what does he want? Who is he in his own story?

I did not see Mike Pence as having the type of ambition to push Donald Trump off the proverbial cliff, either through impeachment and Trump’s removal or some other means. This is largely because Pence’s own advisers see a better path for him in 2024 to win the presidency in his own right. Pence’s advisers are playing a long game.

I talk a lot about Karen Pence [the vice president's wife] in the book. When we look at Pence’s life chronologically, it all becomes clearer. Pence is in college and then he's in law school in the late '70s and early '80s. He is very talkative. He loves just gabbing with people about politics, but he does not get active in politics until 1986. That is the year Pence graduates from law school. One year after that, he's married to Karen Pence.

Karen is the one who focuses all that energy and puts it in one direction towards Mike Pence becoming active in politics. Mike and Karen Pence did not start with their eyes set on the White House. I did not see sincere focus from Pence and the people around him for the White House until 2008.

How has Mike Pence rationalized — as a supposed “Christian” — serving an unrepentant overtly wicked person such as Donald Trump?

One of the most fascinating things I heard from some of Mike Pence's friends were the biblical allegories that they use to try and explain how Pence is working with a great sinner like Donald Trump. They use the "Cyrus prophecy" from the Bible, of course. They also reference Daniel from the Bible as well. In their view Mike Pence is like Daniel, the faithful servant to God put in the court of the decidedly ungodly tyrant. They see that Pence is the Jewish slave who is in touch with God, who is carrying out God's wishes and keeping things on track.

Some of Pence's advisers prefer Joseph and the pharaoh. But it is the same dynamic: you have a godly servant, the Jewish slave, working under a tyrant, Pharaoh, and the idea is that God, working through the servant, will help keep everything on track. The irony is that more secular types in the Republican Party also make a version of the same argument.

Does Mike Pence believe that he is a tool of God?

I had a really good conversation with David McIntosh, the president of the right-wing group Club for Growth. He is longtime friends with Pence. They are from the same style of right-wing Christian evangelicalism. I asked him, "What does it feel like when you pray?" I asked because there are these stories about how God talks to Mike Pence. This might not be a literal thing. For people of that faith it is something spiritual.

McIntosh said, "For each person, it's individual, hearing the right answer." There's a man named Rob Schenck who used to be a member of the Christian right. He was part of groups that would chain themselves to abortion clinics, back in the '90s, to stop people from going in. Schenck broke with the Christian right initially on gun control a few years ago, but I think Donald Trump was the final thing for him. He used to pray with Mike Pence in Congress.

One thing Schenck noticed about Mike Pence is that whenever you would pray with Pence when he was uncertain about something he would always look down at the floor. Schenck said that Mike Pence seemed unsure of things. He believes that Mike Pence has what is called a “discipleship problem.”

Secular Mike Pence, the one with the ambition, has not given way to Christian Mike Pence, the follower of Jesus. Pence has not given himself over entirely to following Jesus. To me that was fascinating as most observers tend to see it the other way. In that view, the religious Mike Pence is the driving force. That's the dominating force. So here's the evangelical minister saying, "No, he is not. It's a discipleship problem." The only person who knows the final answer is Mike Pence.

Does Mike Pence believe in secular democracy, or does he think that America is supposed to be some type of Christian theocratic or fascist republic?

Mike Pence is not a theocrat. Does Mike Pence believe that policies should be put in place that will hasten the end of the world to bring in a paradise under Jesus' rule, the Second Coming, the end of the world? When I talked to Pence’s friends about this, they told me they never heard such things from him. It just doesn't come up. I went to a service at the College Park [Maryland] church that Pence used to attend, in order to get a sense of what influenced his faith. Was there hellfire and brimstone talk at this church? What is the type of practice?

From what I gleaned, that was not part of the religious practice there. I did not hear Pence talking like a theocrat. However, I did hear Pence hinting at it. As vice president, Pence has given speeches to groups like John Hagee's Christians United for Israel. When Pence talks with them, he speaks about Donald Trump's fulfilling of the prophecy and “the promise of 70 years.”

I asked an evangelical historian about that language and whether he thinks that Pence is a true believer, in terms of Christian Dominionism and Reconstructionism. Is Pence a "premillennial dispensationalist"? That scholar’s conclusion was that Pence is not 100% with Hagee and the views of others who think like that. It is more likely that Mike Pence is just playing to them.

Has your view of Mike Pence been changed through the process of writing “Piety & Power”?

I became much more empathetic and sympathetic towards Mike Pence than when I was covering him on the day-to-day. I think part of that was I could see where things fit in his life and why he was doing certain things. To me, at least, Mike Pence became more human the more I found out about him. Part of this is because Pence, politically, is a very secretive character. That's why there's so much that's new inside the book. By default, writing about Pence, you empathize with him.

But of course, my job as a reporter is to try to remain neutral and try to find out as much as possible and understand the context of it. What I came away with — and did not see before — is that Mike Pence is supremely political. He does have an incredible amount of ambition. As it stands now, Mike Pence’s eyes are definitely focused on the White House, certainly in 2024.