The "Jeopardy!" host goes public to own the narrative to his cancer story 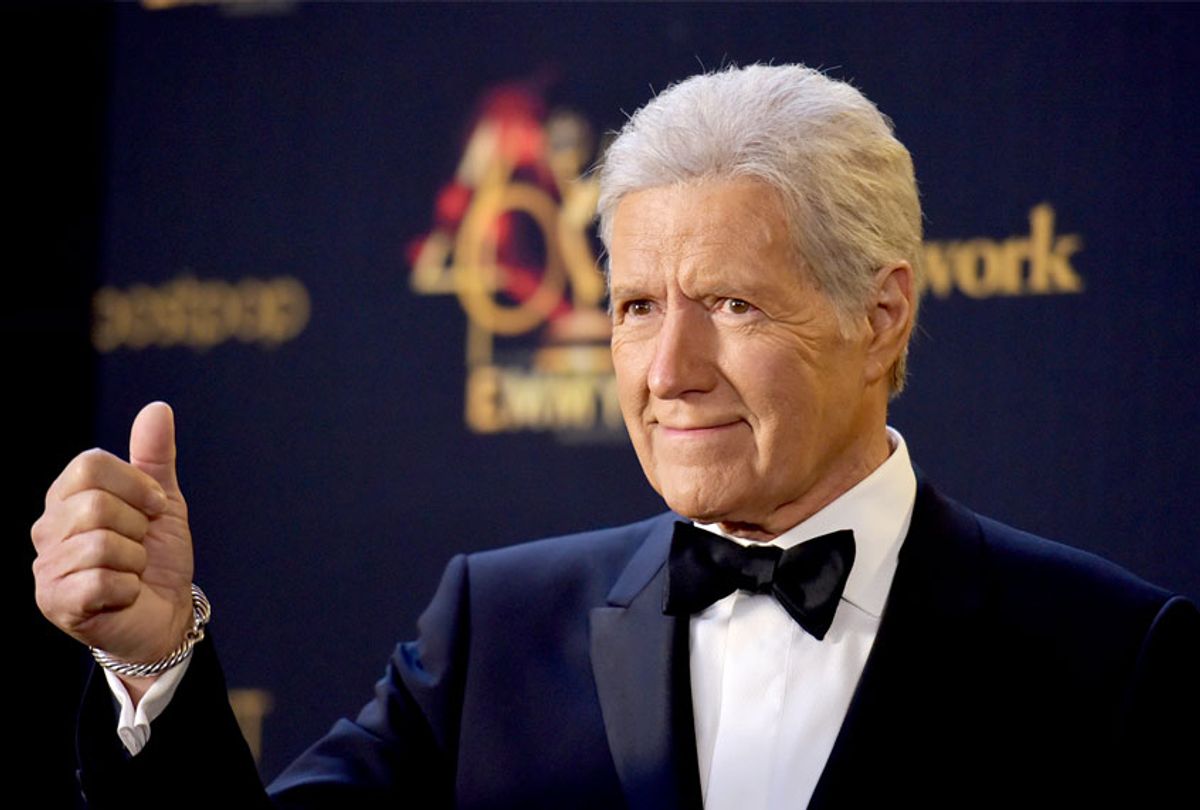 Alex Trebek poses in the press room at the 46th annual Daytime Emmy Awards at the Pasadena Civic Center on Sunday, May 5, 2019, in Pasadena, Calif. (Richard Shotwell/Invision/AP)
--

My favorite part of “Jeopardy!” Is always when Alex Trebek, the man who is holding all the correct responses in his very hand, gently conveys his disappointment in the contestant who gets it wrong. There’s that little pause of Canadian restraint, as if to say, “I thought it was obvious,” before his devastating, “I’m sorry but of course we were looking for James Monroe/Liechtenstein/igneous rock.” It’s a moment of suave confidence in an uncertain world, a reassurance that some things are just right. But when it comes to his latest challenge, without a stack of facts in front of him, somehow Trebek seems even more poised than ever.

Back in March, the 79-year-old game show host went public with his diagnosis of Stage 4 pancreatic cancer, posting a video on the show’s  social media announcing that “The prognosis for this is not very encouraging, but I’m going to fight this, and I’m going to keep working. And with the love and support of my family and friends and with the help of your prayers, also, I plan to beat the low survival rate statistics for this disease.” He also joked that “I have to, because under the terms of my contract, I have to host ‘Jeopardy!’ for three more years.”

His plan appeared for a time to have worked, because just two months later, he declared that he was “near remission” and that “The doctors said they hadn’t seen this kind of positive result in their memory…  some of the tumors have already shrunk by more than 50 percent.”  It was an astonishing outcome for a patient with a disease that has a notoriously poor prognosis.

Trebek’s health crisis also happened to coincide with one of the most attention-grabbing periods in his show’s history. In April,  James Holzhauer, a  savant "Jeopardy!" strategist born the same year that Trebek started hosting the show, moved in to the champion position and then stayed there for 32 more episodes. Holzhauer became a pop culture juggernaut, fueled in part by the buddy cop energy he and Trebek generated. In June, Holzhauer kicked in $1,109.14 to a pancreatic cancer fundraiser in his hometown, in honor of “Alex Trebek and all the other survivors.”

But after a seemingly successful course of chemo that Trebek described in September as “a bit premature and over optimistic,” he announced he’d unsuccessfully  tried immunotherapy and was back in chemo. “Please keep me in your good thoughts and prayers,” he said. Then, last week, Trebek sat down with  CTV’s chief anchor Lisa Laflamme for an honest conversation about life and death. He was visiting  Canada to give his alma mater, the University of Ottawa, funding for the Alex Trebek Forum for Dialogue, an initiative to present “speakers and guests with a wide range of perspectives and ideas” to the school.  Because in real life, solutions are rarely decisively settled by  the encyclopedia.

After 8,000 episodes, Trebek said that he intends to keep doing “Jeopardy!”   “as long as my skills do not diminish,” adding, “There are weaknesses I feel in my body but I can always suck it up when it comes to tape the show.” But he also confessed that his chemo-related mouth sores are making it hard to enunciate as well as he’d like. He admitted, “I’m sure there are observant members of the television audience that notice also, but they’re forgiving.  But there will come a point when they will no longer be able to say, ‘It’s okay.’”

Trebek’s story, as cancer narratives typically go, has been explained in the media  as a “battle” — a term that many of us who’ve experienced the disease find simplistic and insensitive. Even a person whose career has been framed in the context of declaring winners and losers can see there are other ways to look at it. And I don’t want Alex Trebek to not be around, just like I’d like a world with Bob Newhart and Betty White and Jimmy Carter, in perpetuity. But the term here is finite, and we can prepare for death and grieve for it and yet not deny its inevitability. If mortality is a battle, then you should know that the house always wins.

“One thing they’re not going to say at my funeral, as a part of a eulogy,” Trebek told Laflamme, “is ‘He was taken from us too soon.’” It’s a singularly  graceful attitude, one that runs poetically contrary to our death-denying, extend-life-at-all-costs American mindset and healthcare system. “I’m not afraid of dying,” he said. “I’ve lived a good life, a full life, and I’m nearing the end of that life. If it happens, why should I be afraid of that?” Why should any of us?

If Alex Trebek and his 35 years of “Jeopardy!” have taught us anything, it’s not the names of world capitals or notorious opera singers. It’s that the answers aren’t what count. All that matters is asking the right questions. Life hands us illness and side effects and limited time. And the question, always, is “Why should I be afraid?”