"I’m not sending anyone to jail yet, but it’s good to know I have that ability,” a judge told department lawyers 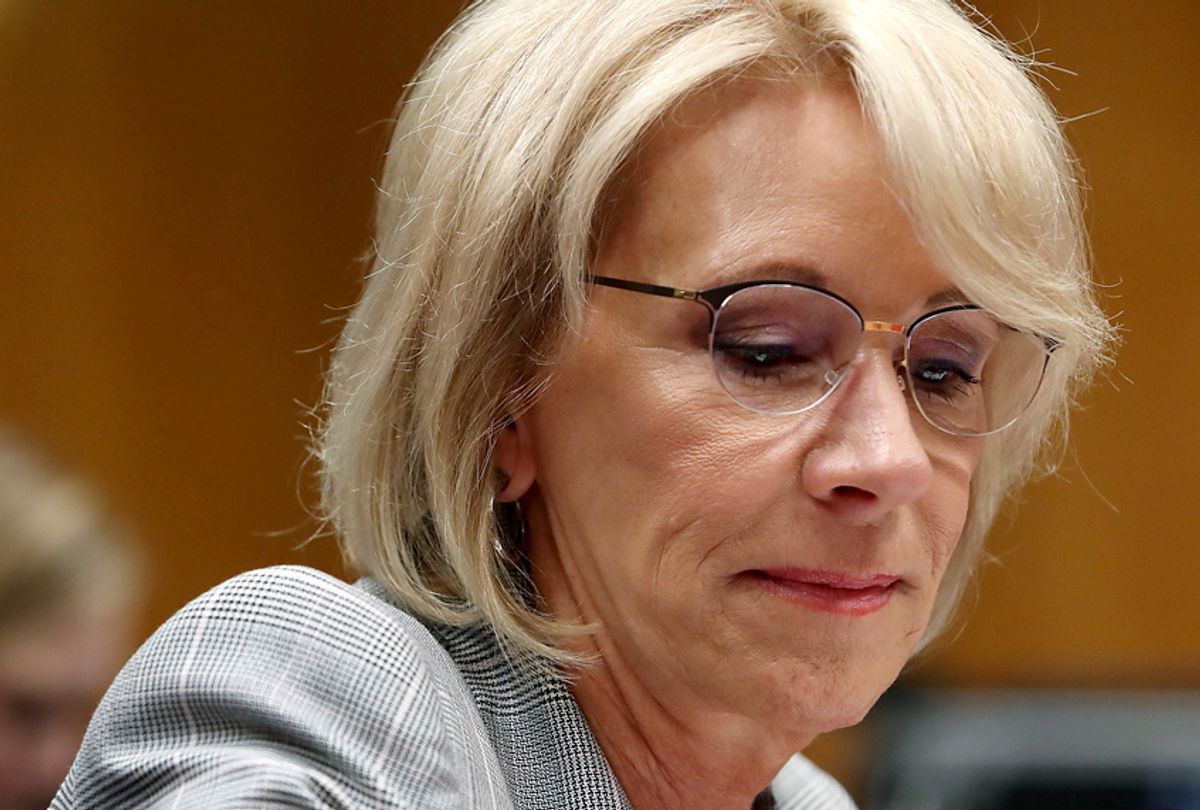 Secretary of Education Betsy DeVos was threatened with jail time after continuing to collect student loan debts from individuals whose loans to a scandal-ridden and bankrupt for-profit college were legally voided.

“I’m not sure if this is contempt or sanctions,” U.S. Magistrate Judge Sallie Kim reportedly told Education Department lawyers Monday at a hearing in San Francisco. "I’m not sending anyone to jail yet, but it’s good to know I have that ability."

“At best, it is gross negligence," the judge continued. "At worst, it’s an intentional flouting of my order.”

In response to her warning, education lawyer Charlie Merritt told Kim the department would “bring ourselves into full compliance."

The issue in question involved former students at Corinthian Colleges Inc., which was once one of the largest for-profit college chains in the country and running institutions including WyoTech, Heald and Everest. After facing numerous government investigations and lawsuits for systemic fraud, Corinthian filed for bankruptcy protection from creditors in 2015. As a result, the federal government determined, through its Borrower Defense to Repayment program under former President Barack Obama, that up to 335,000 former students could void their debt and receive a refund on their past payments.

When DeVos took over the Education Department, she ignored roughly 160,000 applications for loan forgiveness until 80,000 individuals won a class action lawsuit compelling her to stop pursuing their loans. But DeVos’ department continued to collect former Corinthian students’ debt, including garnishing tax refunds and wages in spite of a court order. More than 16,000 former students at the college were told that they had payments due on their student loans, with 1,800 reportedly losing wages or tax refunds as a result, according to Newsweek.

The move appears to be consistent with DeVos’ broader policy of limiting the scope of the Borrower Defense to Repayment program for students who were defrauded by predatory schools. Last October, she lost a major court battle over consumer protections for Americans who take out student loans when U.S. District Judge Randolph Moss rejected a request from a group representing for-profit colleges to eliminate the Obama-era regulations.

At the time, Steve Gunderson, president and CEO of Career Education Colleges and Universities, said he hoped DeVos would defy Moss’ decision.

"There are many examples of both the Obama administration and the Bush administration before that choosing not to implement or enforce rules of the previous administration, because they do not agree with such rules," Gunderson said. "The Trump administration should have the same authority to do so.”

The plaintiffs in the 2018 Corinthian case included Jennifer Craig, who was defrauded by Corinthian while studying to obtain work in medical insurance and billing. The Education Department decided to only discharge 20 percent of her loan and refused to provide a detailed explanation as to why. Similarly, Alina Farajian took out loans to become a medical assistant after being misled about the likelihood that the college she attended could get her a job in that field; she was told that only 30 percent of her loan would be discharged.