The politics of the Joker, explained 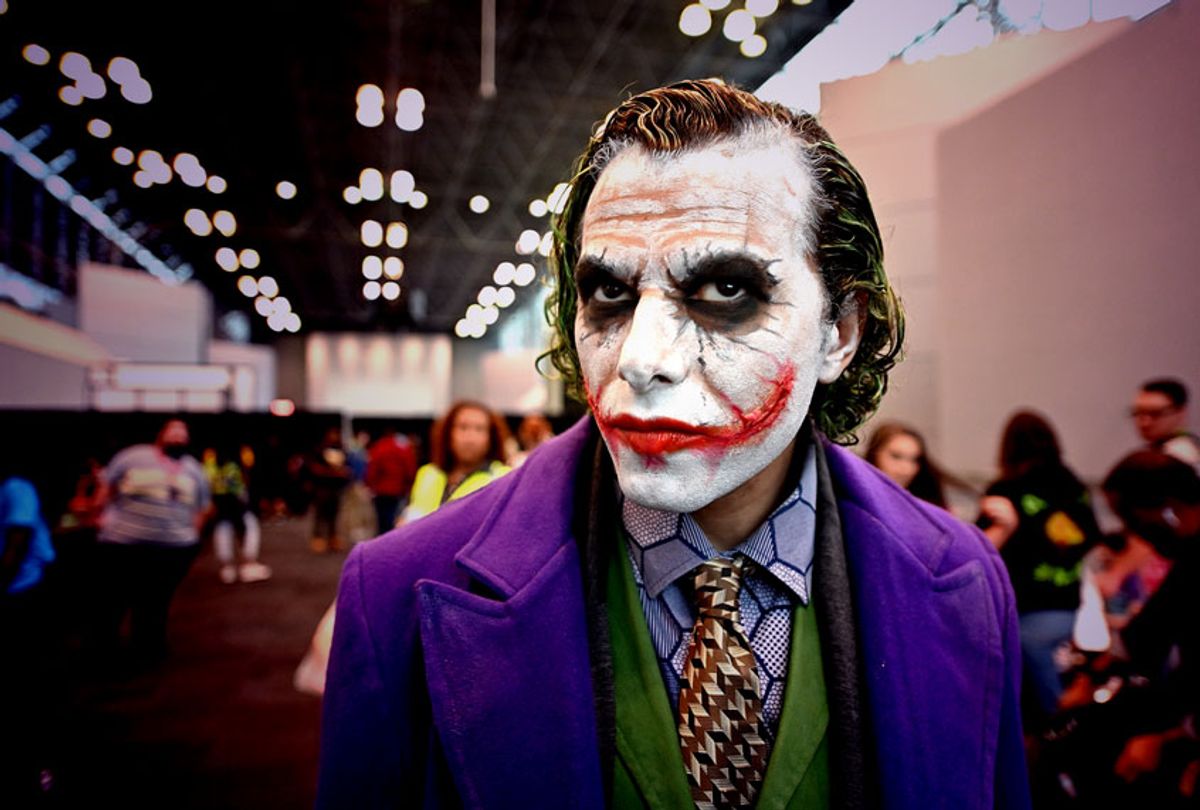 Politics is inextricably linked with popular culture, and few characters are as fraught with political meaning as those who have appeared in America’s recent Batman films.

As comic book fans flock to cinema to see “Joker,” the new Todd Phillips film about the iconic clown prince of crime starring Joaquin Phoenix in the title role, let's take a closer look at cinematic depictions of the title character:

The shooting at a screening of “The Dark Knight Rises” in 2012 actually had nothing to do with the Joker.

This touches on a particularly sinister urban legend. After mass shooter James Holmes murdered 12 people and wounded 70 others at the Century 16 theater in Aurora, Colorado, many media outlets erroneously reported that he had dyed his hair orange and referred to himself as “the Joker” after being arrested. Although Holmes did dye his hair, George Brauchler, the 18th judicial district attorney and prosecutor of the case, said the fact that a Batman film had been playing at the cinema where the shooting transpired was incidental.

Despite the fact that the Joker had nothing to do with the shooting, the cinema announced that it would not screen the new film out of respect for the victims and their families.

“The Dark Knight” was widely perceived as having a neoconservative bias, with Batman representing the security position of President George W. Bush and the Joker standing for the abstract concepts of terrorism, chaos and anarchy.

When the film was first released in 2008, the last year of the Bushera, Andrew Klavan of the New York Times wrote that the year’s biggest blockbuster was “at some level a paean of praise to the fortitude and moral courage that has been shown by George W. Bush in this time of terror and war. Like W, Batman is vilified and despised for confronting terrorists in the only terms they understand. Like W, Batman sometimes has to push the boundaries of civil rights to deal with an emergency, certain that he will re-establish those boundaries when the emergency is past.”

This interpretation has been supported by other pundits, including Josh Xiong of the Encyclopedia Britannica blog and Leon Thomas of Renegade Cut, who captured the same points even if they did not necessarily share Klavan’s assent. After all, this is a film in which the hero tortures people, violates national and international law and engages in mass spying in order to stop a villain who just wants to watch the world burn. While the Joker is certainly not a theocrat in the vein of Islamist terrorists, his anarchic philosophy is accurately summed up in his famous monologue to District Attorney Harvey Dent:

"You know what I've noticed? Nobody panics when things go 'according to plan.' Even if the plan is horrifying! If, tomorrow, I tell the press that, like, a gang banger will get shot, or a truckload of soldiers will be blown up, nobody panics, because it's all 'part of the plan.' But when I say that one little old mayor will die, well then everyone loses their minds!”

The image of the Joker was used to ridicule Barack Obama in one of the most famous examples of right-wing street art during his presidency.

The image shows Obama’s face with photoshopped make-up made to look like that worn by the character of the Joker in “The Dark Knight.” The word “socialism” appears underneath the banner, thereby conflating the Joker’s malevolent agenda with an ideology which conservatives wrongly ascribed to the Obama administration. (Obama was, in fact, center-left). Yet the poster grated not merely because it tastelessly compared a progressive politician with a comic book villain but also because it did so by lightening the skin of America’s first African-American president.

As Ben Walters wrote in the Guardian in 2009, “The simple fact of publishing an image of a black president with his face covered in white greasepaint but for the eyes and a red slash of a mouth can't help but evoke a minstrel aesthetic, even if it's in reverse.”

When the image was used to promote a strip club in Virginia, the NAACP turned out and protested it as being racist.

The Joker isn’t the only famous Batman villain who has been appropriated to advance a right-wing agenda.

The character of Bane from “The Dark Knight Rises” has become something of an icon among the alt-right, who embrace his anti-elitist message as a reflection of their own values and has been referenced in hate speech in response to Black Lives Matter protesters and across the most vile, trolling corners of the Internet. (Full disclosure: One of America’s most prominent neo-Nazis, Andrew Anglin, wrote an anti-Semitic hit piece about this journalist while quoting the character.) When Trump used music from “The Dark Knight Rises” in one of his re-election commercials, it was recognized as a dogwhistle and removed after Warner Bros. raised its hand in protest.

“Joker” tells the story of Arthur Fleck, a rent-a-clown with severe mental health issues who is repeatedly mistreated by society and eventually becomes violent. The concern seems to be that, while Fleck’s story is not a direct parallel to those of the types of right-wingers who become violent, there are enough similarities that the film could inspire future acts of violence.

"In America, there is a mass shooting or attempted act of violence by a guy like Arthur practically every other week,”  Stephanie Zacharek wrote in “Time Magazine.” "And yet we’re supposed to feel some sympathy for Arthur, the troubled lamb; he just hasn’t had enough love.”

Zacharek's views were echoed by David Ehrlich in IndieWire, who described the film as “a toxic rallying cry for self-pitying incels, and a hyper-familiar origin story so indebted to ‘Taxi Driver’ and ‘The King of Comedy’ that Martin Scorsese probably deserves an executive producer credit.”