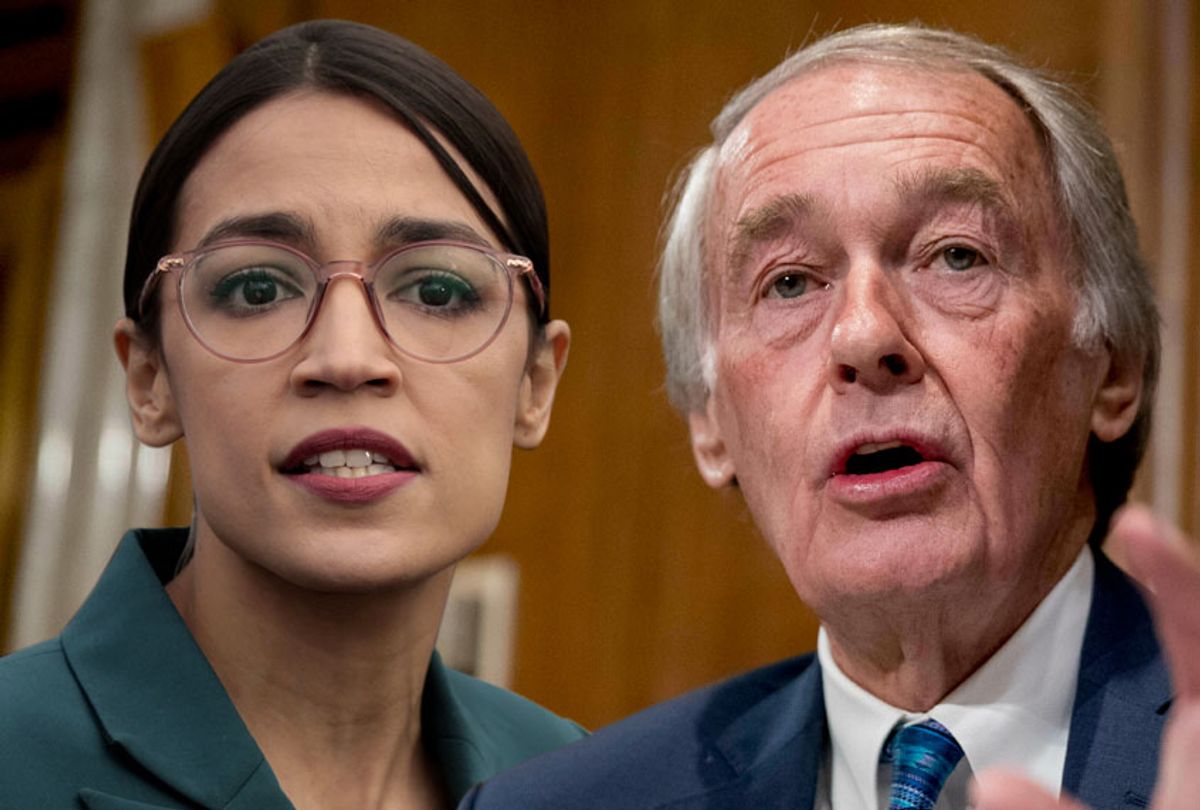 Rep. Alexandria Ocasio-Cortez took aim at her former rival, Joe Crowley, in an email to supporters that presented the Democratic Senate primary in Massachusetts between incumbent Sen. Ed Markey and challenger Rep. Joe Kennedy III as an unlikely battle between their party's progressive and establishment wings.

"While Ed Markey is fighting for the Green New Deal in the Senate, Joe Kennedy is getting campaign support from Crowley hosting a high-dollar fundraiser on October 15th," Ocasio-Cortez's team wrote in an appeal for donations that would be split between her and Markey.

"Joe Kennedy thinks that with the backing of the establishment and the old guard of the Democratic Party that he can beat a progressive champion for justice," Ocasio-Cortez added. "Let's show Kennedy that he's wrong."

Crowley, the longtime member of Congress from New York's 14th district who lost to Ocasio-Cortez in the 2018 Democratic primary, is listed as a "host" for an Oct. 15 fundraiser for Kennedy hosted by lobbyist Tracey Spicer.

The event, according to reporting from The Boston Globe, asks attendees from different tiers to donate to Kennedy's effort to depose Markey:

According to the invitation, hosts for the fund-raiser are asked to give $5,600 to Kennedy's campaign — the maximum amount an individual can give for the primary and general election, combined. The invitation asks "co-hosts" to pony up $2,800, "supporters" to give $1,000; and "friends" to contribute $500.

The timing of Crowley's insertion into the race comes weeks after Ocasio-Cortez endorsed Markey, her Senate co-sponsor for the Green New Deal.

A Kennedy campaign official, speaking on background, told Common Dreams that Crowley and Kennedy's friendship is longstanding and that Crowley's presence in the race has nothing to do with Ocasio-Cortez.

"They are genuinely close friends and have been for a long time," said the campaign official.

As Sludge pointed out on Oct. 4, Crowley's post-Congress career has set him up nicely to raise cash and wield influence:

Crowley is not just the guy whom AOC beat; he is now senior policy advisor at Squire Patton Boggs, a powerful D.C. lobbying firm that represents large corporations such as oil company Royal Dutch Shell, Management and Training Corp. — the third largest private prison company in the U.S. — and insurer UnitedHealth Group.

The juxtaposition of Ocasio-Cortez, the political upstart whose primary challenge upset the Democratic Party's national order, endorsing the incumbent Markey — with her establishment opponent backing Kennedy, who is running on a message of change — was not lost on Boston-based political activist Jonathan Cohn.

The Globe's reporting appears to bear out that perception of the race's dynamics.

The paper gave a rundown of a who's-who expected to attend the Oct. 15 fundraiser:

Former (Ted) Kennedy staffers listed on the invitation include Stephanie Cutter, who went on to serve in the Obama administration and as deputy campaign manager for President Obama's 2012 reelection campaign, among other roles; David Bowen, who served as staff director for the Senate Committee on Health, Education, Labor, and Pensions when the elder Kennedy was its chairman, and played a major role in drafting and steering the Affordable Care Act through the Senate; and Tom Lopach, a former executive director of the Democratic Senatorial Campaign Committee who is currently working on Montana Governor Steve Bullock's presidential campaign.

In her email to supporters, Ocasio-Cortez said the stakes for the Massachusetts primary are clear.

"We need to help keep Markey in the Senate where he has a proven record of fighting for transformative change," said Ocasio-Cortez.