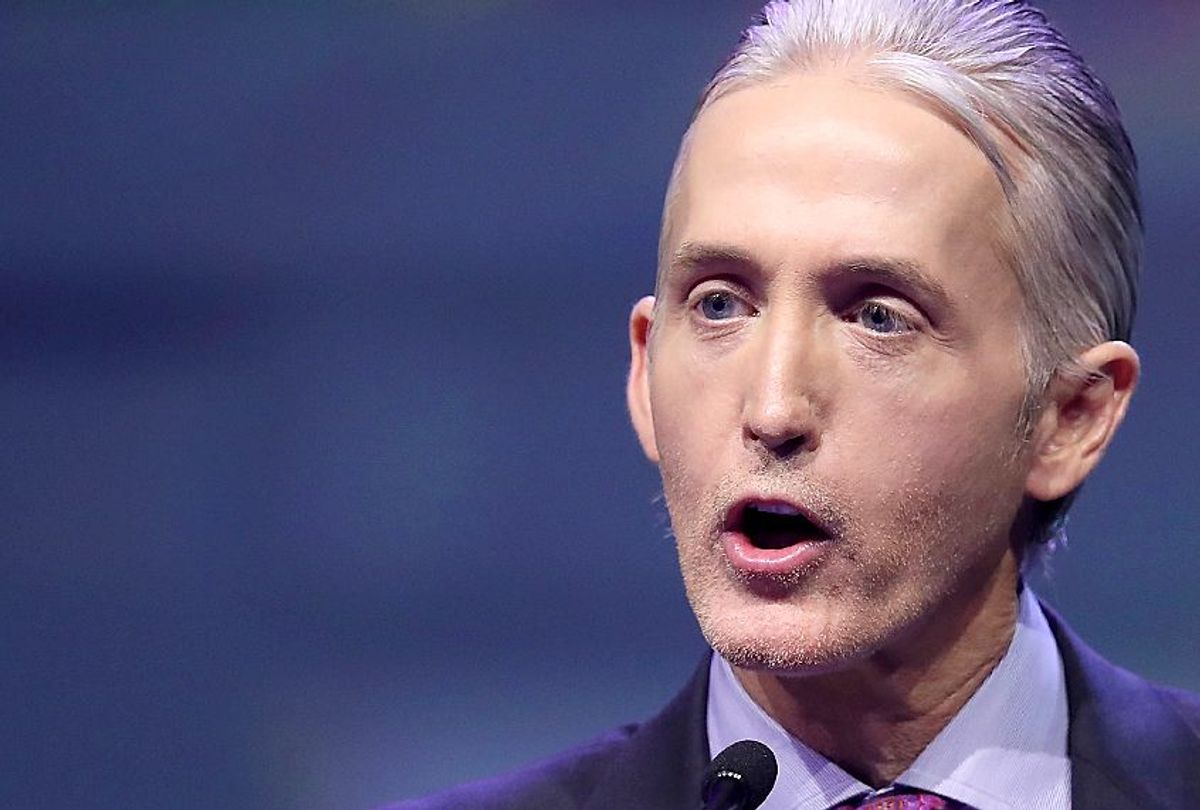 President Donald Trump has retained former Rep. Trey Gowdy, R-S.C., to serve as his outside counsel in the House impeachment inquiry.

Gowdy, the former chairman of the House Oversight Committee who led the years-long investigation into future Democratic presidential candidate Hillary Clinton and the 2012 terrorist attack on U.S. diplomatic facilities in Benghazi, Libya, did not seek re-election in 2018 after eight years in Congress. Two sources confirmed Gowdy's addition to the president's legal team to CNN, the outlet which first broke the story.

After leaving the House of Representatives, the former prosecutor returned to the private sector as an attorney and a Fox News contributor. Fox News terminated Gowdy’s contract on Wednesday after news broke that he was tapped by Trump, who is a frequent viewer of the right-leaning cable channel.

Gowdy, who will not work from within the administration, was seen at the White House Tuesday before it issued a letter to House Speaker Nancy Pelosi announcing that Trump would not cooperate with the House impeachment inquiry.

“Never before in our history has the House of Representatives — under the control of either political party — taken the American people down the dangerous path you seemed determined to pursue," the White House counsel wrote. "Put simply, you seek to overturn the results of the 2016 election and deprive the American people of the president they have freely chosen.”

“Given that your inquiry lacks any legitimate constitutional foundation, any pretense of fairness or even the most elementary due process protections," Cipollone continued, "the executive branch cannot be expected to participate in it."

The letter, signed by White House counsel Pat Cipollone, argued that the inquiry was illegitimate because Trump would not be allowed to “cross-examine witnesses” or exact similar rights guaranteed to Americans during a trial. But in the impeachment process, the House does not actually hold a trial. If the lower chamber did vote to impeach Trump, a trial presided over by the chief justice of the Supreme Court, who was appointed by former President George W. Bush, would then be held in the Senate, which is controlled by Republicans under the helm of Majority Leader Mitch McConnell, R-Ky.

Gowdy is no stranger to congressional investigations after waging a years-long legislative assault on Clinton the Obama administration over its handling of Benghazi, which claimed the lives of former Ambassador Chris Stevens and three other Americans. Gowdy's select committee on Benghazi issued an 800-page report in June 2016 after interviewing nearly 100 witnesses, including a daylong session with Clinton, who told lawmakers there were clear dangers in Libya but “no actionable intelligence" indicating a planned attack. The document faulted the Obama administration for the security lapses which led to the four deaths and suggested that Clinton had not sufficiently addressed the risks posed to the U.S. mission in Benghazi.

Democrats soon released their own report, which accused Gowdy’s committee of pushing “conspiracy theories that have no basis in reality.” The document alleged that Gowdy had used the attack to pursue a biased “political crusade.”

"Decades in the future, historians will look back on this investigation as a case study in how not to conduct a credible investigation," the Democratic report said. "They will showcase the proliferation of Republican abuses as a chief example of what happens when politicians are allowed to use unlimited taxpayer dollars — and the formidable power of Congress — to attack their political foes."

Gowdy later admitted that there was nothing the Obama administration could have done in order for backup troops to reach Benghazi faster after the attack. He also conceded to Fox News that his Benghazi committee was an “unmitigated failure." As Salon's Matthew Rozsa wrote, the hyper-partisan "investigation into Hillary Clinton failed to produce any lasting or damaging results against the then-presidential candidate." About $7 million in costs were incurred in the more than two years between when the committee was formed in May 2014 and its report was released.

But while Nunes pushed Trump’s talking points and issued a GOP memo in 2016 claiming that the FBI had abused its surveillance authority after Trump accused the agency of “spying” on him, Gowdy broke with his colleague on the issue. Backing Mueller, he repeatedly undercut Trump’s claims that the Obama administration had spied on him.

Gowdy’s role on Trump’s legal team could also potentially cause friction with personal Trump attorney Rudy Giuliani, who severely criticized the former congressman for defending the FBI probe into the Trump campaign’s ties to Russia. “He sure screwed that one up," Giuliani said in May 2018. "You got four families that do not think that Trey Gowdy did his job."

Gowdy’s 2012 stance on subpoenas could also come back to haunt him as the White House refuses to comply with congressional demands and subpoenas to turn over documents and produce witnesses.

“The notion that you can withhold information and documents from Congress no matter whether you are the party in power or not in power is wrong,” he said at the time. “Respect for the rule of law must mean something, irrespective of the vicissitudes of political cycles.”