After Trump's chummy chat with Turkish president, U.S. will back off while Turkey attacks longtime American allies 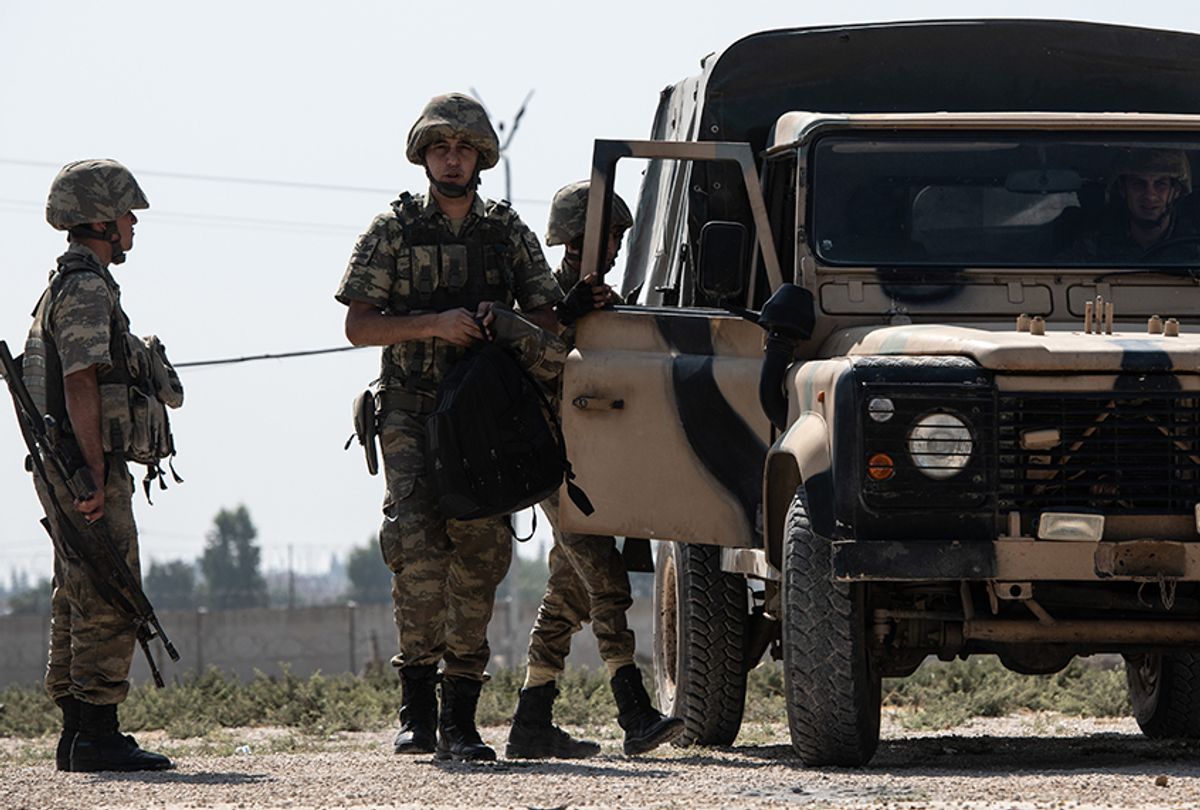 Turkey launched a military operation into northern Syria aimed at pushing back Kurdish forces who played a critical role in the United States’ fight against ISIS.

Turkish President Recep Tayyip Erdogan announced on Twitter that his military had launched an operation targeting Kurdish militia groups in the region. Erdogan claimed the mission was to “prevent the creation of a terror corridor” on Turkey’s southern border and to “neutralize terror threats against Turkey and lead to the establishment of a safe zone.”

Mustafa Bali, a spokesman for the U.S.-backed Syrian Democratic Forces, wrote on Twitter that the Turkish military was targeting “civilian areas.”

“There is a huge panic among people of the region,” he said.

The long-planned operation came after President Trump gave Erdogan the green light to attack the Kurdish forces within Syria, which Turkey considers a terrorist threat. According to The New York Times, Trump spoke to Erdogan before announcing the withdrawal of U.S. troops from the region. A National Security Council official who heard the call later told Newsweek that Trump was “definitely out-negotiated and only endorsed the troop withdraw to make it look like we are getting something.”

The Syrian Democratic Forces called the U.S. move a “stab in the back” and warned of a “humanitarian catastrophe” as a result.

“This attack will spill the blood of thousands of innocent civilians because our border areas are overcrowded,” the group said in a statement.

Kurdish leaders in the region called on locals to “move toward areas close to the border with Turkey to carry out acts of resistance,” the Times reported.

Trump has said that Turkey would be responsible for captured ISIS fighters in the region. Tens of thousands of ISIS fighters and their families are being held at camps currently overseen by the Syrian Democratic Forces. The group’s leaders told the Times that there have been no discussions with U.S. officials about turning over the camps to Turkey.

The Syrian Democratic Forces, which took control over areas liberated from ISIS, is aligned with the Kurdish Workers’ Party (PKK), which has been fighting against Turkey for decades. Mazlum Kobani, commander of the Syrian Democratic Forces, told the Times on Tuesday that his troops would now focus on fighting Turkish troops, which will require them to pull out of areas where ISIS remains a threat.

After Trump spoke with Erdogan, the White House said that the U.S. would not interfere with Turkish operations in the region. After widespread criticism from members of Congress and other officials, including many leading Republicans, Trump later threatened to “totally destroy and obliterate” Turkey’s economy if Turkish troops do anything he considers “off limits,” though he later praised the country as a good trading partner.

Trump insisted that the U.S. had “in no way abandoned the Kurds.”

But former top Trump administration officials said that was exactly what he was doing.

"We must always have the backs of our allies, if we expect them to have our back. The Kurds were instrumental in our successful fight against ISIS in Syria. Leaving them to die is a big mistake,” said Nikki Haley, Trump’s former UN ambassador.

Brett McGurk, Trump’s former envoy in the fight against ISIS — who resigned, along with former Defense Secretary Jim Mattis, after Trump threatened to pull all U.S. troops out of Syria — slammed Trump’s decision, saying it was reached with “no knowledge or deliberation.”

“He blusters and then leaves our allies exposed when adversaries call his bluff or he confronts a hard phone call,” McGurk tweeted.

Along with Democrats calling for Trump to change course, Republicans have been increasingly vocal in criticizing Trump on the issue.

Senate Majority Leader Mitch McConnell warned that U.S. withdrawal from the region “would only benefit Russia, Iran, and the Assad regime” and “increase the risk that ISIS and other terrorist groups regroup.”

Sen. Lindsey Graham, R-S.C., who chairs the Senate Foreign Relations Committee and has been an ardent Trump supporter, told Fox News that Turkey wants to “slaughter the Kurds” and that pulling out of the region would be the “biggest mistake of [Trump's] presidency.”

On Twitter, Graham warned Turkey not to press ahead with the attacks on northern Syria, even after Trump effectively endorsed them.

“To the Turkish Government: You do NOT have a green light to enter into northern Syria,” Graham wrote on Twitter. “There is massive bipartisan opposition in Congress, which you should see as a red line you should not cross.”